The "community social experience" of BINGO is at the heart of this show, a livestreamed 2021 Cincy Fringe production. 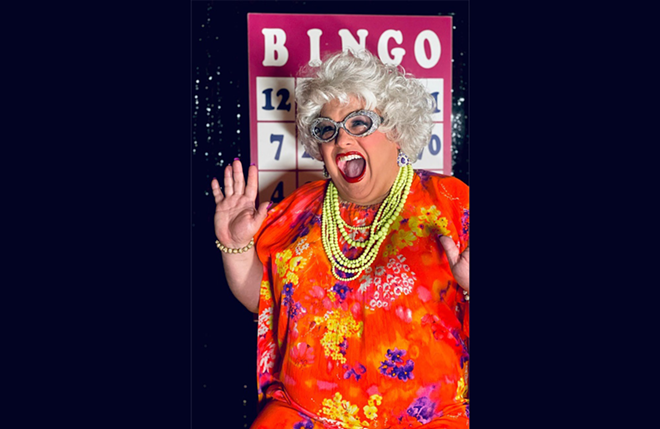 BINGO! For some, those words are like a clean, crisp ray of light brightening the dark dreariness of their lives. For me, they bring up warm fuzzy memories of times I took my mother to BINGO at the nursing home where she stayed before her death. We bonded over BINGO, waiting to see if the next number brought us a win. That "community social experience," to use Betsy Carmichael's own words in Betsy Carmichael LIVE at The BINGO Palace, is the heart of this show, a livestreamed 2021 Cincy Fringe production.

Betsy actually runs the show live for the assembled online audience at certain dates and times throughout the Fringe. I saw and enjoyed this show at the Borderline Festival in Cleveland a few years ago, and I was curious to see how it would translate to a live Zoom format. The answer is that it translates very well.

Betsy Carmichael, played by creator and co-writer Joey Bucheker, makes the show highly interactive and engaging. Before the show begins, audience members are emailed links to electronic BINGO cards so they can play as Betsy calls out the numbers. Audience members are encouraged to put on their cameras to participate in the different rituals that happen when each ball is called. For instance, we all sang "One" (Singular Sensation) from A Chorus Line when the number B1 came up.

Betsy was willing and eager to interact with the audience, so much two audience members did something touching that I won’t go into detail about so as not to spoil the surprise. This added level of audience interactivity heightened the energy of the show.

In keeping with BINGO tradition, when an audience member gets a BINGO, they receive prizes ranging from the whimsical (a good luck troll) to the grand prize of a frozen turkey.

Interspersed between the intense BINGO action are a series of touching vignettes about Betsy's BINGO upbringing and her life with her deceased husband George: Together they were considered the “Dynamic Duo of BINGO.” Also sprinkled in are a series of slightly naughty jokes about cracked balls and other double-entendres related to playing BINGO.

This was the first time Betsy Carmichael has taken this show onto Zoom and apart from issues with sound levels that were quickly resolved, it was a fun and entertaining journey through Betsy's life and what BINGO means to its devoted players. This show draws you into the action and highlights the possibilities of Zoom BINGO. It made my day.