"Get your sticky skins off me, you damn dirty grapes!" Stranded astronaut George Taylor's defiant pronouncement to his grape captors perfectly captures the wild and entertaining tone of this livestream. 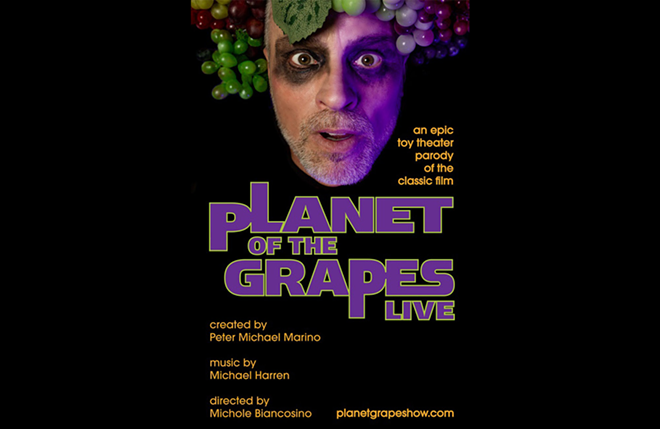 Photo: Provided by Cincy Fringe
Poster for "Planet of the Grapes Live"

"Get your sticky skins off me, you damn dirty grapes!" Stranded astronaut George Taylor's defiant pronouncement to his grape captors perfectly captures the wild and entertaining tone of Peter Michael Marino’s Planet of the Grapes Live. Inspired by the 1968 film Planet of the Apes starring Charlton Heston, this play gives the story a fruity twist. Apes become grapes, and humans become wine corks in this puppetry homage to the film.

According to Marino, the production takes inspiration from the European Toy Theatre movement, in which popular plays were done at home with paper replicas of actors, scenery, and props. For this production, the paper replicas are replaced with a wide range of different grape and cork puppets and a wide range of scenery reminiscent of the original film.

While this all sounds high concept, Marino’s show is fun, accessible, and at times thought-provoking. Planet of the Grapes is a show ideally suited for a livestreamed production, since the camera can get close to the action of the puppets that might be lost when viewing this show in person.

The dizzying array of puppets and scenery backdrops is both impressive and amazing to behold. Equally amazing is how Marino deftly manipulates the puppets and quickly and seamlessly changes scenes.

He is faithful to the 1968 film: the story preserves many of its darker notes. Planet of the Apes was a veiled commentary on racial and social unrest in America in the 1960s. Marino sets social commentary alongside the zaniness of the grape puppets and grape puns. It makes relevant observations go down smoothly, like Concord jelly on Rye toast.

Also worthy of note was Marino’s helpful preshow video offered five minutes or so before the main attraction. A scrolling banner across the bottom of the screen identified the the show, and an audio check asked if viewers could hear an audience buzzing in the background — a nice touch.

Planet of the Grapes was an expert production from beginning to end, a delight to watch and a strong compelling show. A hint for viewers: Be sure to use the full-screen setting. Otherwise, you might miss some of the visual elements at the top of the screen.