FRINGE 2021 REVIEW: On Maintenance (How to Keep a Life)

A faceted surface expands and contracts in a perpetual dance of construction and deconstruction – as if breathing, walking, digesting, thrashing, or embracing. Actors manipulate the surface’s panels, demonstrating the effort required to sustain life. 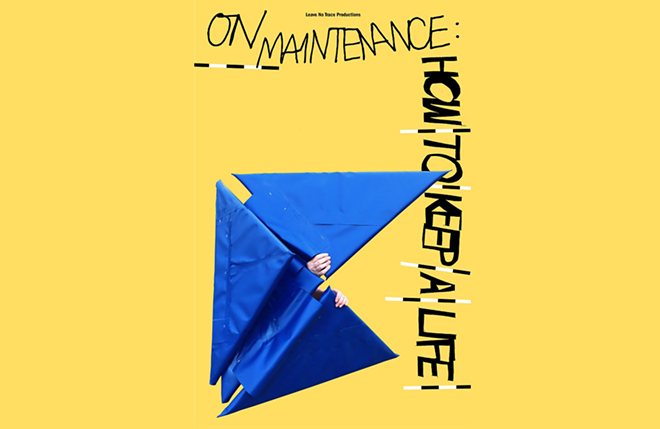 Photo: Provided by Cincy Fringe
Poster for "On Maintenance (How to Keep a Life)"

This wordless performance by Leave No Trace Productions from Cincinnati — On Maintenance (How to Keep a Life) — was described as “life-size origami, abstract puppet, theatre of objects.” It also said it would be “a faceted surface (that) expands and contracts in a perpetual dance of construction and deconstruction.” That gives some sense of the 50-minute performance.

Six dancers in navy blue jumpsuits marched in a line onto the Jackson Street Stage, each supporting a section of connected triangular blue panels that looked a bit like stadium seat cushions. The panels, in a square large enough to cover the small stage floor, were bound together with flexible strips that could be folded and rearranged in various configurations by the dancers.

Much of the time the performers, in various configurations from three to six dancers, tried to fold and animate the surface. They never achieved the precision that “origami” might suggest, and their actions and facial expressions — smiles, grimaces — seemed to suggest (perhaps intended) frustration with achieving the desired result. In some segments, dancers were beneath the surface, giving it the effect of rising and falling breath. For the latter half of the performance, more rhythmic motion was added, culminating in a segment of synchronized dancing with all six performers holding the surface over their heads. The final section had some of them seeking shelter beneath the surface and reclining into peaceful sleep.

The performance was accompanied by an immersive soundscape of rhythmic clicking and tapping, as well as sounds such as a thunderstorm and the night sounds of birds and animals. Sam Ferris-Morris and Justin West, two parts of the composing collective Intermedio, produced this affecting environment. Sometimes it was simply underscoring for the motion; the thunderstorm, in particular, provided specific motivation for seeking shelter beneath the surface.

The program described the action as resembling “breathing, walking, digesting, thrashing or embracing,” and added that the intention was to demonstrate “the effort required to sustain life.” Creator and director Renee Martin, in a program note, described her intention for the “surface” to become puppets, but when her performers began moving the structure, “an unwieldy being emerged.” I didn’t quite see that, being focused as much on the dancers as the material they manipulated: They often seemed to struggle physically, which might have been choreographed, but I was more drawn to their effort than to the imagery.

The production felt a tad too long and occasionally overly repetitive, but it was a valiant undertaking, one that surely took a great deal of concentration and coordination.