"The Park Cruising Diaries," written by Zak Kelley, is the deep dive into a year of sometimes-socially-distant-but-also-not-but-definitely-awkward-and-weird sexual experiences that “the app” couldn’t provide. 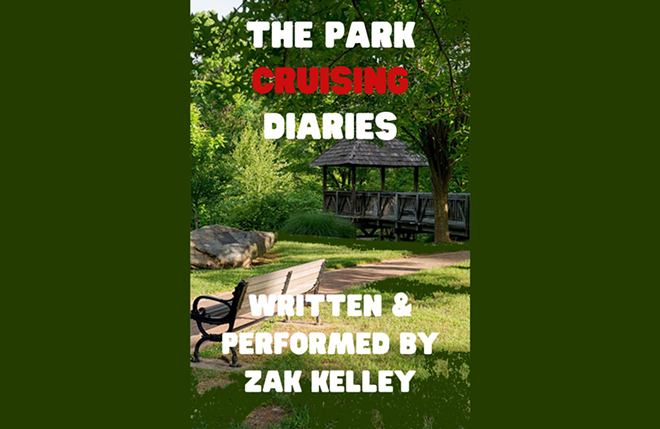 Zak Kelley’s solo monologue The Park Cruising Diaries is “Rated R” in the 2021 Cincy Fringe Guide, but that’s too tame. If you are at all squeamish about frank talk about sex — especially when it’s happening as anonymous “cruising” in Cincinnati parks — this is probably not the show for you.

That’s not to say that Kelley is not a humorous performer. His descriptions of his experiences during the COVID-19 pandemic have some odd and laughable moments, and he delivers them with energy, verve and quick musical interludes. (He told us he has a degree in theater.) But with a subhead of, "Let’s have a picnic and then some sketchy sex," some may feel out of place in this audience. I should add that his parents and other family members were in the audience on Sunday afternoon, evidently aware of, entertained by and accepting his possibly dangerous behavior.

Several of Kelley’s episodes had endings that felt rather flat and anti-climactic. Although he seemed well-rehearsed regarding his text, he constantly flipped pages on a three-ring binder. Was such a prop actually necessary?

Park Cruising Diaries might be well-received as a late-night comedy performance in a bar. But on a hot Sunday afternoon with the sun beating down mercilessly on a parking lot stage during the Cincy Fringe, it struck me as a fish out of water.