Need a friend? "Rewind-A-Buddy" offers to make it easy: He (or is it “It”?) is a VHS videotape with a hyper host eager to be an “at-your-service” friend. 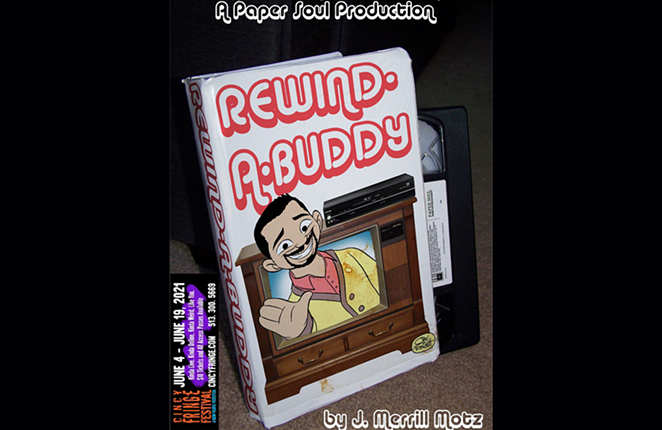 Need a friend? Rewind-A-Buddy offers to make it easy: He (or is it “It”?) is a VHS videotape with a hyper host eager to be an “at-your-service” friend. He dances onto the screen to an annoyingly repetitive tune, manically exclaiming, “I want to be your friend. I’m happy to be on your TV today.” His forced enthusiasm is oppressive, even as he forges ahead with his one-sided dialogue, pausing for the viewer to respond and answering so generically that he could actually be making a connection. He presses his face up close to the camera, as if he’s looking directly through the screen to the watcher, and tells his viewer, “You’ve got some great taste.”

“Buddy” is played with oppressive cheer by J. Merrill Motz. He shares photos and words of wisdom from his 2001 high school yearbook. He goes overboard in telling way too much about his rather sad and empty life. He catches himself occasionally and says, “It’s time to listen to you,” but before long he’s back to his own boringly mundane existence. He challenges the viewer to play Jenga with him, but its “Edge of Your Seat Fun” proves insufficient. Buddy constantly hearkens to an imagined mountain in the distance that “We’re climbing together.”

As Buddy continues his aggressive monologue, he becomes more and more frustrated and eventually angry that he’s failing: He rewinds the tape at least three times and starts over, with less and less success each time. Increasingly irritated, he finally fast-forwards to the end, admitting that he’s failed at being a friend. “I can’t see the mountain anymore,” he confides. The song over the credits is “A Friend is a Four-Letter Word.”

This live-streamed show uses a simple concept with a minimal set: Two shelf units stocked with rows of VHS tapes, a folding chair between, and a small table with a few props — an old push-button phone, his 2001 yearbook, a remote for the VHS player, and the Jenga game. The action is all Motz as Buddy, self-centered and zealous in his efforts to make a friend. There’s a modicum of inventive humor: His riffs on tropes in the yearbook, especially cliched photo poses, is amusing, and his dismay at the faux profundity of wisdom written by high school students resonates.

Nevertheless, the 45-minute performance feels like too much of the same thing. It gets interesting as his demeanor becomes more forced, but what’s the point? Rewind-A-Buddy wants to be an exploration of the challenges of true friendship, rooted in the need for two-way communication. The conclusion sadly suggests that this particular attempt ends in futility.