FRINGE 2021 REVIEW: They End Up Together

At the center of "They End Up Together" is a classic rom-com couple formula: Ray-of-sunshine Dolores meets cynical Robin. Not a spoiler: They totally catch feelings. 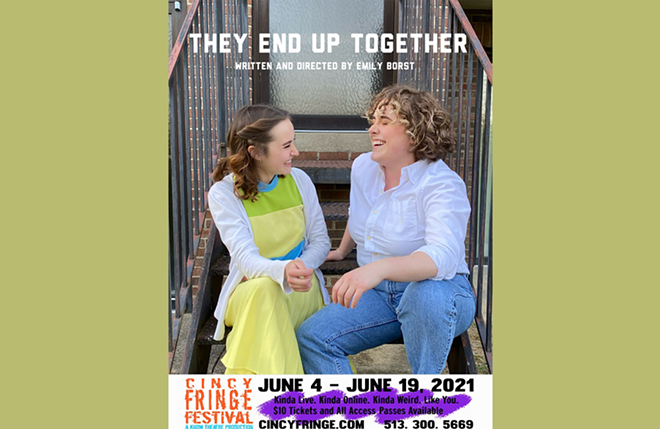 Photo: Provided by Cincy Fringe
Poster for "They End Up Together"

At the center of They End Up Together is a classic rom-com couple formula: Ray-of-sunshine Dolores meets cynical Robin. Not a spoiler: They totally catch feelings.

The set-up checks off another genre hallmark. Upon first meeting they bicker before the inevitable heads-over-heels fall. Swoon! It’s 1961. Dolores (Haley Beggs), dressed in a poufy yellow dress, is nervously standing outside a lesbian bar, contemplating going in and fretting over her appearance. Bartender Robin (Halee Hood), wearing a collared shirt and suspenders, steps outside for a smoke break and questions why Dolores is there. Queue the snarky back-and-forth dialogue.

In recent years, there has been a push for more LGBTQ representation in media that is not based purely on trauma. Queer joy, love and happy endings exist and should be celebrated. Written, directed and produced by Emily Borst, They End Up Together delivers that in a feel-good package. In Robin and Dolores, audiences are given a couple who does, in fact, end up together.

At an hour runtime, the pacing is smooth; the central couple’s affections are believable. Beggs and Hood bounce off one another with ease. Their chemistry is built through snappy, honest dialogue, not pining. Robin and Dolores are open and unashamed in their attraction to one another. In period pieces, such a storyline for a lesbian couple is rare. The couple moves forward without being forlorn about their plot in life as women who love women.

If given the chance to expand, They End Up Together would do well to flesh out its worldbuilding. Set in the early 1960s, there are details that could be folded in to bring the setting into sharper contrast. In an era of social unrest, there’s much that could be explored or nodded to. Still, the vintage-inspired costuming and other details — a raid on the bar gets and Dolores’s job as a Macy’s makeup counter clerk – give it a ’60s feel.

Every rom-com needs a “Will they or won’t they?” obstacle. The main one here is Robin’s ex, Jill (Rachel Kazee). When she turns up unexpectedly, old feelings come ashore, and tensions run high. This moment is used to deepen the show’s themes and questions about love, happiness and possibility. Again, if expanded, this conflict could be given a touch more agency.

Rounding out the cast is Melody Lindsey as Sam, Robin’s supportive roommate; Raven Hughley as Richard, Dolores’s brother; and Alexx Rouse as Dolores’s doting mother who wants nothing more than to throw dinner parties and for her daughter to be happy. On Borst’s team is stage manager Mackenzie Boyd and cinematographer Zach Robinson.

If you’re pining for a rom-com to escape into this Fringe season, They End Up Together is for you.