Viviane Amsalem (played by co-writer and co-director Ronit Elkabetz) wants a divorce from her husband Elisha (Simon Abkarian). Viviane is a quiet and unassuming woman, a mother of four children with an established career as a hairdresser outside the home 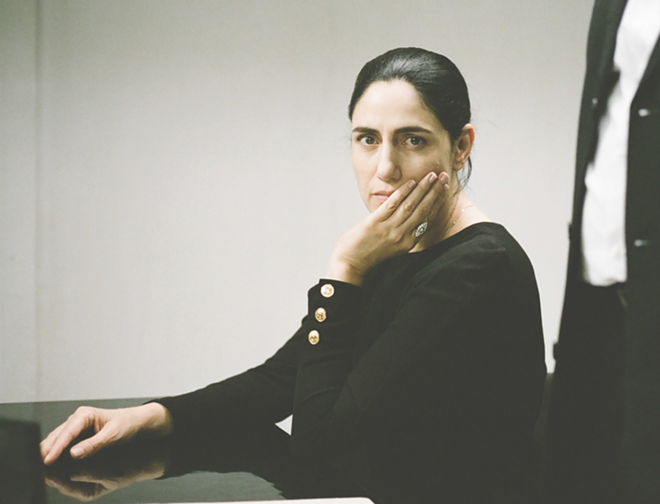 Viviane Amsalem (played by co-writer and co-director Ronit Elkabetz) wants a divorce from her husband Elisha (Simon Abkarian). Viviane is a quiet and unassuming woman, a mother of four children with an established career as a hairdresser outside the home. There is a deep-seated sadness in her face built upon a decades-long foundation of dissatisfaction with her life, specifically the choice foisted on her to marry Elisha, a devout man of faith. Impossible compromises have defined their relationship. Elisha has allowed Viviane to venture outside the house, to take their children in defiance of the rules of the Sabbath. Viviane, who entered the marriage from a religious family, broke away from the binding strictures of faith, in part with the tacit blessing of Elisha.

But Elisha stands unmoved in court, unwilling to grant Viviane the divorce she seeks. And in Israel, where there is no conception of either civil marriage or civil divorce, these two terribly unhappy people face a rabbinical court, the only authority that is able to deem marriages or divorces legitimate. Viviane places herself at the mercy of this court, this patriarchal system that refuses to see her as an equal member of society, a person worthy of consideration. And in this quest to secure her freedom, Viviane too will not be moved.

Gett: The Trial of Viviane Amsalem documents a horrific injustice, and it should be noted that I do not use the word “horrific” as a teasing ploy, to inject a degree of hyperbole or in any way to demean the power of the term. No, what happens to Viviane is truly horrific and at times frustratingly difficult to watch. Elkabetz and her filmmaking partner (and brother) Shlomi set the film entirely within the confines of the small courtroom where Viviane, Elisha and their legal proxies seek to make their cases.

As an American male, an African-American Catholic with liberal to progressive political leanings, it was challenging to stave off the rising sense of outrage at this archaic system. Viviane boldly and quite obscenely attacks it at one point for its obstinate blindness to her plight when, in theory, it should remember its pledged desire to defend the aggrieved and the oppressed. Viviane compares the Israeli court to the American judicial system, which would not coddle Elisha when he repeatedly refuses to appear during scheduled sessions.

Prior to sitting down to the screening of the film, I had films like A Separation and The Past in mind as potential reference points. Each of those titles captures intimate struggles between couples seeking to dissolve marriages and move on, and both films spotlight processes that place a greater burden on the women. The burden is a curious one because it is not one of mere proof; we’re not talking about a question of innocence or guilt (or assumptions one way or the other). The wives in those films, much like Viviane, stand on the other side of a high and great wall, insurmountable, outside the inner sanctums of power and influence, the network of old men with their hands on the reins.

Somewhere, somehow during the screening, though, those films faded into the background, replaced with a far more disturbing comparison. By the end, I couldn’t escape the feeling that Gett had left me as unsettled as I had been following the screening of Gaspar Noé’s Irreversible back in 2002. Noé used filmmaking techniques to trap audiences in extreme situations, forcing us to bear witness to what can only be described as horrific acts (the bludgeoning of a man’s skull with a fire extinguisher, the rape of a woman in an abandoned subway station) and it is to the credit of the Elkabetz siblings that their narrative decision to restrict the action to the court more than approximates the torture chamber vibe in Irreversible.

While watching Gett, we are on hand to bear witness to an ongoing spiritual and personal violation, one that intriguingly, even at its worst, never completely transforms Elisha into a monster. He is simply another participant in the process. Elisha did not create the system that violates Viviane and renders her invisible. He accepts the privilege granted to him though, and exploits it to the very end.

But what leaves the longest impact on our sensibilities is the grim reality that what happens to Viviane and women — in certain parts of the world, everyday — is irreversible because it is about the darkness in the human heart that will never see the light of day or truth. (Opens Friday at Mariemont Theatre) (Not rated) Grade: A