Cincinnati might seem like an unusual choice for the American Atheists organization’s annual national convention — a great many people here just presume everyone believes in a higher being, usually a Christian one, as part of their family-inherited “American values.”

“We look for places that are exciting fun cities that do have diverse populations and a lot of atheists, but where that atheist perspective and those atheist voices just aren’t being respected and aren’t being heard,” says Nick Fish, the organization’s president. “We don’t want to play into that false notion that atheists are in New York City and Los Angeles and nowhere else. Atheists are in every single community in the country and that’s why we go to the places we go to — to show that.” 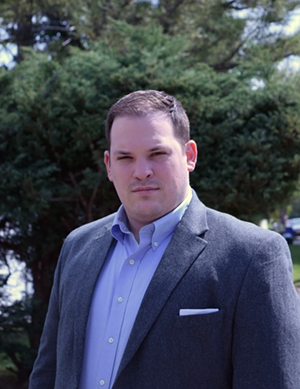 “We have a list of cities where it’s just sort of assumed the majority of people are religious,” Whissel explains. “Not to say we wouldn’t have a convention in Las Vegas, but when we go to places like where we’ve been, we’re front page news. And what happens is that all the closeted atheists in that town have learned there’s another atheist in their world. So one of the best parts of the convention is having local attendees come. It’s so gratifying to see this whole new world has opened for them.”

Actually, Greater Cincinnati has an active atheist community. Whissel, who now lives in New Jersey, was part of it when she lived in Bellevue, Kentucky. After losing faith in the Catholicism she was raised in, she was inspired to work for the late Edwin Kagin, a Union, Kentucky-based attorney who was the national legal director of American Atheists from 2006-2014. She also joined the local Free Inquiry Group and was a founding member of Tri-State Freethinkers, whose co-founders are Jim and Chrissy Helton of Union. (Jim Helton is American Atheists’ national field organizer.)

“My decision to speak at the American Atheists conference was not based on my religious beliefs or lack thereof,” Obergefell told CityBeat via email. “I’m a firm believer in the separation of church and state, especially because religion is often used to demean, attack and legislate against those who are different. Efforts continue across the nation to legalize discrimination under the guise of ‘deeply held religious beliefs.’ Yet these proposed policies and laws seem to have one target only, the LGBTQ community. I will speak out and work against these efforts in any way possible, so it was an easy decision to accept their invitation to speak at the conference.”

American Atheists was founded in the early ’60s by the late Madalyn Murray O’Hair, whose lawsuit challenging official bible-reading in public schools led to a landmark U.S. Supreme Court decision affirming a constitutionally protected separation of church and state. Today the group has 26,000 individuals who support it through membership, donations and/or participating in legislative action alerts, Whissel says.

American Atheists offered CityBeat two references to the growth of the non-religious in America. In a recent article, the Religion News Service reported “survey data suggests that the percentage of Americans who don’t affiliate with any specific religious tradition is now roughly the same as those who identify as evangelical or Catholic.” And a survey conducted by the Barna Group, which conducts research on faith and urban issues, found that twice as many Generation Z (born since 1999) teens consider themselves atheist as do the adult population.

“Teens, along with young adults, are more likely than older Americans to say the problem of evil and suffering is a deal breaker for them,” Barna’s website reports. “It appears that today’s youth, like so many throughout history, struggle to find a compelling argument for the existence of both evil and a good and loving God.”

But on a more immediate level, American Atheists is involved in trying to keep legislative bodies from passing laws or undertaking other activities that impose religious values on secular life or in any way grant religious privileges, thus breaching church-state separation.

The greatest current threat, Fish says, comes from so-called “religious exemption” laws, inspired by the Hobby Lobby decision in which, according to The New York Times, “corporations with religious owners cannot be required to pay for insurance coverage of contraception.”

American Atheists describes the convention as “three days of speakers, social events, comedy, music, workshops, and community events.” The regular price to attend is $249, but local residents can get in for $99 and the fee for full-time students is $49.

There are a couple of specially ticketed events, including a 9 p.m. Friday performance by God Awful Movies, a Mystery Science Theater-like trio that makes acerbic comments while screening religious movies. As the convention webpage puts it, “If a higher power really existed, its PR team couldn’t possibly be this bad!”

By the way, it’s no coincidence the American Atheists national convention occurs during Easter weekend.

“It’s sort of a combined thing of ‘What else do atheists have to do on Easter Weekend?’ and, quite frankly, rates for convention hotels are very cheap because no one else is scheduling anything,” Fish says.

For more on the American Atheists 2019 National Convention, visit aacon2019.org.