Going ‘Full Monty’ at The Carnegie

The comedy tells the story of six out-of-work steelworkers who, with serious financial obligations and no prospects, pick up stripping in pursuit of some fast cash. 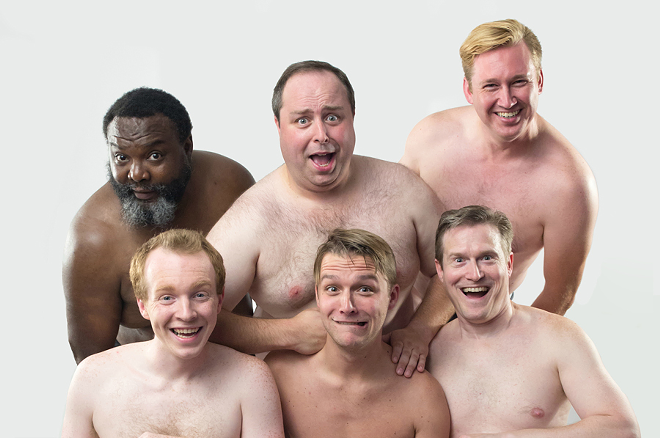 Photo: Provided
The game cast of the stripped-down musical comedy

Back in 1997, The Full Monty, a British film about unemployed steelworkers in Sheffield, England, was a surprise success. A few years later, it became an Americanized musical and had a successful two-year run on Broadway from 2000 to 2002. The Carnegie in Covington has mounted the show as its late-summer musical. I attended opening night last Saturday in a full house at the Otto M. Budig Theatre, where the audience had a good time watching a bunch of down-and-out guys with good intentions but not much talent try to make a buck by going “the full monty” — stripping down to nothing at all.

This British slang term from the 1980s didn’t originally refer to stripping. Its broader meaning was something like going “the whole nine yards” or “the whole kit and caboodle.” The movie sharpened the phrase to its current usage. It’s a bit odd when applied to a story about Buffalo, N.Y., but it’s a concise way to sum up a show about good intentions.

Of course, those are the pavers on the road to hell. (One character’s wife says their plan is “funny, scary,” but definitely “not sexy.”) That’s more or less what happens to six out-of-work steelworkers with serious financial obligations and no prospects. Witnessing their wives’ reaction to a male stripper, they decide to follow suit and pick up some fast cash. They’re a mismatched bunch with virtually no experience as dancers (one guy has taken ballroom dance lessons). Nevertheless, faced with self-consciousness and their wives’ doubts, they become a supportive ensemble. They become striptease act Hot Metal and pull it off. Literally. And, I should add, tactfully.

The Carnegie’s cast is full of good intentions, too. They’re talented singers and actors who convincingly play awkward, overweight, uncoordinated men. The actors surely experience some of the same challenges as the characters they play. Much of the show’s humor is rooted in discomfort, framed in unvarnished blue-collar attitudes. There’s a lot of crude language that’s probably typical for how these men talk and think.

I’m sorry to say that delicate ears might miss such material, however, because the Carnegie’s muddy sound system, pushed at high volume, constantly blurs the show’s lyrics (by composer David Yazbek). You certainly get the gist of what’s going on, but it doesn’t come easily.

That’s compounded by Matthew Wilson’s direction of Terrence McNally’s script, which doesn’t spend much time on the finer points of characters’ backstories. The Full Monty touches on some serious matters — unemployment, fathers’ rights, depression and suicide, impotence, homosexuality and body image — but these issues tend to bubble up momentarily and then evaporate as the story turns back to the comedy.

The central character, Jerry (Zachary Huffman), is separated from his wife Pam (Sara Kenny) and feeling guilty about not being a better dad to his adolescent son Nathan (Peanut Edmonson). Jerry’s friend Dave (Sean Mette) worries that his own marriage is at risk. Jerry hatches the ill-advised plan to strip and raise enough from the show to catch up on his child-support payments.

They recruit four more guys: Malcolm (Kelcey Steele), a depressed one-time security guard who lives with his domineering mother; Harold (Brian Anderson), an uptight former manager at the steel mill who fears his materialistic wife will see him as a loser; Horse (R. DeAndre Smith), an arthritic guy with startling dance moves who happens to be a “Big Black Man” that the others feel will be an attraction; and Ethan (Robert Breslin), a klutzy but enthusiastic fan of movie musicals whose singular “endowment” seems like a valuable asset. They’re joined by Jeanette (Sherry McCamley), a hard-bitten but encouraging showbiz veteran and piano player.

These capable local players can sing, dance (using Jay Goodlett’s seriously athletic choreography) and entertain. Their good intentions evoke a lot of laughter, but I never felt the underlying pain that should make The Full Monty an evening of poignant theater. Maybe titillating, off-color humor is enough for summer entertainment. But I’d hoped for more.

THE FULL MONTY is playing Friday and Saturday evenings and Sunday matinees through Aug. 27 at The Carnegie, 1028 Scott Blvd., Covington. Tickets/more info: thecarnegie.com.