The 35-city tour will flip, twist and leap through Columbus, Cleveland, Indianapolis and Louisville in October. But Cincinnati is conspicuously missing from the schedule. 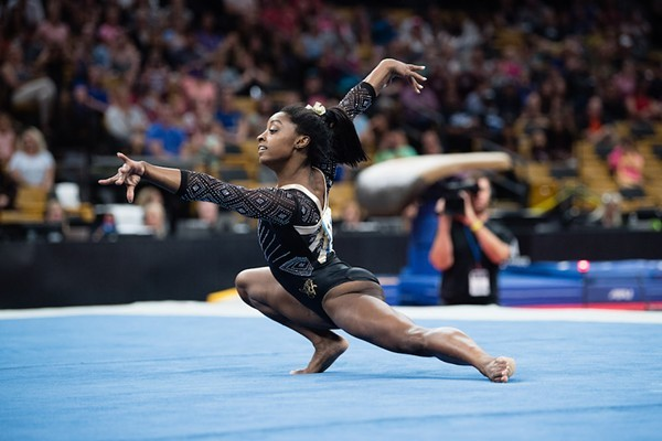 If you're already jonesing for a taste of Olympic mastery, there's another helping just around the corner, and G.O.A.T. is on the menu.

That is, if you're in one of the nearby cities not named Cincinnati.

“The Athleta Presents Gold Over America Tour will match athleticism and entertainment,” Biles said in a statement. “The show embodies the themes of empowerment and togetherness which was on display in Tokyo. Together, all the gymnasts on this tour want to inspire the next generation of women and athletes.”

The 35-city tour kicks off Sept. 21 in Tucson and will flip, twist and leap through Columbus, Cleveland, Indianapolis and Louisville in October. But Cincinnati is conspicuously missing from the Midwestern and Mid-Atlantic portion of the near-daily tour schedule.

The spectacle, which is described as "a high-energy gymnastics-meets-pop concert spectacular" will feature performers' famous routines as well as career highlights and personal videos. The performance will also give fans an opportunity to dance in the show's finale alongside all the gymnasts.

Per the press release, the Gold Over America show emerges from the gymnasts' "personal values of empowerment, friendship, positive body image, mental health awareness, and self-confidence."

Four-time gold medal champion and the most decorated U.S. athlete of all time, Biles, shocked the world when she withdrew from the individual all-around competition finals during this year's Tokyo Olympics in an effort to prioritize her mental health, which helped open up an international conversation about mental health among athletes, performers and youth. Advocating for mental health is what inspired the Gold Over America lineup, tour and mission.

"I have to put my pride aside," Biles said after pulling out. "I have to do what's right for me and focus on my mental health and not jeopardize my health and well-being. That's why I decided to take a step back."

Make road-trip plans on the Gold Over America website. Below, watch Biles' floor routine from this summer's U.S. gymnastics trials.

A version of this story was originally published by CityBeat sister newspaper Detroit Metro Times.