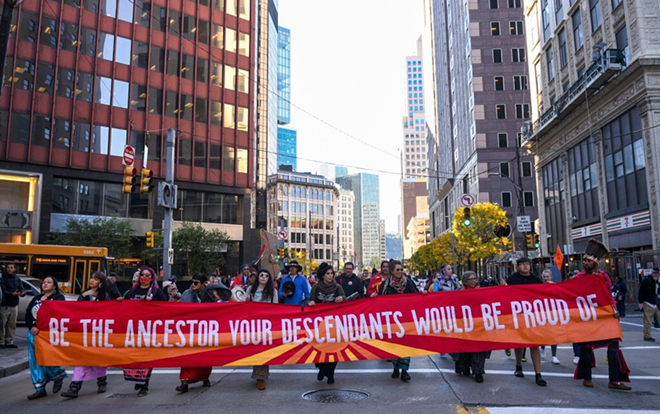 The second annual convergence hosted by GCNAC will be streaming online from 4-8 p.m. on Oct. 9 and 10. The event features eight Indigenous artists and activists, per a release from GCNAC.

Some of the featured guests include actress and GCNAC board member Irene Bedard, of the Native Village of Koyuk, as well as First Nations member Gary Farmer, an actor and musician who can be seen on the the FX series Reservation Dogs.

The GCNAC says the focus of this year’s convergence is International Indigenous Solidarity. They say topics will include “Indigenous sovereignty, land and water rights, Indigenous centered art and education and the relationship to resistance movements.”

"Prior to first contact, what is now Ohio was made up of many Native American and Indigenous nations. There are over 50 tribes who called Ohio home, including the Shawnee and Myaamia. Unfortunately, those tribes are no longer here due to forced removal and broken treaties. We are working toward creating an Indigenous Peoples' Day that we can celebrate worldwide and reunite the native community with the rest of the communities in Cincinnati," Executive Director of GCNAC Jheri Neri said in a release.

Partnered with Wave Pool Gallery and the 21c Museum Hotel, the Coalition says they will be also hosting an Indigenous-led, all-Indigenous art exhibition as part of the convergence.

The exhibition will take place Oct. 8-11 and will feature “15 Indigenous and Native American artists from across Turtle Island.”

The opening reception lasts from 6-8 p.m. Oct. 8 and anyone can view the displays during regular gallery hours at 21c on Saturday and Sunday. GCNAC board member Sarah Hernandez tells CityBeat that 12 of the 15 artists will be in attendance opening night.

A potluck dinner will be held at Jacob Hoffner Park in Northside 6-9 p.m. Oct. 11 in celebration of Indigenous Peoples' Day. Hernandez says plates and utensils will be provided, but guests are welcome to bring their own. The dinner and celebration are open to the public.

For tickets and more about the Indigenous Peoples' Day Convergence visit gcnativeamericancoalition.com.