Yes, Virginia, there will be local holiday theater this season

’Tis the season when Cincinnati theaters usually present their holiday shows. This summer, plans were announced to stage a one-man performance of A Christmas Carol at the Playhouse in the Park, and Cincinnati Shakespeare Company was expected to mount a safely-presented production of the zany send-up Every Christmas Story Ever Told (and Then Some!). Alas, the coronavirus Grinch spoiled those annual winter favorites — one more disappointment to a very sad year. Recently, Broadway tours of Frozen and Hamilton, promised for early 2021 at the Aronoff Center, were also postponed.

While the coronavirus casts its shadow over “the most wonderful time of the year,” local theaters have cobbled together a few holiday offerings.

The Playhouse will present The 12 Dames of Christmas at 8 p.m. Dec. 18, Dec. 19 and Dec. 20. The live show (with no intermission) features musical theater award-winner Angela Ingersoll impersonating a dozen musical divas. She’s won accolades for her spot-on portrayal of Judy Garland, and she’ll range through the likes of Julie Andrews, Janis Joplin and others. The Marx Theatre will sell 30% of its seating to allow for proper social distancing. Face masks will be required. Call 513-421-3888 for ticket availability; tickets start at $39.

Unwilling to venture into a theater with strangers? Other entertainment can be enjoyed from home. Actor Bruce Cromer, whose beloved embodiment of Ebenezer Scrooge has anchored A Christmas Carol at the Cincinnati Playhouse for more than a decade, recently recorded a one-man rendition of Charles Dickens’ classic holiday story about a miser who is taught the true meaning of Christmas by ghostly visitations. With recording and sound effect assistance from Matthew M. Nielson — the sound designer of many Playhouse Mainstage shows — Cromer used a 60-minute adaptation of the script that Dickens created for his own speaking engagements in the 19th century.

Blake Robison, the Playhouse’s artistic director, said, “Until it is safe to bring back the full ensemble for the Playhouse’s annual production, we invite the community to celebrate the spirit of the holidays from the comfort of home with A Christmas Carol on the radio. Bruce Comer is beloved as Scrooge, and now we’ll get to experience his immense talent and this holiday favorite in an imaginative new way.” Children’s Theatre of Cincinnati, recognizing that young audiences are especially starved for live entertainment, put together a holiday production of The Velveteen Rabbit, Margery Williams’ classic tale of a stuffed toy rabbit made real by a child’s enduring love. It’s being performed live through Dec. 13 using 44 of the seats in the theater’s 152-seat Showtime Stage (at 4015 Red Bank Road, Madisonville). Actors are masked and pantomiming to pre-recorded sound, reducing possible viral spread; the theater will be deep-cleaned between performances. The production has also been captured on video and can be ordered for at-home viewing via thechildrenstheatre.com. Theater tickets cost $25-$30 and streaming costs $15 (plus a service charge).

“Our mission (to educate, entertain and engage audiences of all ages through professional theatrical productions and arts education programming) has helped us last for 100-plus years through many challenges, but we have prevailed,” says Roderick Justice, Children’s Theatre’s producing artistic director. “Our young audiences need us now more than ever. They need the arts and storytelling.”

To that end, the theater has also adapted its visually and technologically imaginative touring production of Scrooge’s story, Bah, Humbug! A One-Man Christmas Carol, for video streaming. Actor Chris Carter has done the role on tour, and Justice says he offers a lively retelling with lots of humor that kids will enjoy. Less than an hour, it is also available for purchase ($15) throughout December. 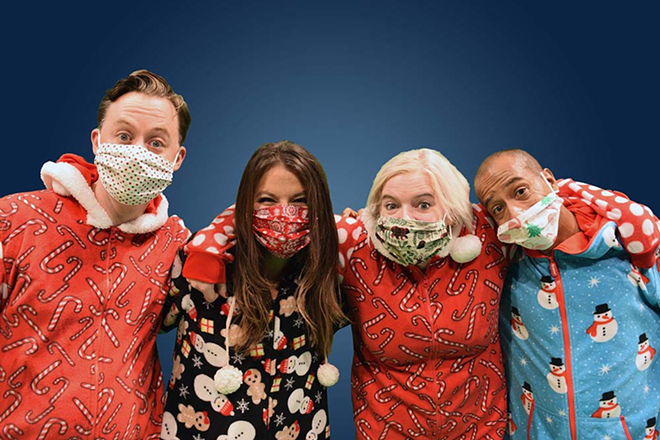 While Cincinnati Shakespeare Company can’t present its annual holiday satire, the creative team of Miranda McGee, Justin McCombs, Geoffrey Warren Barnes II and Maggie Lou Rader has reassembled for a pre-recorded video offering, The Drunk Santa X-mas Spectacular. This production is definitely not suitable for true Santa believers, since Drunk Santa’s sack is full of irreverent holiday hijinks with special guests, musical numbers and more. Streaming admission via cincyshakes.com is $20 per person (“honor system”) or you can view it on the big screen at the Esquire and Mariemont cinemas for the same price. A DVD is also available for purchase ($50).

Covington’s Carnegie Theatre has two holiday offerings that can be attended safely in the Otto M. Budig Theatre: On Friday, Dec. 18, DeAndré Smith will perform an evening of seasonal music ($25). On Sunday, Dec. 20, an audience can enjoy a screening of the classic movie musical, Singin’ in the Rain (free but RSVP required). Tickets are available at thecarnegie.com.

While it’s not quite theater fare, The Nutcracker is truly a beloved holiday classic. For 2020, the Cincinnati Ballet is offering its annual production as a re-envisioned virtual show titled “The Nutcracker at Home.” The free digital experience will include a one-hour version of the ballet recorded at Music Hall — with dancers following all COVID protocols.

“All those magical moments we share together each year remain in this production,” Artistic Director Victoria said in a release. “Clara and the Nutcracker Prince, the Sugar Plum Fairy and her Cavalier, plus we’ve added a few surprises for this digital version.”

Dates are TBA. Get more details — and a special Nutcracker-themed gift box — at cballet.org.

A long-held holiday performance event at Christ Church Cathedral, The Boar’s Head and Yule Log Festival, has been canceled for the first time in 81 years. The festival is rooted in the Middle Ages, performed with musicians and enacted by church members who play lords, ladies, knights, historical characters, cooks, hunters and pages. The performance is typically ticketed (and sold out); this year, anyone interested can watch online.

A video of the January 2020 pageant will be offered on Saturday, Jan. 2, and Sunday, Jan. 3, 2021. Check cincinnaticathedral.com later this month for details.

For those who prefer theater or storytelling without holiday trappings, numerous streaming offerings are available: