Both 'Girls' and 'Insecure' feature women creators/stars who play fictionalized versions of themselves and focus on a young woman's romantic life, relationship with her best friend and personal struggles. 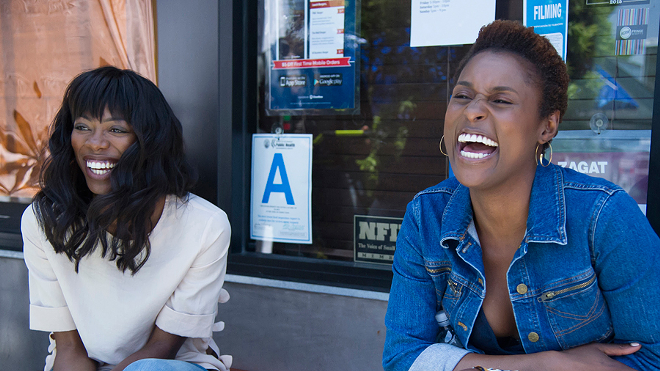 Photo: Anne Marie Fox/HBO
Issa Rae (right) with cast member Yvonne Orji
First, a disclaimer: It’s something of a sexist inclination to compare two very different series simply because they both deal with young contemporary women in gritty and humorous ways. There doesn’t need to be a competition or debate about which show and, thus, which woman creator comes out on top. There can and should be several options for television programs made by, for or about women.

But as HBO’s Girls looks ahead to its final season early next year, the network has launched another female-driven comedy that also focuses on a young woman’s romantic life, relationship with her best friend and personal struggles. Both shows feature women creators/stars who play fictionalized versions of themselves.

So, yeah, it’s difficult not to compare Insecure (10:30 p.m. Sundays, HBO) to Girls, especially because Issa Rae’s debut series represents so many solutions to Lena Dunham’s sometimes-problematic dark comedy, which has become something of a punching bag over the years for its insufferable characters that ooze with white privilege.

Both shows capitalize on the overused but ever-relatable idea of being “awkward.” For Rae, creator of the Awkward Black Girl web series that inspired Insecure, the term pertained to her own identity as a woman of color who didn’t always fit into the stereotypes others tried to box her into.

In Insecure, we see her character Issa turning 29, stuck in an underwhelming romantic relationship. She works for a community outreach program called “We Got Y’all,” where she is very much the token black girl, despite never quite fitting in the role her co-workers expect of her. She pretends not to know what “on fleek” means when her white colleague inquires.

We get a peek into Issa’s mind through her personal moments at the bathroom mirror or in her car, where she replays conversations from the day, freestyle raps and fantasizes about a man from her past.

Insecure offers a much needed black girl-next-door perspective. Issa faces challenges as a person of color and as a woman, but also just as a human — together, something all audiences can relate to and understand. The show is not the definitive comedic representation of the black woman’s struggle, because there’s no such thing — it’s the definitive representation of Rae’s experiences and regularly offers humor and insight.

In this week’s episode, a “guilty as fuck” Issa tries to hold it down as her boyfriend Lawrence moves to take their relationship to another level. Meanwhile, Issa’s BFF Molly explores her new relationship with Jared, who drops a truth bomb about his past.

Saturday Night Live (11:30 p.m. Saturday, NBC) – In what is the closest we’ll come to a new episode of Chappelle’s Show, comic Dave Chappelle hosts with a performance by musical guests A Tribe Called Quest.

The Walking Dead (9 p.m. Sunday, AMC) – We finally rejoin the group in Alexandria in this supersized episode as Rick tries to relay the seriousness of their new situation and Negan comes a-knockin’ for the group’s first offering of supplies.

The Mindy Project (Tuesday, Hulu) – In this special 100th episode, Jeremy gets a blast from his past via an old college buddy who is now a famous actor. Tamra pesters Jody about his love life and Mindy sees a Broadway show.

This Is Us (9 p.m. Tuesday, NBC) – William tells Beth a surprising secret; Toby breaks his diet; Jack and Rebecca note a growing distance between them.

Sweet/Vicious (Series Premiere, 10 p.m. Tuesday, MTV) – College students-turned-vigilantes exact their revenge on sexual-assault assailants. This is what the “meninists” feared and it’s awesome.