Hemptations Founder E.R. Beach Has Been Promoting the Benefits of Hemp for Nearly a Quarter of a Century

Beach's four Southwestern Ohio shops sell a variety of items, including what he says is the largest selection of industrial hemp products on the planet 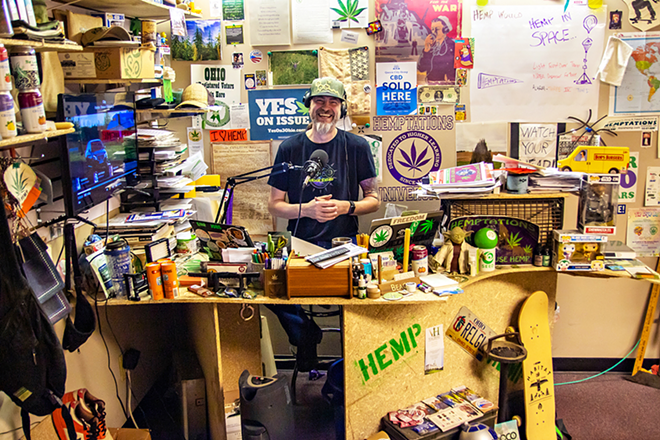 E.R. Beach wears head-to-toe hemp every single day, from his hat to his jeans to his red, green and yellow-striped Adidas. And it doesn’t stop there. The coffee cup he’s drinking from? That’s made from hemp. His desk? That too. The chair he’s sitting on? Hemp again.

To graduate from Heidelberg University in Tiffin, Ohio, then known as Heidelberg College, he gave his final speech for his communications degree on industrial hemp — the kind of cannabis that’s made his wardrobe (and more) possible.

“Not medical, not recreational, but industrial hemp,” he says. “Little did I know at that time the life adventure that would set me on.”

When he was approached with the idea of opening a store, he immediately knew what he wanted to sell. The idea for the name came shortly after and in 1995 Hemptations was open for business.

If you don’t already know, hemp is a non-psychoactive strain of cannabis that’s required to have no more than .3 percent of THC — aka the stuff that gets you high. There are biological differences between industrial hemp and the plants that are grown for marijuana. From fabric, paper, plastics and food to biofuel and even concrete, the plant has been hailed as a sustainable, eco-friendly alternative to virtually everything. It’s been estimated that there are as many as 50,000 by-products of hemp and, according to Beach, Hemptations carries the largest selection of industrial hemp items on the planet.

Hemptations sells books with titles like Hemp Macramé, Cooking with Cannabis and Healing with Hemp CBD Oil. Apricot jam and vegan parmesan made with nutty hemp seeds are sold right next to beaded hemp jewelry, hemp jeans, shirts, socks and pet supplies. Hemptations stocks plenty of personal care products too, like soaps, shampoos, lotions and lip balms, all made with moisturizing hemp oil. If it’s made from hemp, you can probably find it here.

The shelves behind the registers hold their fair share of rolling papers and lighters, and behind a beaded curtain in the back there’s a selection of some special glass and wooden objects for you-know-what that you need an ID and employee supervision to peruse. If recreational cannabis was legal in Ohio, one can guess they’d probably sell that too, but you won’t find your high in any of Hemptations' products just yet.

"A really good friend of mine finally said to me one day, like, ‘Beach, man, I know this is gonna sound really stupid, but can I smoke your jeans?’ And that was kind of a common misperception of it when we opened. My response to that was ‘Well you can smoke anything with a big enough lighter,’ ” Beach says with a laugh, “but you’re not gonna get high.”

When the first Hemptations store, now one of three locations in Cincinnati (and one in Dayton), opened in O’Bryonville, some in the community weren’t so sure about the new addition to the neighborhood. Beach remembers one member of O’Bryonville’s business association — of which he later served as both treasurer and vice president — commenting that he never came to meetings because he was “stoned all the time.” In reality, he was busy raising his young child and working as the store’s sole employee.

“I think it’s still the same misconceptions somewhat that we get to this day,” he says. “I remember this little old lady walking by — I’ll never forget her — she comes by and she says, ‘Hemptations? Sounds like pot.’ That always rang through my ears. But again, that’s why we opened — for the people to walk in the door and be like ‘OK, this is not what we think it is.’ ”

Hemp farming was banned in 1937 with the passing of the Marihuana Tax Act, so when Hemptations first opened, everything from raw materials to finished goods were being imported to the United States from countries like Canada, France and China, where hemp production was legal. Beach first found hemp companies to stock his shelves from ads in magazines and in his copy of The Emperor Wears No Clothes by Jack Herer, a book about the many uses of cannabis that was first published in 1985.

The 2014 Agricultural Act defined industrial hemp as distinct from marijuana, and the 2018 Agriculture Improvement Act removed hemp from the controlled substances list. Now, Ohio is one of only nine states that doesn’t yet allow industrial hemp farming, but Beach says he’d like to grow some of his own crop once farming inevitably becomes legal here.

The legality of cannabis has recently changed in Ohio with the allowance for medical marijuana and confusion over new laws has affected some's perception of the store. Hemptations recently had advertising pulled from a local TV station, and a longtime wholesaler wanted to stop shipping product to Ohio for fear that hemp products were included in new regulations.

“This is not the first time that the public — or even law enforcement —believed that hemp is illegal,” Beach says. “And the CBD stuff is brand new. But guess what? We’ve been selling CBD for 10 years. Ten years, five years before this whole controversy of growing even existed in the United States, we were getting CBD that was coming through customs — once again, no questions of its legality.”

Over the years, Beach has spoken to thousands of people at various exhibitions and events about hemp, and he goes live on Facebook every Wednesday to talk about recent developments in the cannabis world and host a Q&A session. He hopes that everyone can love hemp as much as he does, and now that hemp and CBD products can be found everywhere from Whole Foods to Walmart to Amazon, he says it looks like we might get there sooner than we think.

“Hemp allowed me to have a business for myself, believe in it, be able to educate people and try to make a change in the world one person at a time,” Beach says. “I wholeheartedly believe that I haven’t changed anything. The world has changed in a way that I am happy to accept, but I don’t need any credit for it. I just want everything that can be replaced by hemp to be replaced by hemp. The planet would be so much cleaner. No one would be paying attention, no one would get any credit, no one would care. It would just be the way that it is.”