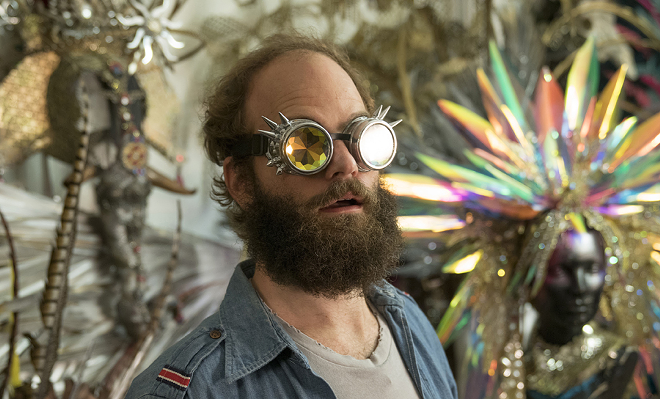 PHOTO: David Russell
Ben Sinclair is "the guy" who delivers the dope

On the surface, High Maintenance (11 p.m. Fridays, HBO) is a comedy that follows a friendly bike-riding pot dealer. But at its core, the show is truly a portrait of New York life — for people who happen to use marijuana (and even many who don’t).

The brainchild of Ben Sinclair (who stars as the unnamed, weed-delivery “guy”) and Katja Blichfeld, High Maintenance started as a Vimeo web series, with nearly 20 super-short episodes airing between 2012 and 2015. In its online iteration, and its first season on HBO in 2016, the show followed a predictable model: Each episode explored a different client that “The Guy” encounters.

But this current, second TV season has taken a distinct turn. It’s as if the lens is pulling back, allowing viewers to see more of what’s going on with the varied characters we meet, giving us some additional context. We’ll linger with some characters for a while before The Guy even shows up. And speaking of him, we’ve also been getting a glimpse into the life of our mysterious dealer, too.

Ironically, he plays a very small role in the season’s opener. “Globo” takes place in the immediate aftermath of some unknown catastrophic event. Could it be along the lines of 9/11? Maybe it would be more accurate to compare the feeling to 11/9, the day after the 2016 election? Whatever it is, this tragedy has cast a figurative cloud over the city, where we watch folks try to cope in various — and often hilarious — ways.

One man on a weight-loss journey struggles to craft an appropriate fitness-related social media post and serves as the sole attendee of a workout class. Meanwhile, a group of lovers remains disconnected from the hectic world around them, only to be blindsided by the news when The Guy delivers some smoke — and some much needed phone chargers. We see trauma through the eyes of countless characters from all walks of life in a way that’s ambiguous, yet poignantly so very New York City.

Another major issue in the Big Apple is housing, and in High Maintenance we see everything from swanky lofts and chic brownstones to tiny studios shared between a group of roomies. One episode, “Namaste,” opens with Danielle Brooks (Orange Is the New Black, Master of None) playing a woman buying weed from another Guy. She gets an unexpected text from “a client” and pulls herself together before running out the door. Pot-smoker cliches come to mind: the disorganized slacker stoner. And what type of “client” is she going to meet, anyway?

A potential home buyer, it turns out. The would-be burnout here is actually a hustling realtor with her own property-purchasing ambitions. It immediately bashes the lazy weed-smoker stereotype. But High Maintenance doesn’t preach about pot. It features productive people who indulge in an after-work toke the way many enjoy a glass of wine, as well as the goofy weirdos who are attached to their bongs.

In that same episode, we move on to a group of textbook Brooklyn hipsters who check several stereotypical boxes. A couple residing in a communal living-space hit the renter’s jackpot when they are selected by the affordable housing lottery and move to a luxe apartment in a classy neighborhood. But swanky subsidized housing isn’t totally what it’s cracked up to be when you’re excluded from many of the building’s amenities because of your status.

When they try to sneak into the off-limits sauna, they’re caught by security and a highly questionable bitch-fit ensues that leaves the renters reeking of entitlement. High Maintenance is kind to its characters, but it also presents them in a raw, honest way that does not always reflect well on them. It makes them feel all the more real.

And the shining star character of High Maintenance is Sinclair’s enigmatic ganja guy. You pick up details about his life here and there — last season we learned he is divorced — but really don’t get much of his story. One recent episode, “Scromple,” follows him closely after a bike-related injury lands him in the hospital; we meet his ex-wife, who, it turns out, he’s technically still married to. The imaginative ways this series explores the human experience are on full display here. It’s silly, emotional and thought-provoking all at once.

High Maintenance was just renewed for a third season, and I can’t wait to see how the show continues to evolve for many to come.