Set in Cincinnati in 1941 — as the world was hurtling toward war with Germany — "The West End" examines issues of immigration, discrimination and civil rights via its strong, opinionated characters.

For the first time in 18 months, the Cincinnati Playhouse in the Park has a live theater production onstage. In fact, it’s a world premiere: The West End, by Cincinnati born-and-bred playwright Keith Josef Adkins.

His play Safe House, debuted at the Playhouse in 2014. That story, rooted in a past experienced by his mother’s family in Kentucky, was set in 1843.

As its title suggests, his new play — commissioned by the Playhouse — is about life in a historic Cincinnati neighborhood: the West End. It is set in 1941 as the Great Migration of Black Americans from the rural South were moving north, with some people settling Cincinnati and populating an area west of Central Parkway, where Adkins’ extended family lived for several generations.

Grace (LaTonya Borsay) is a thoughtful, sometimes outspoken woman who owns a row house where she rents rooms to several boarders. Chloe (Shanelle Leonard) is a stylish young woman who’s an aspiring singer hoping to catch on with Count Basie’s band. Zieglar (Kevin Cristaldi) is a German descendent, a drinker and occasional handyman.

A regular guest is Peek (Brian D. Coats), a neighbor who is a deacon at the nearby Union Baptist Church. An admirer of the activist minister Rev. Wilber A. Page, Peek aspires to rouse the local population to demonstrate in opposition to Jim Crow Laws that have been relegating Blacks in the military to kitchen and janitorial jobs. Peek also aspires to win the affection of Grace, whom he calls “ornery.” She can have a sharp tongue when she grows impatient with his attentions. “Sometimes I bite before I should,” she says. 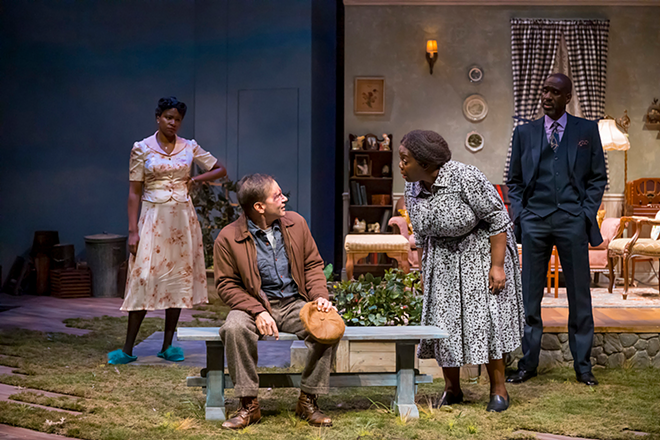 Grace occasionally alludes to a past she’d like to forget. Like Peek and many others, she’s migrated north from Georgia to Cincinnati and established a life that seems settled, although shards of that past still haunt her. She doesn’t sleep well, and one night she encounters a young man in her backyard, Heath, another Georgia migrant, who upsets her with reminders of her roots. He appears several times in the middle of the night — it’s possible that he’s a ghost or a figment of her imagination. He never interacts with other characters, and his nettlesome insights into Grace’s life and character reveal reasons why she is the way she is.

The year 1941 was a complicated time in Cincinnati and America. With the nation hurtling toward another war with Germany, Cincinnati’s German population was again the object of discrimination. At the same time, the influx of Blacks from the American South were met with resistance, too, and Peek warns Grace that housing Zieglar will result in problems. Peek has become passionate about early issues of civil rights protests and is working to recruit neighbors and church members to a march to Fountain Square to protest Jim Crow Laws. Such demonstrations happened in numerous American cities that year.

Adkins’ play is clearly set in the West End, with repeated references to Cincinnati details. Peek has food preferences (chili) and dislikes (sauerkraut) that reflect his politics. The German restaurant Mecklenburg Gardens is mentioned, as are the Regal Theater on Linn Street and the Cotton Club, a Jazz joint which flourished for several decades at Sixth and Mound streets. (Chloe yearns for an audition with Count Basie’s band there.) The Union Baptist Church, formed in 1831 and still a presence today, provides further historical context for the story. The Albee Theater, once adjacent to Fountain Square, is mentioned, as is Ezzard Charles on his way to boxing stardom.

The texture of mid-century Cincinnati is as tangible as the settings that Black playwright August Wilson used for his “Century Plays” set in Pittsburgh. The West End indeed resembles Wilson’s admirable body of work with strong, opinionated characters wrestling with contemporary issues. Borsay is especially powerful as Grace, a woman who knows her mind but can’t quite escape her past. Director Nicole A. Watson has put together an engaging production that’s a solid reminder of how much we have missed during 18 months of dark theaters.

The West End, presented by the Cincinnati Playhouse in the Park, continues through Nov. 7 on the Robert S. Marx mainstage. Patrons need to be masked and fully vaccinated against COVID-19 or show proof of a negative COVID test from the past 72 hours to attend this indoor performance.