Jennifer Archibald likes a challenge. A native of Toronto and graduate of The Ailey School in New York City, she’s Cincinnati Ballet’s newest — and first female — resident choreographer. She was appointed to that position in 2017.

Her works for the company have been praised since she first choreographed for the ballet during its 2014-15 season. And her latest contribution debuts as part of the Kaplan New Works Series, which opens this year’s ballet season with performances between Sept. 13 and 23. Cincinnati Ballet’s website says that, for her world-premiere piece, “Archibald will focus on the strength of the male dancer with a new ballet for five powerhouse men.”

Archibald’s all-male piece for New Works is called “Quem Vive Vera,” or “he who lives shall see” in Latin. It portrays five men struggling to map out their futures, and follows the same vein of contemplation and understanding that many of her previous pieces have.

“(It’s my) first time creating an all-male piece,” she says. “I wanted to do a 10-minute work and see if I could get these guys doing some really strong partnering. It’s going to be a challenge for me, but I want to be able to challenge myself, and bring Cincinnati new things to see. It’s not ‘just another Jennifer Archibald’.”

Not that there would be anything wrong with the latter. Archibald has built a reputation for herself as an exciting choreographer, blending Hip Hop and urban dance aesthetics with more classical pointe shoes to yield a wholly original experience. Her choreography has an angular quality, perhaps better described as fierceness. Or, better still, boldness, and it’s a through line in many of her pieces. Her choreographic process — both in the classroom and in the rehearsal studio — yields that result, but it doesn’t come easy.

“You’re going to be vulnerable, you might get upset, you might not be able to get the step immediately,” Archibald says. “We’re transmitting energy and we are going to work together to make sure this work is dope on stage. I know that my choreography only exists if my dancers are completely engaged.”

Cincinnati Ballet performed her last work for the company, “Myoho,” at the National Choreographic Festival in Salt Lake City this past May. Having debuted at the company’s Director’s Cut program this past April, “Myoho” is a vibrant, resonant ensemble work, with scenes of unapologetic female domination and an emotionally moving male pas de deux.

Archibald is happy about her unconventional and high-energy creative choices, and what it inspires in the dancers.

“When we went on tour to Ballet West, they shut shit down there,” she says. “They were onstage and people were like, ‘Oh, who are these kids?’ I was proud that they were mine. I’m definitely unorthodox in the ballet world where I’m like, ‘That’s that Hip Hop, we’re battling shit out, let’s shut shit down!’ I know I bring that energy to the room.”

Victoria Morgan, Cincinnati Ballet’s artistic director, is fully on board with Archibald’s style.

“In every case, for the women in (‘Myoho’), there was power, attack, sharpness and angle. And she saved the part of the ballet that really was the most vulnerable and tender for the men,” Morgan says. “I think we’ll see more and more of that as our art form starts to more accurately reflect our world.” 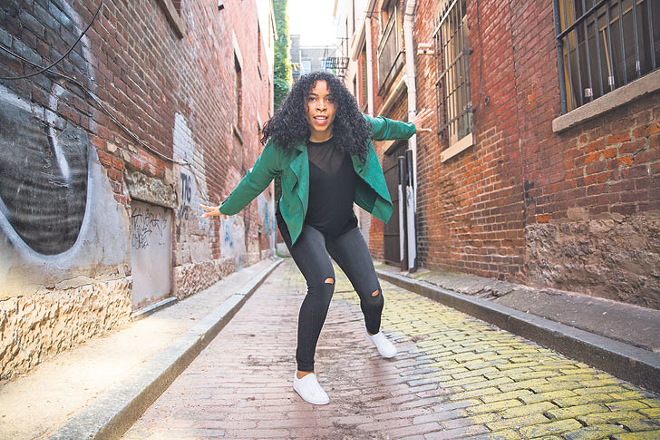 And while Archibald tends to flip the traditional gender roles of ballet on their respective heads, it’s not necessarily the driving force behind her work. She emphasizes her focus on substance and style. She’s also hesitant to attribute any specific qualities of her choreographic leadership to her own gender, saying that personality has a lot to do with the way choreographers work with dancers.

But Morgan sees her gender as an asset.

“I think it’s important that women see another woman at the front of the room,” Morgan says. “And a woman who is dynamic, commands attention and is someone who can push you to your limits and beyond. You realize, ‘Wait, hey, I’m inspired by a woman.’ In our art form, it doesn’t happen typically in that way.”

While your own preconceived notions of ballet might conjure up images of beautiful, lithe women in tutus, men are predominantly at the choreographic helm. Morgan has been combatting that stereotype, routinely giving women the stage to showcase their work (local choreographer Heather Britt is a noted example), even going so far as having an all-female-choreographed Director’s Cut program in 2017.

For the upcoming New Works, the five pieces on the mixed-repertoire program come from two women — Archibald and Mia Michaels, of So You Think You Can Dance fame — and three men — San Francisco Ballet’s Myles Thatcher and Cincinnati Ballet dancers David Morse and Taylor Carrasco.

Carrasco joined Cincinnati Ballet’s second company in the 2014-15 season and worked with Archibald then on a piece she created for those dancers to perform at the Cincinnati Zoo’s Zoofari fundraiser.

“She knows exactly what she wants and how to get it,” he says. “She moves quickly, and if you don’t at least show her that you’re trying to catch up, you’re going to be left behind. She likes people who are involved in the process but also very receptive to her process.”

There’s a sense of earthiness to Archibald’s work in Carrasco’s description, and it’s evident to anyone who’s ever seen her choreography.

“My work isn’t superficial,” Archibald says. “My work is about human behavior, and within those investigations there are lot of stories to be told. They are real, and those realities are where I begin my emotional attachment to the work before I enter the studio.”