The beloved longtime producer of plush mascots, theater wardrobes and, yes, the White House Easter Bunny costumes, has passed away 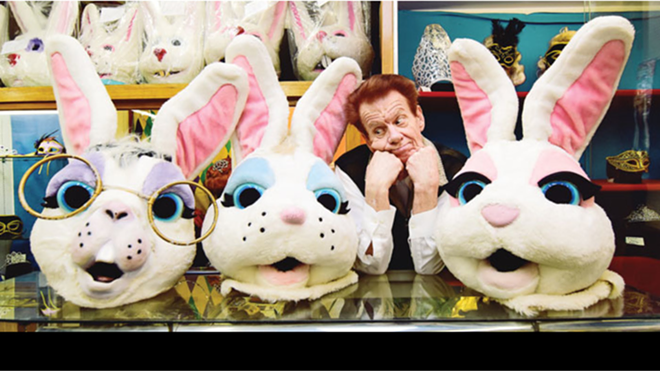 Jonn Schenz of Camp Washington's Schenz Theatrical Supply has passed away. Condolences and notices of his death started appearing on his personal Facebook page and Camp Washington's community page last night. No cause of death was given, although based on posts to his Facebook, he appears to have been ill.

This was posted to the Camp Washington in Cincinnati page:

"Everyone who wishes to send Condolances to Stephen Rausch (Jonn's Life Partner) can do so by mailing them to: Schenz Theatrical Supply 2955 Colerain Ave Cincinnati 45225

We will Make sure that Stephen gets all of them.

Myself and John Ray will also be planning a memorial event to remember our dear friend at. When we have the date and location set we will notify everyone here on FB. We hope everyone who jonn has touched in his life can attend. If anyone has any favorite pics of jonn we can include please send them to one of us in a PM."

You can see condolences and memories on his Facebook page at facebook.com/jonn.schenz. 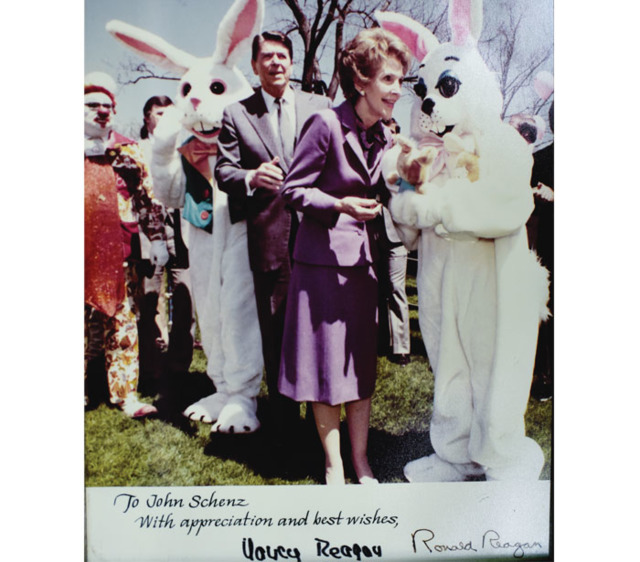 Photo: Provided
The Schenz Easter Bunnies with the Reagans

Schenz Theatrical Supply produced costumes, plush mascots and theater wardrobes for more than 40 years. But the most fascinating character by far was the man behind it all: Jonn Schenz.

Schenz has provided the White House with bunny costumes since 1981, and stories about this legacy pop up every year around Easter, as if that was his only thing. It was not.

“I’ve kind of done just a little bit of everything, from cowboy to ballet dancer,” Schenz told CityBeat in a 2016 interview. 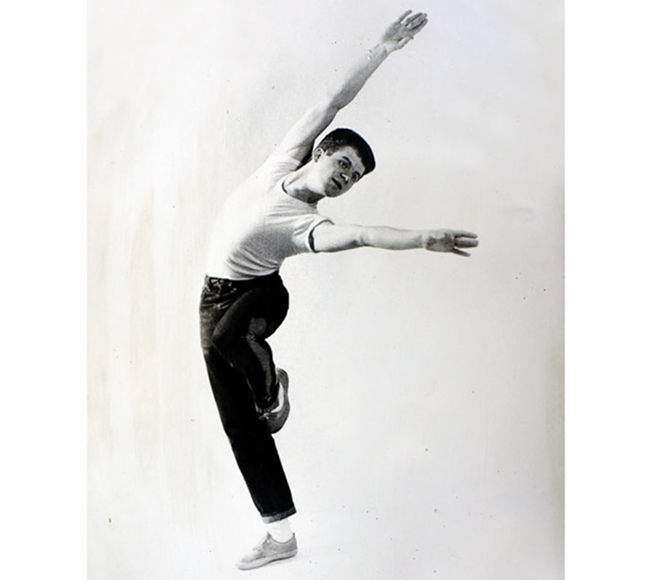 Photo: Provided
Schenz started his career as a dancer

Here's a long excerpt from that joyous interview, conducted by then Arts & Culture Editor Jac Kern, which you can read in full at citybeat.com:

Schenz was born in Columbus, Ohio some number of years ago — he insists that he is, in fact, 39 years old, though the math doesn’t quite add up. Growing up he moved around, living in Kansas City, Mo. and in New Mexico, where he spent a summer as a ranch hand.

Schenz returned to Columbus and looked to follow in his doctor father’s footsteps, studying pre-med at Ohio State University, but that didn’t work out. He moved to attend the University of Cincinnati, where he briefly studied business. It never suited him.

While at UC, his English professor, Herman Newman — husband of Cincinnati philanthropist Ruth Lyons, just one of many notable figures Schenz would cross paths with over the years — encouraged him to explore the arts.

“And I did, and I did,” Schenz says, letting out another hearty laugh that only comes from a combination of genuine joy and cigarettes.

He finally found his place in musical theater at the Cincinnati College-Conservatory of Music, which is now UC’s CCM. That summer he received a scholarship to Canada’s National Ballet School, where he was classically trained in dance.

Schenz’s performance experience ranges from the big top to the Big Apple. In 1963, he joined the traveling carnival group Olson Shows, dancing in burlesque shows at state fairs across the U.S. Schenz would do what he calls “partnering a stripper” — he’d perform choreography with a dancer, but get off stage before she’d start shimmying and shedding clothes.

And while the environment was full of strippers, freak shows, carnival games and rides, it was sometimes dangerous business. At one stop, Schenz says a biker gang threatened to cut down their tent, potentially crushing anyone left inside. The show also arrived in Birmingham, Ala. right after the 16th Street Baptist Church bombing in 1963.

“Everybody on that lot was scared to death, ’cause we didn’t know what the hell was gonna happen,” he says.

Overall, though, the show was a positive experience for Schenz, who truly enjoys meeting new people.

“I went there coming from a doctor’s family, not having any concept of what carny people were like,” he says. “I kind of went there with all kinds of trepidations. Came out with all the respect in the world for the people.”

Schenz finds everyday folks just as interesting and important as the high-profile people he’s encountered over the decades. That’s saying something when you’ve met every president since Ronald Reagan, brushed shoulders with Cincinnati’s elite and performed with Ginger Rogers. Yes, Schenz spent a stint in New York dancing in productions with the likes of Rogers, Donald O’Connor and Betty White.

A number of factors contributed to Schenz returning to Cincinnati. He felt he was lacking a home base, having spent years scattered across North America; he also came down with hepatitis. Schenz realized he would never make it as a star dancer — he got his start far too late, since he had just begun studying dance in college.

“I would never go without work, but I would never be the top guy,” he says. And since those who can’t dance (on the level Schenz wanted, at least) teach, that’s what he did — across Cincinnati and with dance studios in Maysville and Falmouth, Ky. A friend suggested he get into the dance supply business, so he opened a shop at the corner of Gilbert and McMillan streets in Walnut Hills.

Schenz found it hard to compete with Loshin’s, a large dancewear company that existed in Cincinnati from 1946-2012. The shop was struggling, so after fielding calls for Halloween costumes, he bought a collection from a community theater to rent out. Costumes were officially added, and the shop became Schenz Theatrical Supply in 1967.

“I wanted my name up in lights,” he says, reflecting on his days as a performer. “Yeah, I had to pay for the sign, but I got my name up!”

Schenz found his niche matching customers with the perfect getup.

“When you walked into the shop, I knew exactly what costume you were gonna walk out in,” he says. “There was no question. You may have wanted to come in and be an angel, but I was gonna send you out as a hooker — I didn’t give a damn!

“I knew what I had that was gonna fit you and make you look good.”

Stephen Rausch, Schenz’s partner of 46 years, joined the company as a designer a couple years after Schenz opened shop in Walnut Hills.

While creating designs for Schenz, Rausch also went on to become head costume designer for Ringling Bros. and Barnum & Bailey Clown College in Venice, Fla., where he built and designed clown costumes. One of his mentors was head of wardrobe for the New York City Opera, J. Edgar Joseph. Schenz gushes over Rausch’s talent, calling him a genius and pointing out that he majored in an unrelated field, Spanish, in college. Rausch taught himself how to sew and make patterns, going on to design for ballets, theater shows and operas. More recently his specialty has become intricate fiber-sculpture art dolls, another self-taught craft.

The duo soon relocated downtown, moving to three different spaces on Fourth Street in the 1970s and 1980s. Over that time, Schenz expanded its stock and services. They bought Tu Tu Theatrical’s stock, which included items from the old George Beck Costume Co., with some costumes dating back to 1852.

“Stop and think about that,” Schenz says. “(The collection has) been through the Civil War, World War I, World War II, the Great Depression. We are the third caretakers. We do not have the right to lose it.” While the 19th-century apparel is obviously no longer in use, Schenz stresses the importance of the long heritage.

Schenz Theatrical added a new element to the business in 1975, when they started hand-making mascot costumes — think amusement park characters or, OK, furries — for schools, businesses and even Hollywood. MGM’s Pink Panther was one of the first. They continued to produce the character until around 2013, when manufacturing was outsourced overseas. At one time they were the sole supplier of Tom and Jerry characters, and they were even flown out to New York to celebrate the cartoon’s 50th birthday. Frisch’s Big Boy, Charlie the Tuna, Slush Puppie and a purple dinosaur that predates Barney all came from Schenz, plus other characters for Procter & Gamble, the Texas State Aquarium, the Cincinnati Pops and Hardee’s, to name a few. Companies from across the country and world have hired Schenz to make their mascots — at one point they were the top manufacturer in the country — and this reputation led to Schenz creating the Easter bunny costumes for the annual White House Easter celebrations.