And now, a dispatch from our sister paper, Creative Loafing, in Tampa Bay... 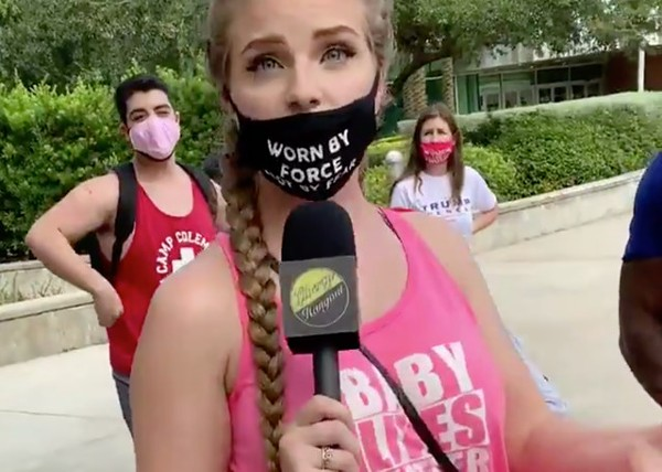 Photo: @shivorsomething
Kaitlin Marie Bennett in a pink tank top that says "Baby Lives Matter" and a mask that says "Worn by force not by fear."

Kaitlin Marie Bennett, also known as the “Kent State Gun Girl,” was met by protesters at the University of South Florida Wednesday afternoon.

In a video first posted to Twitter by @shivorsomething, Bennett made a surprise visit to the Tampa campus and was seen presumably filming for her conservative website Liberty Hangout.


Later that afternoon, tweets from the student newspaper The Oracle showed large crowds of protesters gathered around Bennett at MLK plaza, while she wore a pink “Baby Lives Matter” T-shirt and interviewed students about abortion. Other clips from the publication show students shouting “Black Lives Matter,” “I Can’t Breathe” and “This is where your tuition goes,” as USF police officers keep crowds back.

At one point, students could be heard chanting "Shit your pants," in reference to a rumor that Bennett once pooped herself at a frat party.

Kaitlin Marie Bennett, American gun rights activist known as ‘Gun Girl,’ appears to be interviewing students at the MLK Plaza. A large crowd of students is starting to form. pic.twitter.com/SvSGnRuH05

Adam Freeman, Director of Media Relations for USF, told CL that the school was informed this week that she may be visiting campus Wednesday.

“The campus is an open public forum,” said Freeman. “USF values the right to free speech, but what’s important to us here is that those who visit our campus follow requirements for COVID-19 and maintain social distancing.” Freeman says the school informed Bennett of the COVID-19 rules before she arrived.

In multiple videos posted to social media, Bennett appears to be incorrectly wearing a mask that says "Worn by force not by fear."

Last month, Bennett caused a significant uproar after she visited University of Central Florida and reportedly violated the school’s social distancing policies by not wearing a mask. The visit resulted in a protest from progressive groups, as well.

Bennett later claimed on Twitter that “left-wing terrorists” attacked her then called on Trump to “#DefundUCF & any other university that lets domestic terrorists shut down free speech.”

The school later clarified that Bennett was welcome to express her opinions on campus, but that she also needs to comply with UCF’s COVID-19 policy.

“The group on campus today was lawfully expressing their free expression rights but not complying with UCF’s COVID-19 policy, which requires everyone on campus to wear a face covering,” the university tweeted.

While Bennett's visit to USF on Wednesday attracted large crowds, the event wrapped up with little incident. USF Police confirmed that Bennett and her team of bodyguards left campus at around 4 p.m.

For the past few years Bennett has focused primarily on attempting to bait students at public universities into saying something provocative for her self-described “Libertarian media outlet,” and then, of course, selectively editing the clips. Unsurprisingly, she’s been able to make a career out of this, even when it goes terribly wrong.

You could not make this better if you tried https://t.co/sTyUBAmq7z