Kentucky Kingdom Amusement Park in Louisville Can Reopen June 29, If You're Up for a Drive

Ohio Gov. Mike DeWine has yet to give the go-ahead for amusement parks to reopen in Ohio 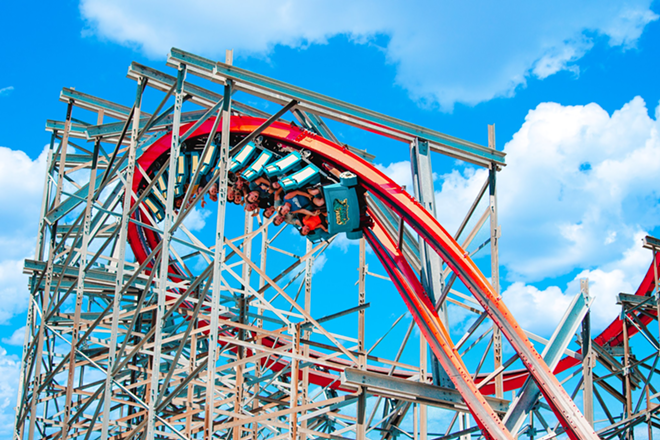 “Based on talks we’ve had over the last several days, we can announce that Kentucky Kingdom will be able to open the week of June 29,” said Beshear. “We appreciate the operators of the park for working on the reopening plan.”

So far, Ohio Gov. Mike DeWine has not released any guidance regarding the reopening of theme parks — including Kings Island or Coney Island — in the state. He says plans for that will be addressed next week.

Kentucky Kingdom — which, according to its website has "more than 70 rides and attractions, including six world-class roller coasters, a huge water park, children’s rides, games, shows, and so much more" — will be reopening on June 29 and its associated water park, Hurricane Bay, will be reopening shortly thereafter, says the park.

“Everyone has a role during these trying times. Kentucky Kingdom’s role is to provide opportunities for summer employment to many high school and college students. Equally important, our role is to bring smiles and safe family fun back into the community," said Ed Hart, the park's president and CEO, in a release."That’s what Kentucky Kingdom and Hurricane Bay is all about.”

The park has lowered their general admission price — and their out-of-state price — to $29.95. So if you really, really need to get on some kind of roller coaster other than the emotional one we've been on as a result of the coronavirus pandemic (and if DeWine doesn't announce any kind of reopening dates for amusement parks here), you can get in your car and drive yourself down to Louisville.

The park's website does not seem to list any kind of advanced COVID-19 safety protocols other than this from Hart in the press release: "The park will operate with enhanced sanitizing and cleaning procedures and safety protocols to provide the best possible protection of guests and team members during the current coronavirus crisis."

The Healthy at Work Kentucky site doesn't have any operating guidelines up yet either.

But one can assume/hope there will be some type of guidelines for guests before they go. For example, some Japanese amusement parks have told guests there is no screaming allowed on roller coasters. And Disney will be using a new reservation policy and eliminating events like the nightly illuminated parade.