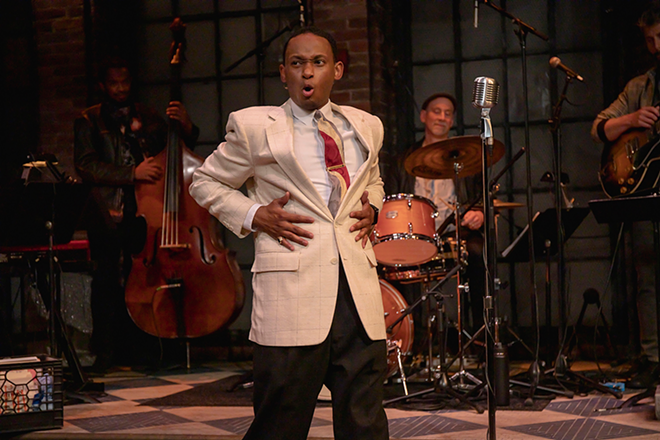 Born in 1937 in Arkansas, William Edward “Little Willie” John’s entire but brief recording career was with Cincinnati’s King Records. Sanchez also wrote and directed Cincinnati King in 2018 for the Playhouse, a show that had John among King Records' legendary recording artists such as James Brown and others.

The 90-minute production of Need Your Love (no intermission) covers the arc of John’s diverse, tragic career.

The show opens with Woodard as a nervous performer, set in the present and putting on an unauthorized show at 1540 Brewster Ave., the now-rundown building in Cincinnati’s Evanston neighborhood that was King Records’ home in the 1940s, ’50s and ’60s. His aim is to bring some current attention to the place where a lot of stars began their careers.

He’s there with an able backing quartet, featuring the show’s music director Richard Livingston Huntley on drums, Ralph Huntley on keyboard, Terrell Montgomery on bass and Joel Greenberg on guitar. To start, Woodard performs John’s best-known number, the sensual “Fever” — he was the first to sing it, before Peggy Lee’s recording made it a 1958 hit — complete with sharp finger snaps.

As Woodard mentions Little Willie John’s name several times, the lights flash, as if his ghostly presence is being conjured. Then an electrifying moment transforms Woodard into the historic singer. We follow John’s ambitious, frenetic career, punctuated by constant contract bickering with King Records’ founder and executive Syd Nathan. Actual recordings of Nathan’s officious, no-arguments-permitted statements he made to everyone about how music and recording should be done are incorporated into the production.

John was a chameleon performer, and Woodard excels at demonstrating the diversity of his talent. Following his boyhood in Detroit where he and his siblings sang in a Gospel choir, John got his start by turning up at King Records in Cincinnati and audaciously introducing himself to Nathan, who was in the middle of recording a performance by another singer, Titus Turner. John, a quick study, offered his own rendition of Turner’s “All Around the World” after hearing the number just once. Nathan and Turner were dazzled, and John was quickly signed to an exclusive contract.

His early recordings did well, and John toured throughout the U.S., even employing James Brown as his opening act on several occasions.

Woodard, like John, has the ability to convincingly perform a broad array of material from Blues to ballads, from jittery, staccato numbers to crooning and early Rock styling. John’s own composition, “Leave My Kitten Alone,” was a raucous tune that appealed to The Beatles (who recorded it in the mid-1960s but didn’t release it until 1995, long after John’s death).

John’s growing reputation led to a contract offer from Capitol Records, but his ongoing disagreements with Nathan prevented that from happening. His energetic performances were never affected.

Woodard has rooted his performances of the show’s songs in John’s own stylings, although the 13 musical numbers include several from the repertoires of other early performers.

John’s career, marked by a fierce temper and alcohol abuse (neither of which are significantly represented in this show), ended tragically in a 1964 barroom brawl at Seattle’s notorious Birdland, an after-hours joint.

He fought with a man nearly twice his size — John was a diminutive 5-foot-4-inches, not an obvious match for a 6-foot-2-inch fellow weighing more than 200 pounds. But when the dust settled, the large ex-con railroad worker John was fighting was dead from a stab wound.

John, who had previous run-ins with the law, was convicted of manslaughter and sentenced to prison in Walla Walla, Washington. His appeals failed, and he died of heart failure in prison four years later in 1968 at the age of 30, perhaps precipitated by a failure to give him access to his epilepsy medicine.

In the unfolding of John’s painful, declining years, Woodard gives his most affecting song performances: a furious rendition of “Why Don’t You Haul Off and Love Me,” originally a 1949 Country hit; his own composition, the yearning Blues number “Need Your Love So Bad;” and “Cottage for Sale,” a sad 1929 song about resignation and acceptance. The show’s finale uses the standard, “You Are My Sunshine,” the last song John recorded.

Woodard, who returns to the present from his journey into the singer’s story, wraps up the show with a rendition of that familiar, often saccharine number using Little Willie John’s surprising style and unexpected passion. It’s a startling and satisfying conclusion to this stirring portrait.

Need Your Love is an eminently entertaining performance with a sobering ending of a promising career cut short by the social disadvantages faced by Black performers in the mid-20th century (a footnote: Little Willie John was inducted into the Rock & Roll Hall of Fame in 1996, presented by Stevie Wonder).

As Little Willie John, actor Antonio Michael Woodard emphatically proclaims, “My lifetime love was music!” and that’s the final impression that Sanchez’s production leaves with audiences. It’s a Cincinnati-rooted tale that speaks to a much broader audience.

Need Your Love, presented by the Cincinnati Playhouse in the Park, continues through Dec. 12. For tickets and more info, visit cincyplay.com.