Adventure Port will be a "hub for explorers searching for the ruins of an ancient civilization."

After teasing a big announcement on its social media accounts yesterday, Kings Island has revealed something new coming to the park in 2023: Adventure Port.

This land, which will be located between Coney Mall and Action Zone, is described on the website as "resting in the foothills of overgrown mountains and dense tropical terrain" and as a "hub for explorers searching for the ruins of an ancient civilization, its forbidden temple and mysterious wonders."

The description also plays up "ancient spirits" and "age-old curses."

The sort of Indiana-Jones-in-Latin-America theme builds on the existing Adventure Express roller coaster — which will be getting an enhanced thematic design treatment — and will include two new rides, as well as a market, restaurant and quick-serve eatery. 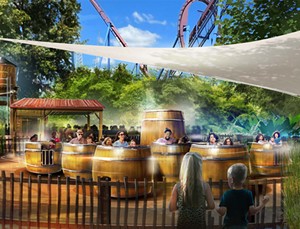 Photo: visitkingsisland.com
A rendering of the Cargo Loco ride
The rides will be family-friendly and include the possibly-culturally-insensitive, Spanish-English named "Sol Spin" and "Cargo Loco."

Sol Spin is a sort of Ferris wheel, designed to look like an "immense sun disk created by an ancient civilization," which will take riders 60 feet in the air at 25 miles per hour.

Cargo Loco is a spinning ride where guests will sit inside shipping barrels and rotate around.

The new attraction — which seems to take a cue from vintage theme park rides, like Disney's Jungle Cruise, and 1980s white man archeology adventure films — is slated to open in 2023.