The beginning of the year is typically slow for Cincinnati theater, but things will explode into new directions on Jan. 27. 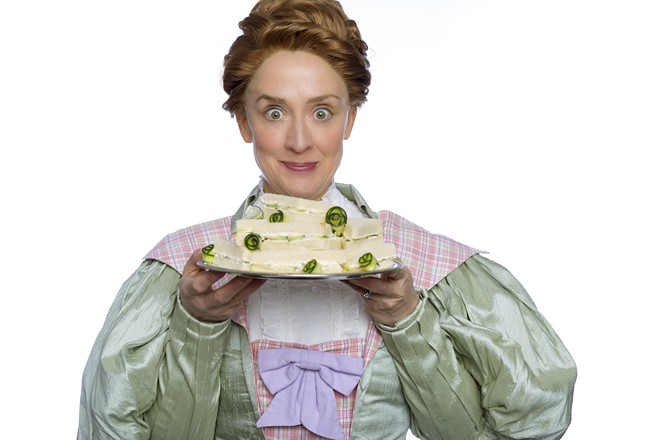 Photo: Mikki Schaffner Photography
Kelly Mengelkoch plays Gwendolyn in The Rewards of Being Frank, presented by the Cincinnati Shakespeare Company.

The beginning of the year is typically slow for Cincinnati theater, but things will explode on Jan. 27 when both Know Theatre and Cincinnati Shakespeare Company open productions that adhere to their ongoing missions while also suggesting fascinating new directions. These shows will be staged by directors with perspectives that underscore the broadening impact of Cincinnati theater.

Brant Russell, chair of the acting program at the University of Cincinnati’s College-Conservatory of Music, will stage Aisha Josiah’s Dickless, while Stephen Burdman, founder and artistic director of New York Classical Theatre, will steer Alice Scovell’s The Rewards of Being Frank for Cincy Shakes in its world premiere. Burdman then will move it to New York City for an off-Broadway run in March.

Both productions are local premieres of wildly different tales, and both are set in England. Josiah is a young British writer, producer and dramaturg, while Scovell is based in New York City but channels Oscar Wilde. Her play is a sequel to Wilde’s 1895 comedy, The Importance of Being Earnest.

During a phone conversation with CityBeat, Russell reveals that he was tempted and then recruited to direct Josiah’s recent script by Andrew Hungerford, Know’s artistic director. According to Russell, the two exchange plays they like – works Russell might use to train young actors at CCM or Hungerford could stage at Know’s adventurous venue in Over-the-Rhine.

Dickless is a dive into the seedy underbelly of a fictional small Northern England town, Dunningham. With interrelated monologues, several tales are told. Saff’s best friend is being slandered online by her ex. Oli is being blackmailed by a mysterious stalker who knows his most hidden secret. Smith Henry is broke and scrambling to pay off a debt. They’re all out for revenge, but they soon discover that vengeance is wilder, bloodier and more unpredictable than they imagined.

Local actor Tess Talbot plays Saff, the best friend of a woman whose reputation is threatened by an internet rumor. Shifting between two roles and their respective genders, Talbot also brings Oli to life, the boyfriend of someone else who’s now gunning for her own revenge. Jared Earland plays Smith Henry, a dim fellow caught up in a smear campaign. CCM acting student Sydni Charity Solomon is Titch, a little sister out for revenge of her own.

Russell says he was drawn to this show because it’s about how libidos and sexuality play into gender roles.

“This kind of material is not only suited to Know, but Know’s audiences are adventurous enough to want to hear about it,” he tells CityBeat, adding that it’s a vehicle “for three really good actors to do what they do best.”

Russell previously has staged productions for both Know and Cincy Shakes and says he’s eager for his students to interact with Cincinnati’s local theater companies (his post-apocalyptic tragicomedy Bankers will be presented by Know later this season).

“We have an incredible depth of acting talent in Cincinnati,” Russell observes. “My students are seeing opportunities and likeminded artists here. More and more are choosing to stay and make a life here.”

At Cincy Shakes, artistic director Brian Phillips is excited to produce the world premiere of The Rewards of Being Frank, an uproarious sequel to Wilde’s comic masterpiece. Set seven years after the happy ending of The Importance of Being Earnest, that story’s two couples — Algernon and Gwendolyn, Ernest and Cecily — are married with children and are seeking a schoolmaster. Challenged by the pitfalls of mistaken identity, monetary mischief and a never-ending struggle over cucumber sandwiches, they need a tutor to sort out the confusion. That tutor is “Frank.”

In Earnest, Wilde portrayed Ernest’s questionable behavior as “bunburying.” In Scovell’s sequel for Cincy Shakes, Frank’s honesty and straightforward nature helps everyone be more “frank” about what they want. The imperious and fear-inspiring Lady Bracknell, one of Wilde’s most memorable characters, returns as well.

“This play works without being familiar with The Importance of Being Earnest, although knowing Earnest makes it even more enjoyable,” Phillips says.

Scovell’s script was inspired by a production of Earnest by New York Classical Theatre, according to Phillips. Burdman brought it to Phillips’s attention after Cincy Shakes hosted a 2019 meeting of the Shakespeare Theatre Association, bringing together classical theater companies from across North America.
Burdman will guest direct the show at Cincy Shakes and oversee its transfer to New York City for its off-Broadway debut in March at A.R.T./New York Theatre’s Mezzanine Theatre in Hell’s Kitchen. Cincy Shakes’ scenic designer Samantha Reno is creating the physical production for the stage at the Otto M. Budig Theatre as well as for its transfer to New York City. In essence, this is a rolling world premiere.

Phillips says this deliberate collaboration is a first for his company – “the start of a three-year plan working with them. We’re going to learn a lot from this.”

“This is an opportunity for us to be part of the national conversation here in Cincinnati when it comes to getting our work out there and produced for other theater professionals to see and share it with their audiences,” Phillips adds.

Several classic theater companies are invited to see the show in Cincinnati or New York to consider using it in a season that includes Wilde’s classic comedy.

Scovell will spend time in Cincinnati as rehearsals begin and then will return as the production is readied for its late January opening. Phillips says he is excited to work with a live playwright. In an interesting turn of events, once Russell finishes staging Dickless at Know, he’ll move a few blocks west to Cincy Shakes to direct a musicalized version of As You Like It in April.