Can you survive Friday, May 13 at Camp Crystal Lake?

Heads up, campers: It's time to celebrate the only Friday that falls on the 13th in 2022, and there's only one appropriate way to do it.

Friday the 13th plays at 9 p.m. May 13 at Esquire Theatre, which already is a treat. But right after the screening of the first film in the series, brave moviegoers can stay for a showing of Friday the 13th Part III, which begins at 10:50 p.m. This year marks the 40th anniversary of the third part in the Friday the 13th series.

If you’re new to these films, Friday the 13th begins at the seemingly harmless Camp Crystal Lake, a summer camp for children overseen by teenage counselors. There, a boy named Jason Voorhees, who had hydrocephalus, a build-up of extra fluid in his brain, drowned in the lake alone. The death is blamed in part on the negligence of two lusty counselors who shirked their responsibilities to get frisky in a barn instead of keeping an eye on the camper. Their murder leads to the camp’s closure for years as the unsolved slayings are a lingering reminder that a killer is on the loose.

Years later, a new group of counselors (including a young Kevin Bacon) attempt to re-open the camp after more than a decade of dormancy, despite the cryptic warnings of a disturbed old man caught prowling the campgrounds. Unluckily for them, the killings start anew on Friday, the 13th of June (Jason’s birthday), leading to a string of murders graphically portrayed on the screen. The effects were so shocking, so convincing, that the film largely benefitted from the controversy sparked over the “anatomically correct gore” achieved by the film’s special makeup and effects artist, Tom Savini.

If you’ve ever been grossed out by convincingly violent makeup or special effects in a horror movie, it’s likely Savini’s fault. The 75-year-old filmmaker is a legend in his field, and Friday the 13th is a gold-star horror series whose franchise is still incredibly influential (and profitable) today. Savini was in Cincinnati in March as a celebrity guest during the Sharonville Convention Center for HorrorHound Weekend, a spectacle featuring filmmakers, artists and vendors centered around horror movies.

Some of slasher movies’ toughest critics from the early days of the genre would have you believe the movies’ depraved content is indicative of the downfall of western civilization. Film critics Gene Siskel and Roger Ebert equated Friday the 13th to being the cinematic equivalent of getting out of your car just to look at dead bodies in an auto accident. They went as far as to produce a special 1980 series titled Women In Danger that specifically called out Savini and other filmmakers for exhibiting sadistic tendencies, typically toward women. Slasher movies were dismissed as F-grade sleaze that simply allowed disturbed audiences to live vicariously through the movie killer’s perspective. Fundamentalist religious groups boycotted many slasher movies or even picketed outside theaters that played especially controversial films — movies like Silent Night Deadly Night invoked strong objections from Christian groups appalled at the thought of a movie about an axe murderer dressed as Santa Claus as he spreads Christmastime mayhem.

“People are afraid of me,” Savini tells CityBeat. “There's so many times when a guy will walk up and his girlfriend’s, like, 50 feet away, ‘She's afraid to come up and talk to you. Will you say something to her?’ I just have that face. People are just afraid, and I'm really the most sensitive pussycat kind of a guy, if they only knew. Sometimes people just are afraid of me because they think that I'm a gore monger and I love killing people. It's just a job, I just did my job well, that's all.”

This slasher genre solidified itself in the mid-1970s and exploded into pop-culture through the 1980s. As with other notable slasher film series like Halloween, The Texas Chain Saw Massacre and A Nightmare on Elm Street, Friday the 13th features a ghoulish serial killer who murders victims with an edged melee weapon. This component in the story’s format is so vital, it literally defines the genre: slasher movies depict victims getting slashed to death. That’s certainly been the case in Savini’s work, which is essential viewing in the slasher filmscape.

Savini stepped away from the series for a few years after the first Friday the 13th film, but the spirit of his violent artistic vision prevails in Friday the 13th Part III. The first film was so popular that a sequel was rushed to production right away, as the distributors wanted to strike while the proverbial iron was still hot (an interesting turn of phrase, considering Jason Voorhees kills one of his victims with a red hot fireplace poker in the third film).

Part III, which hit theaters in 1982, originally was screened in 3D, a gimmick used to make action on the screen seem to jump right at audiences — seemingly perfect for slashers. During its anniversary screening, Esquire Theatre will show the traditional 2D film experience, but this is not a bad thing. Many of the 3D effects in Part III are silly, uninspired gags that feel more like test footage than a reason to don blue and red glasses for 95 minutes.

Everything We Saw at HorrorHound Weekend at the Sharonville Convention Center

The power of Friday the 13th Part III

Do you love slashers enough to study them? University of Cincinnati professor Bryce Bullins teaches horror media — including a course on slasher films — for the English department. Bullins also focuses on works by novelist Stephen King and, as a literal expert on horror films, it’s a happy coincidence that Part III is his favorite entry in the Friday the 13th series.

“I really enjoy Part III a lot because it’s where Jason gets his iconic hockey mask and becomes a force of pure evil,” Bullins says. “In Part II there’s an argument to be made that Jason is tortured, troubled and disturbed – not that this excuses his murdering, of course – but in Part III, any pretense of complexity is dropped in favor of creative killing and establishing him as an unstoppable, unkillable force.”

It’s not a complete tragedy that Part II won’t be included at Esquire’s double feature, though the film is a fan favorite. The first few minutes of Part III give a nice recap of its predecessor’s climactic third act, in which we see Voorhees, clad in a burlap sack before he became synonymous with the menacing hockey mask. He also attacks the film’s heroine with a pick-axe as she fights back with his own iconic machete. Part III picks up immediately after the events of Part II and, in many ways, the third film is largely a remake of Part I, for better or worse.

“Detractors call the film formulaic, but I would argue that that’s the point. ‘If it ain’t broke, don’t fix it,’” Bullins says. “Part III was made on a budget of $2.2 million and grossed $36.7 million at the box office. It’s not hard to see why studio executives and even the filmmakers didn’t want to change the formula too much.”

For decades to come, the slasher formula hasn’t strayed far from its bloody roots. While Friday the 13th wasn’t the first slasher, it’s certainly not the last. The genre prevails in theaters and streaming services today thanks to the recent Texas Chainsaw Massacre, Halloween, Scream, Child's Play and Evil Dead sequels and reboots.

Savini has some thoughts about why audiences are still so fascinated with slasher films.

"When I was a combat photographer in Vietnam I saw horrible violence. So, my brain is filled with all that stuff. But the average person, you know, living a docile life and working from nine to five, they're not privy to stuff like that," Savini says. "For them, it's something they've never seen before."

"If you watch a Friday the 13th movie – not necessarily the first one, but certainly a few that came afterwards – I'm sure you sat there and said, ‘Please kill this asshole. In the next 10 minutes, please kill him.’ I think that's part of it, you know," Savini continues. "And then you are placed in the position of having the point of view of the killer and that was really exciting to people. It’s thrilling. My two word answer: it's thrilling."

On top of his cinematic career, Savini now runs Tom Savini’s Special Make-Up Effects Program at the Douglas Education Center in Monessen, Pennsylvania. There, he educates up and coming makeup and effects artists in his craft, training a new generation of shocking filmmakers. To learn more about this program, visit dec.edu/ts. 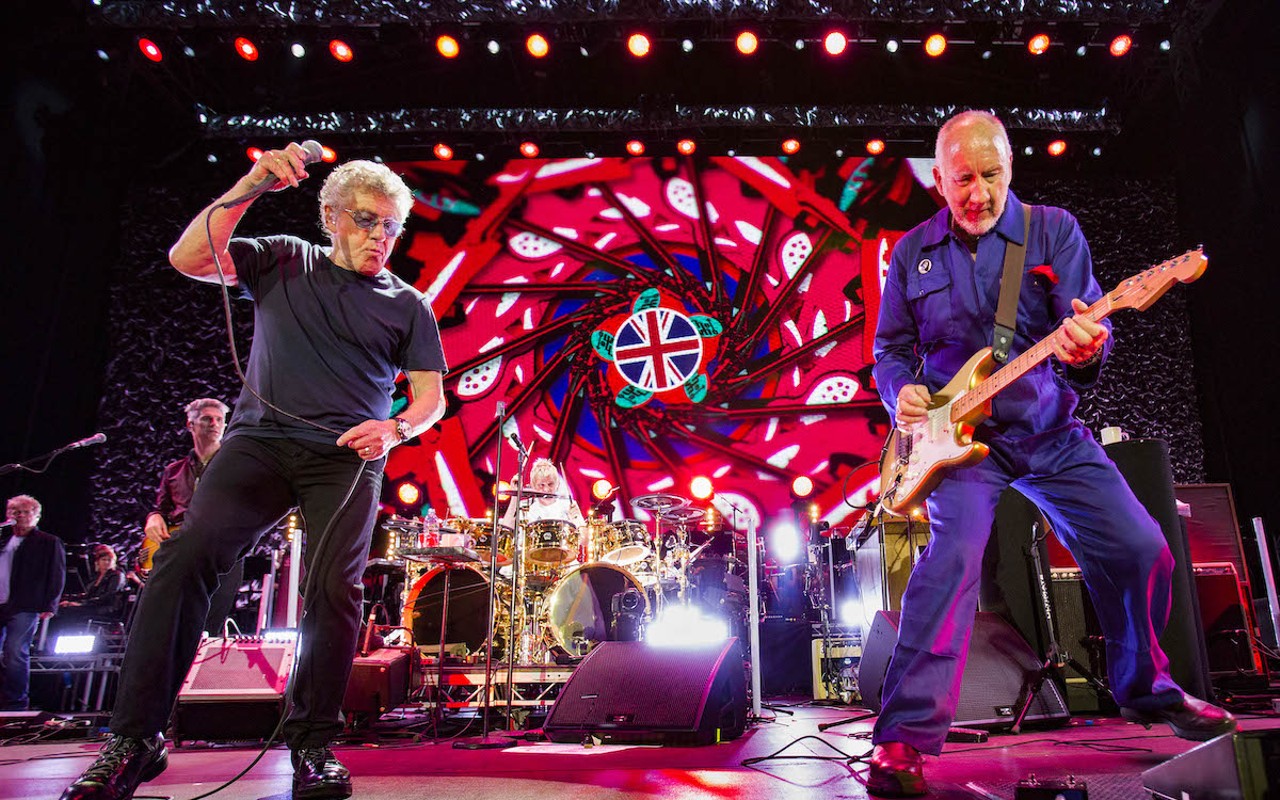 16 Things To Do in Cincinnati This Weekend (May 13-15): From a reproductive rights protest to live music and antique shows, this weekend has something to offer every sort of Cincinnatian.