Young Son of Cincinnati Reds' Nick Castellanos Designed a Shirt, and You Can Buy It

Cincy Shirts is selling the shirt, which was seven-year-old Liam's gift to his baseball-playing dad. 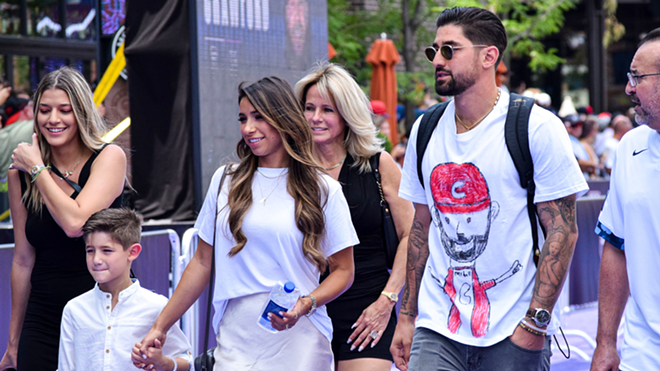 It looks like there’s a young artist with a bright future in fashion in Cincinnati.

The shirt was a 29th birthday gift from Castellanos' seven-year-old son Liam, and it featured the boy's drawing of his dad in a Reds uniform, holding baseballs in his hands and saying “play ball.”

The shirt quickly grabbed the attention of the Reds’ social media team and began spreading all across Reds Country.

But the story doesn't end there — now fans can buy Liam's shirt themselves.

Cincy Shirts, which has stores in Hyde Park and Over-the-Rhine, has officially licensed the design through Liam and the MLB Players' Association. With Liam's approval, the local shirt shop is selling adult's and children's t-shirts and baby onesies that feature Liam's now-famous drawing of his bearded father. The apparel also is available at stores within Great American Ball Park.

The items feature Liam's signature and retail for $30. A portion of each sale will go toward the charity of Liam’s choice, according to the Cincy Shirts website. The seven-year-old is currently researching children’s charities in the area.

In addition, those who purchase Liam's shirt will be entered to win a baseball signed by both the young artist and his homerun-hitting dad.

In a post-game interview on July 17, Nick Castellanos told WLWT-TV that his son is “absolutely beside himself” after the shirts went on sale.

Michelle Castellanos — Nick's mother and Liam's grandma — also is proud of the family's budding entrepreneur. She filmed this sweet video of Liam seeing his shirts on sale at Great American Ball Park for the first time:

Castellanos and Jesse Winker were starters for the 2021 MLB All-Star Game in Denver on July 13. The National League lost to the American League.