After a heavy second season that had many viewers wondering if drama would be a more appropriate genre designation than comedy (particularly for television awards), the ladies of Litchfield Penitentiary look to lighten things up in Season Three. 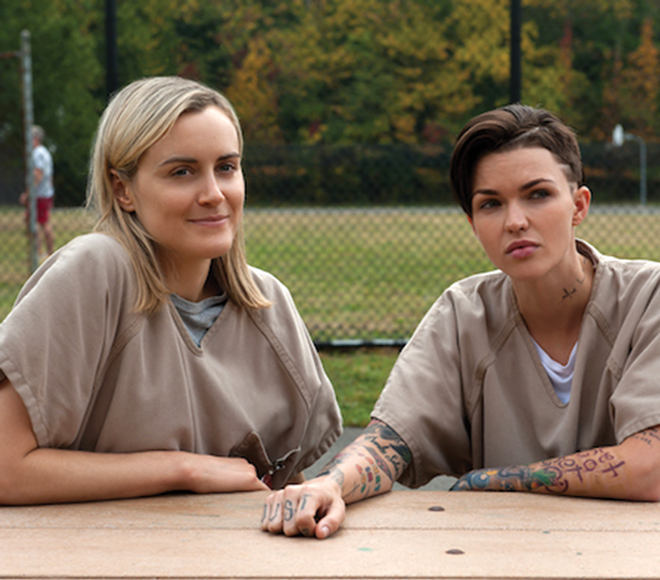 After a heavy second season that had many viewers wondering if drama would be a more appropriate genre designation than comedy (particularly for television awards), the ladies of Litchfield Penitentiary look to lighten things up in Season Three.

Yes, Orange Is the New Black (Season Premiere, Netflix, Friday) is back for your binging pleasure with a growing solid cast, and more laughs, tears and WTF moments that will continue to dance on the drama-comedy line. Here’s what we know:

Alex is back (thanks to Piper). We didn’t see a whole lot of Alex last season (to recap: she threw Piper under the bus to get an early release, only to end up hiding in fear of her former boss, who also got off), but Piper aimed to change that by double-crossing her right back. The exes are now both at Litchfield.

Motherhood is a major theme. Relationships between women in and out of prison (mothers and daughters, lovers and friends) is obviously a focus throughout the series, but Season Three highlights motherhood like never before: Crazy Eyes has a hard time accepting Vee’s (certainly a mother figure to many) fate; Daya is ready to pop and become a mother herself; we get Boo’s backstory and learn about her mom; the premiere episode even takes place on Mother’s Day.

Larry and Pornstache are out. This season will not focus on those guys, though they’re not out of the story altogether (Larry’s run off with Polly; P.S. is in prison).

Mary Steenburgen, Ruby Rose and Mike Birbiglia are in. While we won’t see much of Pornstache, we will get to meet his mother (Steenburgen) #MamaStache. Australian actress Rose portrays a new inmate and possible love interest for many serving time. And Litchfield’s new ownership comes with fresh faces, like comedian Birbiglia.

Skin Wars (Season Premiere, 9 p.m., GSN) – Rebecca Romijn hosts this body-painting reality competition with a panel of judges that includes RuPaul. Cincinnati’s own Aryn Fox competes against 11 other artists for $100,000, a trip to the World Bodypainting Festival in Austria and more prizes.

The Comedians (10 p.m., FX) – When the show is in need of a director, head writer Mitch steps in. Later, Billy signs off on hiring Josh’s director friend, who pushes for an improvised sketch to be shot in the woods at night.

Hannibal (10 p.m., NBC) – Will Graham finally resurfaces, awaking from a coma and trying to make up for lost time. His search leads him to Italy, where he finds Hannibal’s, um, heartfelt gift along with an investigator who believes Hannibal may have been behind a string of murders in Florence 20 years ago.

Game of Thrones (Season Finale, 9 p.m., HBO) – [Still screaming over last week’s episode] Fresh off Drogon Airways, Dany finds herself surrounded by strangers. Stannis and his army march to Winterfell; Cersei confesses her sins; Jon faces a setback (seriously, what does Olly have up his sleeve?).

Silicon Valley (Season Finale, 10 p.m., HBO) – Erlich considers his next move while Richard scrambles to save the company. Meanwhile, the guys back at the Hacker Hostel scramble as the condor cam livestream experiences a traffic spike due to that poor dude who fell trying to take down the camera.

Veep (Season Finale, 10:30 p.m., HBO) – Selina and her staff anxiously stand by on Election Day as state-by-state results come in.