The research library is currently displaying a copy of the 1705 edition of Maria Sibylla Merian's "Metamorphosis Insectorum Surinamensium," which contains extremely detailed illustrations of plant life, insects and reptiles. 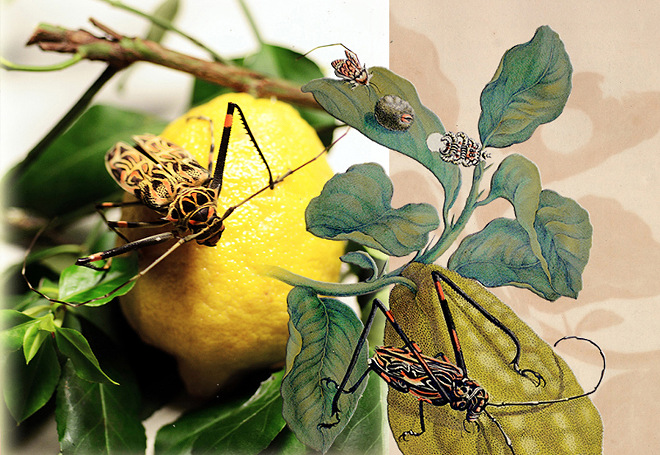 Photo: Courtesy of the Lloyd Library and Museum
Maria Sibylla Merian saw and drew these beetles in Surinam.
The New York Times in January alerted the world that 2017 would be the year that Maria Sibylla Merian — a European artist, botanist, naturalist and entomologist who had died three centuries earlier — would finally be getting her due.

The story was headlined “A Pioneering Woman of Science Re-emerges After 300 Years.” It was a fascinating account of how the German-born, Netherlands-residing Merian spent two years in the Dutch South American colony of Surinam with her daughter, observing plant life, insects and reptiles. She drew what she saw in beautiful illustrations with life-size detail. The result, the 1705 book Metamorphosis Insectorum Surinamensium (Transformation of the Insects of Surinam), contained 60 prints and, if more people knew about it, could be considered a key precursor to Audubon’s early 19th-century Birds of America. But the original edition of her book is extremely rare — perhaps just 70 copies exist.

One reason for the Times story was that there had just been publication of a new edition of the book. Another was that the Maria Sibylla Merian Society was co-sponsoring a (just-completed) symposium on her.

Fortunately, the year of Merian has also come to Cincinnati. Downtown’s Lloyd Library and Museum — primarily considered a research library devoted to books and papers about natural history, botany, pharmacy, medicine, scientific history and visual arts — is currently displaying a copy of that 1705 edition of Merian’s Metamorphosis Insectorum Surinamensium, along with other books by her and a companion taxidermy art exhibit in a show called Off the Page. It’s up through July.

Lloyd Executive Director Patricia Van Skaik says this exhibit came about when local taxidermist/artist Jeremy Johnson was invited last year to look at its collection for something that might pair well with his work. “These books were shown to him and he became completely entranced,” Van Skaik says. He has made three-dimensional versions of some of Merian’s illustrations.

The 1705 book is in a glass case under newly installed LED lighting. It came from the entomologist John Thomas Lloyd, who died in 1970 and was the son of John Uri Lloyd, one of the library’s founders.

It has been exhibited before, says Betsy Kruthoffer, the Lloyd’s cataloger/rare book librarian, “but not as the showpiece it is now.”

The book’s written passages are in Dutch and there are 60 painstakingly hand-colored prints — such as one of the lemon-like citron fruit with Harlequin beetles crawling on its leaves and on the fruit itself. The 2016 edition of Metamorphosis Insectorum Surinamensium provides an English translation of Merian’s equally colorful written observations accompanying this print: “On this tree, I found a strange and very uncommon kind of creature… They ate these leaves, stuck to them as snails, having a skin on their feet with which they cling to the leaves.”

According to Kruthoffer, Merian and her daughter spent approximately five years engraving, printing and coloring the prints for the book, which was sold by subscription. (Merian’s father was an engraver.)

The Lloyd actually has four other historic editions of Merian’s book, although only the 1705 Metamorphosis Insectorum Surinamensium was published before she died in 1717. All the books are in this exhibit, allowing for comparisons and contrasts.

The republished 1718 Erucarum Ortus, with Latin text, is an earlier book Merian had made depicting European caterpillars. Then there are two versions (one in color, one not) of a posthumously published 1730 Metamorphosis Insectorum Surinamensium, containing an additional 12 plates of drawings of reptiles. And there are two volumes of a 1771 edition — the last time prints were made from her original engravings.

The Lloyd knows it has a show — and an overall collection — with populist potential. It has scheduled several upcoming programs about Off the Page, including a dessert reception and lecture at 5:30 p.m. Friday. It’s also planning to open a gift shop with Off the Page-themed merchandise. So if it’s up to the Lloyd, Merian will be unknown no longer — especially in Cincinnati. For more information, visit lloydlibrary.org.