"On the Wing: An Illustrated Chapter on Birds" highlights the Lloyd’s treasure trove of ornithology books and bird field guides, plus new paintings. 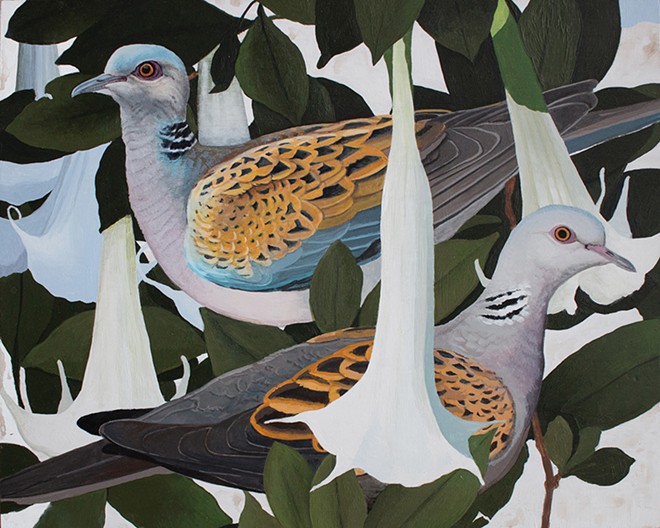 As birds migrate back to Greater Cincinnati for spring and summer, they’ve also taken over downtown’s Lloyd Library and Museum.

On the Wing: An Illustrated Chapter on Birds highlights the Lloyd’s treasure trove of ornithology books and bird field guides — an often-overlooked part of their collection — that date back as early as the 1600s. From illustrations of the extinct dodo to a book by Ferdinand Schuyler Mathews transcribing birds’ vocalizations into sheet music, the exhibition is a birder’s dream. Also on display are taxidermied bird specimens, some extinct and others still around, from the Cincinnati Museum Center. An on-site gallery features modern paintings from twin sisters and naturalists Alex and Shae Warnick from Columbus, Indiana, the latter of whom served as an artist in residence at the Lloyd in 2020.

Like the exhibition itself, much of the Warnicks’ work pays homage to ornithologists throughout history whose contributions have led to a better understanding of various bird species and their habitats. Many of the books on display at the Lloyd are ones Shae pulled for research and inspiration during her month-long residency.

Speaking over Zoom, Shae gestures at hanging prints of illustrations by Alexander Wilson, aka the “father of ornithology.” They’re from his 1831 book American Ornithology, which she gushes about poring over.

“The Lloyd has some of the famous books by naturalists that I had always heard about,” she says. “There are some famous ones that I had seen the images of many times on the internet but then to be able to go and actually see the real prints in those books was such a neat experience. I absolutely loved it.”

The Queen City and the surrounding region served as a hotspot for many famed naturalists, including John James Audubon, whose brief stay here in 1819 saw him as the first taxidermist at what became the Cincinnati Museum Center. The placard accompanying the display of Audubon’s The Birds of America in On the Wing reads: “Arguably the most famous bird book in the world, the original ‘double elephant’ edition was published in 1827-1828 and contained 435 life-size watercolors of North American birds. Audubon drew dead birds so that he could pose them artistically.”

Shae says her stay at the Lloyd gave her the chance to look at how the field of ornithology evolved century-to-century in terms of its visuals, language and views from the 1500s all the way to the 1900s. Those early books, she explains, very much tied nature to religion before moving into the romantic eras and later more scientific, objective depictions. 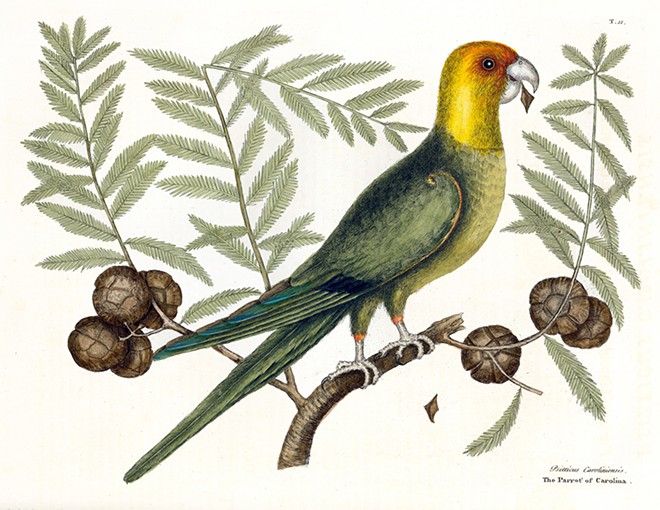 Photo: Provided by Lloyd Library and Museum
“The Parrot of Carolina” by Mark Catesby from his 18th-century book The Natural History of Carolina, Florida and the Bahama Islands

While Shae’s work has focused heavily on the field’s early days up to the late 1800s, Alex’s leans more toward the modern naturalists of the late 1800s and 1900s.

“We always say that we walk parallel paths, but not the same path,” Alex says during the same Zoom call. “We are very similar, share a lot of the same interests in subject matter but our methods of depicting them are different.”

Their initial interest in the field goes back to childhood, but it was Alex who first fell into ornithology after reading a book describing the profession at age 10. From there, she dragged the entire family “one by one” into loving birds, she says, including Shae.

With a background in science illustration for field guides, books and magazines, Alex’s paintings tend to have more three-dimensional depth of field and are representational. She works mainly in watercolor and with subjects in nature.

Shae, whose paintings are more flat, uses oil- and acrylic-based mediums and draws experience from working inside museums, with research collections and specimen birds.

“I’m really interested in the ways people view nature, so there’s a human aura in my paintings,” Shae says, “like someone was pressing the plants or arranging the specimens. You can tell there’s something unnatural about it. And Alex, her depictions of nature are more of those natural scenes we love so much when we’re actually out in nature.”

Through their work, they aim to encourage people to foster an appreciation of nature and conservation efforts, albeit in different ways, even if it’s in their backyard or other small spaces. 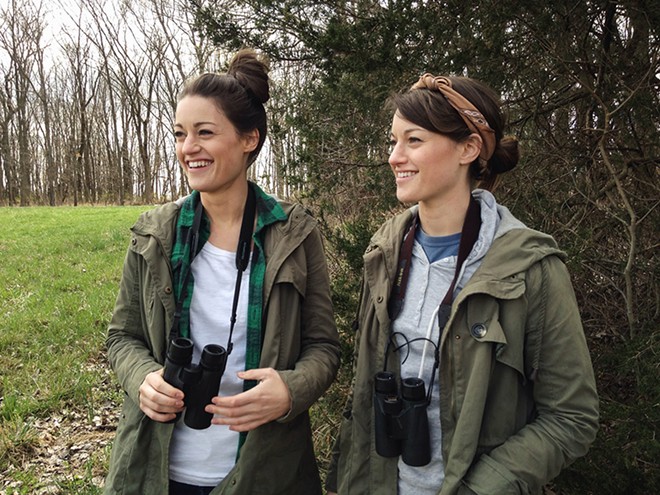 Photo: Provided by the artists
Alex (left) and Shae Warnick have paintings on display in the On the Wing exhibit at the Lloyd Library and Museum.

“Even when I’m not working directly with scientific organizations, all my art, I’m always trying to highlight and show people what I think is wonderful about birds,” Alex says. “And hopefully do them enough justice that it sparks something in other people.”

When asked what they love about each other’s art, Shae says that while she doesn’t necessarily try to emulate the naturalists from history, Alex is the modern version of those figures. Of Shae, Alex admires the concepts, deep level of research and thought process that goes into her sister’s paintings, which she says brings whimsy to what most would see as an academic subject matter.

“We say all the time that we’re each other’s favorite artists,” Alex says, “not necessarily because we think the other one is the best artist but because obviously if it’s your twin, you have the same tastes and you love what they’re doing.”

On the Wing runs through June 18. Several related programs focused on topics including conservation efforts, technology and social justice will accompany the exhibition. The lineup includes: “Bird Monitoring Technology for Migrant Bird Conservation” with David Russell on April 21; “Bird Migration Field Trip with Cincinnati’s Audubon Society” on May 15; “Freedom Birders: Birding for Freedom and Justice” with Tykee James and Jeffery Train on June 2; and “The Power of Nature Photography for Bird Conservation” with Jim McCormac on June 8.

On the Wing is on display at Lloyd Library (917 Plum St., Downtown) through June 18. More info: lloydlibrary.org.