Local Author Sheila Williams Gets a Netflix Adaptation with 'Juanita'

Based on Sheila Williams' "Dancing on the Edge of the Roof," this Netflix original stars veteran actress Alfre Woodard 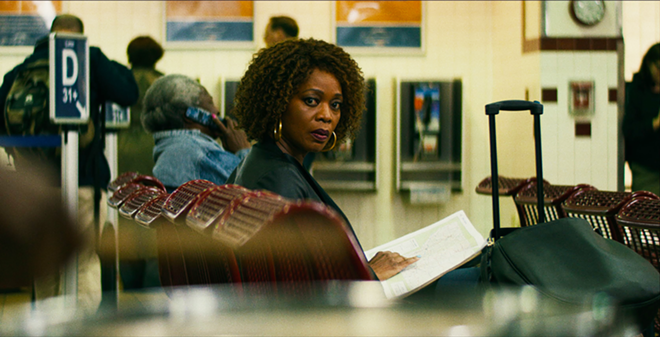 When Sheila Williams — a local author based in Newport — first sat down to write Dancing on the Edge of the Roof, she was having one of those days, the kind where everything seemingly goes wrong.

The film opens on its namesake, Juanita Lewis, who needs a reprieve from her life. In short: She’s fed up. And so she does something most of us only wish we could do — she packs up her suitcase and heads for the road, leaving her three grown kids, her work as a nurse and her home behind. Oh, and her Blair Underwood sexual fantasies. (Mostly.)

“People, at a certain point, feel that they want to make a change,” Williams says. “And it’s not necessarily a midlife crisis experience, it’s just whenever you get that feeling that maybe you can do something better or different — maybe you don’t know what that is — but you have to make that change; no one can make it for you. You just have to get a little courage and go.”

Directed by Clark Johnson and written by Roderick M. Spencer, the romantic-comedy is an escape in its own right. It's the kind of flick ideal for a Friday night in after a tiresome work week or discouraging news cycle.

“It’s fun. It’s great. I’m in awe; I’m humbled by it. I’ve enjoyed it,” Williams says of her book becoming a movie. “It’s been very inspirational for me because — in my daydreams — it never occurred to me that this would come true. So I’ve enjoyed every moment of it.”

Shortly after Juanita first lands in Butte — a (very) small town — she settles into a local French diner. Since the cook, played by Adam Beach, won’t just make eggs scrambled with a side of bacon and buttered toast, Juanita is invited to join the kitchen herself, in which she tells another employee to “spread the word. Black lady cooking at the diner.” As it turns out, the community loves her grub.

That’s where the rom-com element comes to play: The cook emerges as a love interest. But — as Juanita reiterates — this tale isn’t about her falling in love with a man. No: It’s about a middle-aged black woman finally taking time for herself.

And that’s the image Juanita leaves us with: She takes a trip to California to see the ocean and strolls down the beachside without a care, brushing off a stray (and shirtless) Blair Underwood fantasy.

Because, folks, she chooses herself. And that’s the shit I like to see.