A few raunchy jokes make the chaos of the holiday season go down a bit more smoothly. 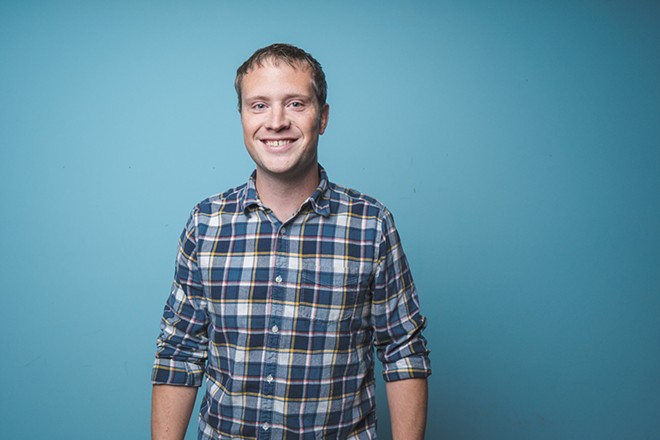 December is a great month for comedy in Cincinnati, with many homegrown comics returning to the Queen City to entertain the masses.Here are the top eight can't-miss comedy gigs in Cincinnati during the month of December.

Mike Cronin at Go Bananas Comedy Club
“I have a brand new comedy special that just debuted at the end of November on YouTube,” Cincinnati’s own Mike Cronin tells CityBeat. “It's called Thick Worm.” After starting his career here, he moved to Chicago. After falling in love with a gal from Detroit, he moved to the Motor City. “We’re not married yet, but everything is going very well,” he reports. “I am talking a lot about parenting and my relationship with my fiancée,” he adds about his act. “I'm in the beginnings of building the next hour, so I have a lot of the old stuff in there but replacing it with my new material little by little.” Dec. 1-4 7:30 and 9:45 (Friday and Saturday). $15. Go Bananas Comedy Club, 8410 Market Place Lane, Montgomery, gobananascomedy.com.

Godfrey at the Liberty Funny Bone
“Kids don’t appreciate things anymore,” says comedian Godfrey. “Simple things like McDonald’s would excite me when my father would take us there. My brother and I would have convulsions.” That’s the same father Godfrey famously compared, at least vocally, to The Lion King’s Mufasa. Friends calling the young Godfrey often heard a voice close to James Earl Jones saying, “Godfrey is not here.” Natives of Nigeria, his parents fled during the unrest in that country in the mid-1960s. Godfrey sometimes thinks the family’s hardships may have been exaggerated. “They tell you anything,” he says. “‘We were so poor that we only had one shoe and we shared it.’” To which Godfrey now responded, “Really? I think you was lying.” Both he and his brother were born in the United States, while his older sister emigrated from Africa. “I’m still going to turn her in,” he laughs. Dec. 2-4, 7:30 p.m. and 10 p.m. Friday; 7 p.m. and 9:30 p.m. Saturday; 7 p.m. Sunday. $27. Liberty Funny Bone, 7518 Bales St., Liberty Township, liberty.funnybone.com.

Dusty Slay at Liberty Funny Bone
Dusty Slay may look familiar to you. He often gets told he looks like the David Spade character Joe Dirt, or Mike Meyers’ Wayne Campbell of Wayne’s World fame. A top headliner, Slay was the youngest comic to ever perform at the Grand Ole Opry. The Alabama native left the exterminating business in 2004 to pursue comedy. He joined the improv scene in Charleston, South Carolina, an unlikely comedy market, to be sure. After a few attempts at stand-up, he took a break, and then went back at it in 2008. He’s never looked back. Dec 9-10, 7:30 p.m. and 9:45 p.m. Friday and 7 p.m. and 9:30 p.m. Saturday. $25. Liberty Funny Bone, 7518 Bales St., Liberty Township, liberty.funnybone.com.

Mark Chalifoux at Go Bananas Comedy Club
Mark Chalifoux, a former local radio producer, spent several years honing his craft in New York City before deciding he wanted to raise his family back home in the Tri-State. It’s all working out. “I recorded my first special for Dry Bar Comedy this year,” he tells CityBeat. “It was the first full audience for one of their TV tapings since pre-COVID, and it was a blast. That will be coming out early next year.” He also has several of his bits from his first album in rotation on SiriusXM. A new album is in the works for 2023. For his upcoming appearance at Go Bananas, he’s doing something a little different. “I’m filming a special to capture what a night in a comedy club feels like,” he adds. “It’ll have crowd work and less of a sense of urgency that a proper special has. It should be fun!” Dec. 15-18.  7:30 p.m. and 9:45 p.m. (Friday and Saturday). $15. Thursday show is $10. Go Bananas Comedy Club, 8410 Market Place Lane, Montgomery, gobananascomedy.com.

Josh Sneed at Ghost Baby
St. Bernard native and national headliner Josh Sneed will be doing the first-ever comedy show at Ghost Baby in Downtown on Sunday, Dec. 18. The show is being organized by his college buddy and AGAR founder Josh Heuser. “I’ve known him for a long time and have been amazed watching him help shape and reshape the Downtown scene on so many levels. I love people who share the desire to make Cincinnati shine,” Sneed tells CityBeat. Ghost Baby was recently named by Esquire as one of America’s top bars. Sneed plans to record what he’s calling a greatest hits album that night. 10 p.m. Dec. 18. $25. 1314 Republic St., Over-the-Rhine, ghost-baby.com.

John Morgan at the Liberty Funny Bone
When you think of a road warrior comic, one name that should come up is John Morgan. Traveling to so many places over the years, he’s comfortable in most any city. “Being a comedian is definitely being a chameleon,” the Louisiana native tells CityBeat. “You’re able to blend into different cities.” The years of experience give him a unique perspective on the country, and he couldn’t be happier. “My career has blossomed. It’s opened up. I think where I am right now is where I want to be. I’m really blessed and fortunate.” Dec. 16-17, 7:30 p.m. and 9:45 p.m. Friday and 7 p.m. and 9:15 p.m. Saturday. $20. Liberty Funny Bone, 7518 Bales St., Liberty Township, liberty.funnybone.com.

Dave Waite, Go Bananas
Another comic making his way back to the area for a run of shows is Northern Kentucky’s Dave Waite. After a few years in New York City, he relocated to Los Angeles, where he is currently based. He’s always happy to come back to Cincinnati and Northern Kentucky, though. Dec. 29-31 7:30 p.m. and 9:45 p.m. (Friday and Saturday). $10-$40. Go Bananas Comedy Club, 8410 Market Place Lane, Montgomery, gobananascomedy.com.

Jason Banks at the Liberty Funny Bone
After winning numerous contests throughout Ohio, including the Funniest Person in Columbus, Jason Banks hit the road and worked comedy clubs all over the country. He’s made several appearances on Tru TV’s Laff Mobb’s Laff Tracks, and many of his bits are featured on Kevin Hart’s LOL Network. On stage, he talks about everything from haunted houses to walking in on his parents being intimate when he was 9. Dec. 30-31, 7:30 p.m. and 10 p.m. Friday and 8 p.m. and 10:30 p.m. Saturday. Prices vary. Liberty Funny Bone, 7518 Bales St., 120, Liberty Township, liberty.funnybone.com.