Mandela’s Legacy at the Freedom Center

'Mandela: The Journey to Ubuntu,' on display through Aug. 20, features more than 40 photographs by Matthew Willman that document Mandela's life. 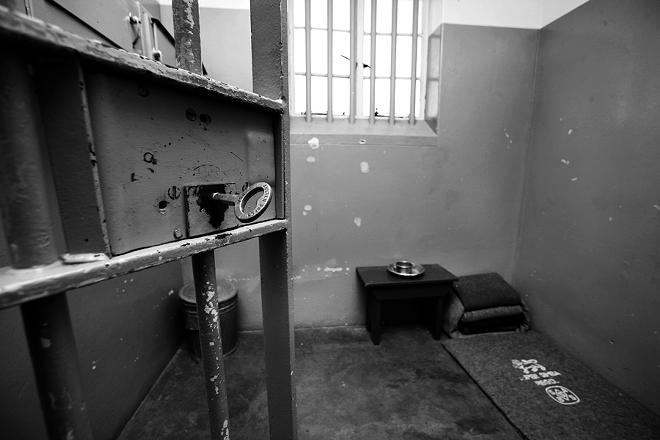 Photo: Matthew Willman
Photograph of Nelson Mandela’s Robben Island prison cell
When Matthew Willman was 14 years old in 1994, the 75-year-old Nelson Mandela became president of South Africa. It was the end of the country’s apartheid system of government, which had slowly but sometimes violently been coming apart as a white minority tried to limit the black majority’s rights. Though Willman knew nothing about politics as a young boy, he was compelled by Mandela’s grandfather-like, anti-racist presence.

“Mandela was the only man capable of taking the reins in our country and drawing people together instead of creating anger, violence and retribution,” Willman says. His fascination with Mandela did not stop, and he finally got to meet the man some nine years later.

At that time, Willman lived on Robben Island in South Africa to photograph its historic structures. It had been the home of the country’s maximum-security prison for political prisoners, and Mandela had spent 18 of his 27 years in jail for opposing apartheid there. In doing his work, Willman earned the Nelson Mandela Foundation’s attention. He was then hired to document the final years of Mandela’s life. He died in 2013 at age 95.

More than 40 photographs taken by Willman are now on exhibit in Mandela: The Journey to Ubuntu at the National Underground Railroad Freedom Center. It takes visitors on a journey through Mandela’s life and South Africa’s route to racial equality. Willman came to Cincinnati for the exhibit’s recent installation.

“Mandela reminds us what it is like to be human,” he says.

The photographic journey begins in Mandela’s birthplace in the village of Mvezo and follows him to the cities of Johannesburg and Pretoria, where Mandela and other anti-apartheid activists went on trial in 1963, and finally to Robben Island. Four of the photos on display were personally chosen by Mandela to represent the 18 years he spent imprisoned there. Perhps the most moving photo is a simple close-up of Mandela’s hand.

The exhibit also includes artifacts from Mandela’s life on loan from the Nelson Mandela Foundation. They include recorded segments of the famous “I Am Prepared to Die” speech he gave from the defendant’s dock in a Pretoria courtroom and a replica of Mandela’s prison cell on Robben Island.

“We want the audience to be able to walk into a space (and feel) that they’ve left Cincinnati,” Willman says. “They’ve left their world and, by walking into a space, they’re now standing back in Africa.”

“Ubuntu” is a Nguni Bantu word that means “humanity to others” or “I am what I am because of who we all are.” Although the exhibit specifically follows South Africa’s journey, Willman hopes the universality of Mandela’s life will serve as a platform for the American audience. They can then consider what Mandela would do to solve current issues. The overall message of the exhibit is one of hope, looking for ways to preach tolerance and unify all people.

For Willman and Mandela, the term “ubuntu” is more about the process of achieving a goal, not the goal itself, Willman says. Like Mandela, those who strive for peace and justice may be imprisoned or even killed before their goals can be fully realized.

“(Mandela) set such a high bar in South Africa that we are still trying to attain those high ideals he worked so hard for,” Willman says.

Aside from perseverance, the most important lesson visitors will learn from the exhibit is forgiveness. Mandela: The Journey to Ubuntu stresses why Mandela forgave his oppressors and encouraged the rest of the world to do so. In his eyes, to forgive meant to say the atrocities of the past will never happen again. Knowing history is important, Willman says, and is a reason for this exhibit — forgetting about the past will lead to repeating injustices that once happened.

Jamie Glavic, the Freedom Center’s director of marketing and communications, says, “People are going to leave this exhibit thinking, ‘How can I make my corner of the world a better place?’ ”

MANDELA: THE JOURNEY TO UBUNTU is on exhibit at the National Underground Railroad Freedom Center through Aug. 20. Tickets/more info: freedomcenter.org.