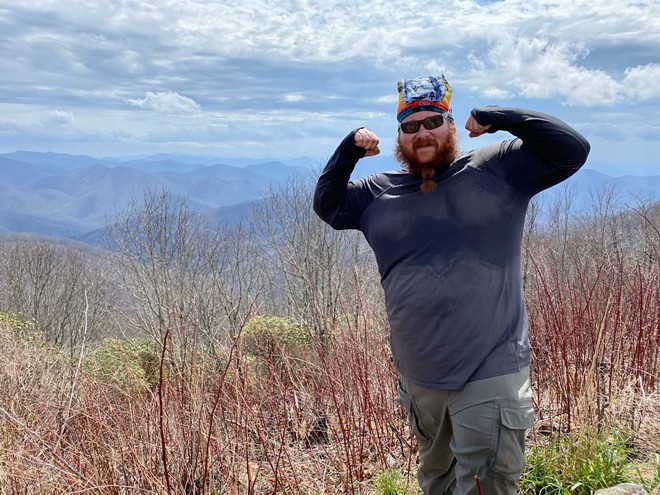 Photo: provided by Matt Noonan
Matt Noonan is on the Appalachian Trail.


Every year, more than 3 million people walk a portion of the Appalachian Trail, the world’s longest hiking-only path. A fraction of them are “thru-hikers” who set out to complete the trail, end to end, in one trip.

Making the 2,194-mile journey is a feat in its own right. A Milford man set out March 15 with a mission to not only complete the trail but also to lay a foundation for creating a non-profit that raises awareness for mental health issues and suicide prevention.

Matt Noonan began the northbound, 8-mile approach trail in Georgia with two things on his mind: Maine — where the trail ends — and Eyes Opened Outdoors, the non-profit he’s developing.

“Right now I’m trying to just create a foundation,” Noonan says. “When I finish the trail and get to Maine, that will give me credibility. I did do this. It wasn’t just a thought; it was a thought that turned into a dream, a dream that turned into an action and that action got completed. So once I’m done with that, I’ll take the steps to do the actual paperwork side of making it an official non-profit.”

When CityBeat speaks to Noonan on April 21, he’s about 130 miles into his journey and is settling into a hostel for a night at Nantahala Outdoor Center’s Basecamp in Bryson City, North Carolina. As a Class A CDL driver, Noonan covers a lot of ground daily, but he hadn’t done so quite like this. He lacks significant hiking experience but uses that as a source of motivation rather than a deterrent. Noonan’s personal struggle with depression and mission to aid others experiencing it is what fuels him, and he says facing the various challenges of the trail can be used as a metaphor for fighting depression.

“Never give up on a bad day,” Noonan says. “Persistence beats resistance.”

He frequently repeats this to himself and to the social media following he’s gained since setting out on the Appalachian Trail, emphasizing that even the smallest accomplishments — like getting out of bed (or your tent) or taking a shower — can be life-changing for someone who is experiencing depression. In order to get people excited for the eventual launch of Eyes Opened Outdoors, Noonan produces live videos on Facebook from the trail almost daily. He keeps his followers updated on his location, mood, snacks and beard upkeep while answering questions and inspiring viewers on and off the trail.

Noonan says he averages 8-10 hiked miles daily, going 13.2 miles on his most productive day as of press time. He anticipates finishing the trail in the fall, but will be dictated by his daily pace.

“You realize out here that nobody is going to help you but you,” Noonan says. “You are the controller of your own destiny. The other day I was gassed, could barely move, I didn’t have enough calories in me. But here’s the thing: there’s no one to call. You can’t call an Uber. It’s you. You are the one that’s in control, and so you have to persevere. You have to learn to be self-reliant, and you have to just know that you’re the only one that’s got your back.”

Noonan exudes raw emotion in his video segments, sparing no details about what he’s feeling. The range is real and is affected by the treacherous nature of the Appalachian Trail, which is almost never flat. According to the Appalachian Trail Conservancy’s website, the total elevation gain and loss is 464,500 feet, equivalent to hiking Mt. Everest from sea level and back 16 times. It takes the average hiker 5-7 months to complete, weaving through 14 states.

A person could expect to spend $5,000-$7,000 to hike the trail comfortably, according to the Appalachian Trail Conservancy. Noonan is averaging $100 a week and relies mostly on donations to refuel financially.

No matter if Noonan is discouraged, having a bad day or feeling positive and (literally) on top of the world, viewers know about it. He has connected with viewers before even getting out of his sleeping bag, while felling dead and dangerous trees with his bare hands and while nearing hypothermia when on a mountain during heavy snow.

On April 4, Noonan posted an hour-long video showing what’s inside his backpack and answering viewer questions to educate to-be hikers about what to bring on the trail. He says a few random hikers have even recognized him in passing from his Eyes Opened Outdoors social media accounts, though it also could also be due to his signature look: a long, red beard in a ponytail, born out of necessity to keep it from turning into a dread, he says.

Noonan’s jovial spirit and ambition shine during monologues in which he shares 360-degree views from mountaintops. The hiker says how you overcome the bad days, even a little at a time, can reframe perspective. It’s always, “just one foot in front of the other,” he says. His words are seemingly one of the most important tools he brought with him to the Appalachian Trail, even among the necessities in his pack, which weighs about 45 pounds.

Unlike many hikers, Noonan didn’t decide to complete the Appalachian Trail out of a passion for hiking. Instead, the motivation harkens back to a trip that made him realize that being in nature was one of the only things that soothed the bout of depression he had been going through.

“It all started in 2017, when my buddy ended up taking his life. It put me in a super dark place where I almost ended up taking my life in 2019,” Noonan says, “I went hiking out in the Red River Gorge and ended up wanting to go live in Alaska or something like that. I just wanted to be out in nature because I felt so free when I was out there. So I made that comment to a friend and he said, ‘Why don’t you try to hike the Appalachian Trail or something before you go live in Alaska’? And I said okay, I’ll hike it.”

“I wanted to make it for a purpose,” Noonan continues. “That’s where Eyes Opened Outdoors was born, giving reason behind my hiking and trying to spread mental health awareness. That’s how I came up with the name, too. My eyes were opened to the therapeutic properties the outdoors had to offer.”

“When you can ground yourself and become a part of nature, it’s one of those things that just releases endorphins. At least for me it does,” he says. “Like when you sit next to a river and can hear water rolling or listening to the wind blow through the trees, the birds chirping, there’s life all around you, you gotta be thankful for what you have. It humbles me and makes me a much more thankful person, and I’m thankful that it makes me thankful.”

According to an article by the American Psychological Association, Noonan’s theory about nature’s positive effect on his mind and emotional state could be useful to others.

“In a review of the research, Gregory Bratman, PhD, an assistant professor at the University of Washington, and colleagues shared evidence that contact with nature is associated with increases in happiness, subjective well-being, positive affect, positive social interactions and a sense of meaning and purpose in life, as well as decreases in mental distress,” the article, published in April 2020, says.

Noonan’s networking and social media presence have not only afforded him followers, but also a sponsorship from local outfitters Roads Rivers and Trails. Co-owner Bryan Wolf supported Noonan even before he started the Appalachian Trail, offering advice and gear.

Wolf says he immediately wanted to work with Noonan after learning about his purpose and drive.

“I have the utmost faith that he can succeed (on the trail),” Wolf says. “He’s a driven and confident person. He knows he can do it and doesn’t want to let himself give up. I don’t know how many times he told me it’s going to take a serious injury to force him off this trail, and when he says it, you totally believe it. It’s just who he is and what he’s capable of.” Wolf introduced Noonan to Joe Solomon, who kayaked the Mississippi River last year to raise awareness for mental health awareness and stigma. Noonan picked Solomon up from the river in Louisiana, where a hurricane cut his trip short. Noonan happened to be traveling on a job, transporting generators to New Orleans, where he met Solomon. Their friendship was virtual until that point, with Noonan talking to Solomon during his kayaking trip regularly.

Solomon decided to join Noonan on the Appalachian Trail’s approach trail in Georgia and a few miles beyond, which Solomon says includes a staircase adjacent to a waterfall with at least 700 steps — an intimidating initial climb.

Noonan and Solomon hope to collaborate in the future, an idea that came naturally because of their shared focus on mental health — something called “surf and turf,” Solomon jokes, because he is a kayaker and Noonan is a hiker (Solomon plans to start the remainder of his Mississippi River trip in May).

Many people who have experienced parts of the Appalachian Trail will mention “trail magic,” a phenomenon that even The Appalachian Trail Conservancy recognizes. Trail magic is defined on the organization’s website as finding what you need when you least expect it, grand acts of generosity from fellow hikers or rare and extraordinary natural occurrences.

Noonan says he was blessed by trail magic before he started his journey, when Wolf introduced him to Solomon. But one of the most impressive examples so far, he says, was camping next to a couple and finding out that the woman was a mental health professional, who also is on the trail to raise awareness for mental health. She granted him his trail name — a common practice of renaming oneself with a title that matches your trail identity — and is now part of his “tramly” (trail family).

The woman dubbed Noonan “Mind Well.” Noonan says it’s now interchangeable with his given name, and he’ll carry it proudly on the rest of his hike and in his journey to develop Eyes Opened Outdoors into an official non-profit. When he eventually returns home, Noonan plans on flipping a school bus that he purchased into a traveling office and home that will take him around the country to further benefit his mission.

“I’ve been through the swamps. I’ve been in some dark places,” Noonan says. “If I can just help one person not be in the place I was, then I’ve done something great.”