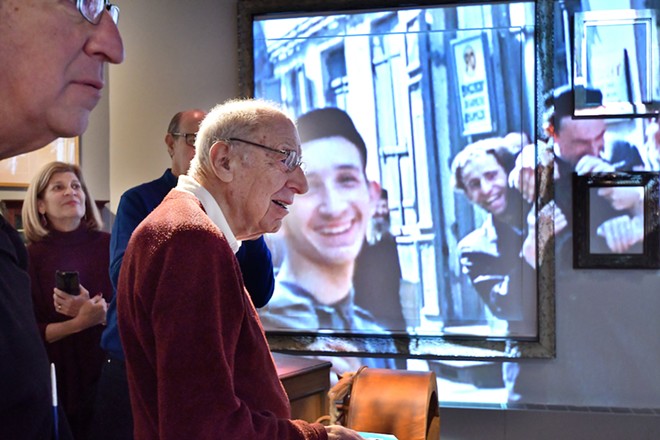 A 99-year-old Holocaust survivor and United States Army veteran is loaning his “Eisenhower jacket” – part of his uniform during World War II – to be displayed in the Nancy & David Wolf Holocaust & Humanity Center at Union Terminal.

Dr. Al Miller escaped Nazi Germany with his family and arrived in the U.S. in 1940. In 1943, he joined the Army, where he was trained in military intelligence with the 3rd Infantry Division. Miller returned to Germany where he was able to use his German language skills to interrogate suspected war criminals for post-war trials.

During the war, General Dwight Eisenhower did not like the original uniform, saying it was restrictive and bad for combat. He wanted the jacket to be “very short, very comfortable, and very natty looking.” That was the start of the “Ike jacket,” which became standard issue for U.S. troops in November 1944.

Miller’s “Ike jacket” will be on display for a limited time. A ribbon-cutting ceremony to unveil the new artifact installation featuring the jacket will be held Wednesday, Nov. 16 at noon.

The unveiling comes just days before Miller’s 100th birthday, the Nancy & David Wolf Holocaust & Humanity Center said in a press release. They will hold a birthday celebration for him at Union Terminal on Sunday, Nov. 20.

“In conversation with former Chief Executive Officer Sarah Weiss, Miller will share his story and his advice and reflections on living a fulfilling and meaningful life,” according to the release. That conversation will be held at 4:30 p.m. in Reakirt Auditorium, followed by a reception with cake and refreshments in the Union Terminal rotunda.