For the 2021 season, the Dragons will move from Low-A to High-A — a change from the Dragons’ first 20 years of operations. 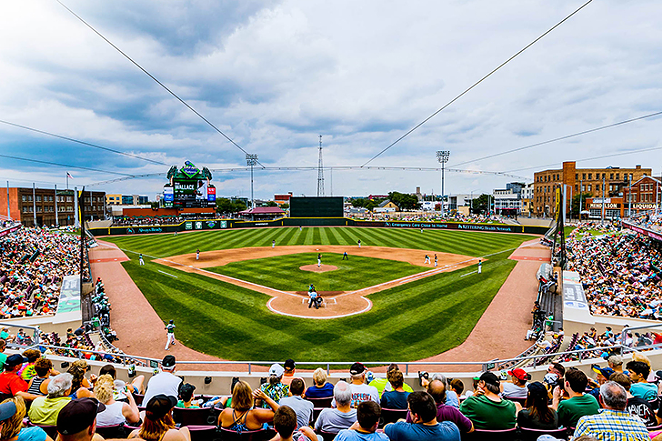 Get ready, Dayton Dragons fans — the Cincinnati Reds say it’s time for the minor-league team to move on up.

On Feb. 15, the teams announced a new Major League Baseball Player Development License agreement that will keep the Dragons affiliated with the Reds organization for the next 10 years. That links the two clubs until 2030.

“The Dayton Dragons organization is thrilled to continue to partner with the Cincinnati Reds,” Dragons team president Robert Murphy says in a release. “We are very proud of what has been a great relationship with Reds ownership and their Baseball Operations staff. More than 100 Dragons players have played in the Major Leagues including Reds generational favorites like Joey Votto, Adam Dunn, Jay Bruce, Todd Frazier, and Johnny Cueto, and many of today’s Reds players like Jesse Winker, Nick Senzel, Amir Garrett, and Tucker Barnhart. The opportunity to move up to the High A level will be an exciting change for our fans.”

“We couldn’t be happier to have the opportunity to continue our relationship with Dayton,” adds Reds vice president and general manager Nick Krall. “It is well known within the game that the Dragons’ front office provides some of the best experiences in baseball for not only our players, but for visiting players and their Southwest Ohio fan base. For more than 20 years, they have been an important part in the development of Reds Major Leaguers, both on the field and in our communities.”

Due to the ongoing coronavirus pandemic, the Dayton Dragons have not yet announced its 2021 schedule or fan expectations for Day Air Ballpark in Dayton.

The Cincinnati Reds will play the 2021 home opener on April 1 at Great American Ballpark.