FILM REVIEW: 'Hereditary' Is a Hot Box of Horror 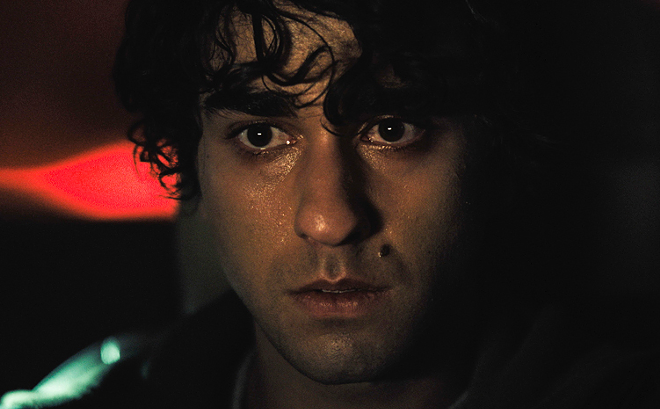 PHOTO: Courtesy of A24
Alex Wolff sees the nightmares to come.

The slow burn leaves the harshest scars on a family.

The so-called nuclear family — two opposite-sex parents and two children, usually one boy and one girl — is the textbook definition of what a “family” looks like (being white is, of course, a given as well). So when we think of what has the potential to frighten us the most, we are most likely drawn to scenes that disrupt this dynamic and place it and/or its individual components in peril. Fear takes root in any scenario that could harm this picture-perfect clan.

But what if that family isn’t as pristine a model as we might expect? What happens when the family members come rife with eccentricities and frayed edges? Hereditary, a new horror film and the first feature from writer-director Ari Aster, probes that “what if.”

With examples like You’re Next, The Babadook, The Witch and now this, a new breed of indie horror films has emerged that challenges our image of the perfect family — positing a new assumption that no family is perfect in the first place. On an even more fundamental level, these films realize how much more terrifying the scares can be if you push these already flawed folks even further off course.

The story concerns the aftermath of the death of a matriarch and the effect it has on her adult daughter, Annie Graham (Toni Collette), and her family. It seems she left secrets behind about their past — secrets that threaten Annie, her husband Steve (Gabriel Byrne) and the children.

Annie is a talented artist, and Hereditary quickly introduces us to her mini-tableau installations. Aster offers up an early example of one of these almost shoebox-styled artworks, with its eerily minute details of a room in a house that looks wholesome, but we feel that creeping sensation as the camera zooms in closer.

The director’s background is in short films and he has learned how to connote intimacy with his concision and framing, which here veers toward off-kilter perspectives and discomforting interactions. We recognize that something, more than likely everything, is off but we don’t know when we will come face to face with the revelation of what it is.

That established, the narrative next grounds us in the specifics of the morning of the funeral for Annie’s mother. Steve sympathetically makes his way through the house, ensuring that everyone is getting ready. He drops off a dark suit in the bedroom of their teenage son Peter (Alex Wolff), and gets a bit frazzled as he searches for daughter Charlie (Milly Shapiro). It turns out she has slept on the floor in the cold attic. Steve is obviously kind, but too calm, too in charge.

We know there’s something rotten beneath the façade, where the tableau will become a hot box of horror, but the temperature doesn’t rise immediately. The metaphoric stove, in this case, has just been turned on, so it’s not hot to the touch. There’s no reason to jerk your hand back yet. You can’t feel anything. But you will.

Aster uses his cast to alert his audience to the game he’s playing. Collette is no classically put-together mom. We know from The Sixth Sense that she’s a step or two in the shadows. Shapiro looks like a younger, alternative version of Collette, someone that has already surrendered to the clouds eagerly awaiting to descend on her. Wolff, recently seen in Jumanji: Welcome to the Jungle, comes close to conveying conventionality, with his dark features and perpetual smirk. But his geeky charm from that film has faded; he looks like someone ready to get lost in nightmares to come.

Things start happening that call into question the possibility of supernatural or otherworldly forces at play with the Grahams. There is some kind of inherited disorder, a lethal birthmark signaling the opposite of innocence or grace.

Hereditary turns up the heat incrementally, but even when the frames erupt in flames, the hellfire cools as if waiting for an additional opportunity to scorch yet another layer of flesh. The Grahams — and the audience for the new breed of indie horror films — are caught in the grip of unspeakable evil. (Opens Friday) (R) Grade: A