The ideas that germinate within the film resonate profoundly in the age of Colin Kaepernick. 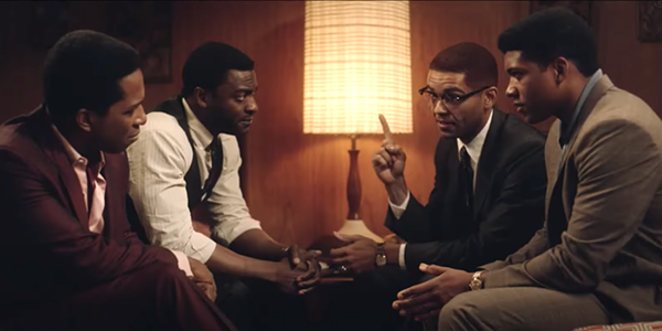 One Night in Miami, the directorial debut from Oscar-winning actor Regina King, is a vivacious movie of ideas. Based on the stage play by Kemp Powers, it imagines a gathering of four of the 1960's most famous and controversial Black men.

After Cassius Clay (Eli Goree) defeats Sonny Liston to claim the world heavyweight title on February 25, 1964, he is joined by Malcolm X (Ben Kingsley-Adir), Sam Cooke (Leslie Odom, Jr.) and Jim Brown (Aldis Hodge), at a nearby motel for what they assume will be a festive after party.

“I was hoping to get some pussy tonight,” Jim Brown mourns, when he intuits that the evening appears to be on a different course.

Indeed. The meeting is an opportunity, staged by Malcolm X, for these towering figures of the era to discuss the Civil Rights Movement and their place within it. Each of the four men arrive at the hotel on the cusp of pivotal moments in their lives: Clay’s public conversion to Islam, Brown’s transition from the NFL to Hollywood, Sam Cooke’s exploration of more mission-driven songwriting, and Malcolm X’s schism with the Nation of Islam. Some of them have secrets. Some of them have agendas. All of them, they recognize, have enormous platforms and power.

The central dispute is between Malcolm X and Cooke, who are also the script’s most fully realized characters. (Ben-Adir and Odom should therefore be frontrunners among the ensemble for awards consideration.) Their protracted argument about the tactics by which Black celebrity should be marshaled in the service of social justice is the ideological lynchpin of the film. Their arc, including a climactic shouting match, a late flashback, and an emotive coda courtesy of Odom, is the film’s most satisfying. At times, Clay and Brown can seem almost incidental.

For better or worse, this fictional account is a stage play adapted for the cinema. (The four men really were friends and did get together on that night in Miami, but the script takes dramatic liberties with the setting, the timeline of the surrounding events and, naturally, the exact conversations.) King stretches the material with occasional scene shifts, but the strength and weakness of the movie is its dialogue. It would be ruined without effective performers who are able to channel the physical presence of the figures they are called to impersonate without drifting into caricature. Clay was only 22 at the time of the first Liston fight, for example, and Goree plays him with boyish bravado, which feels true to the nature of a young man sincere in his commitments, but also uncertain in his methods.

The visual presentation of the story – the production design, costuming, lighting – creates a rich period-accurate atmosphere that emphasizes the paranoia of outspoken dissidents in an era of FBI surveillance and routine violence against Black people. It also evokes the claustrophobia of both the stage and the ring. As the men roam around their tiny hotel room, bantering and debating, they are all like boxers, ducking and feinting and trying to land knockout blows.

The theatricality of the script, and its fan-fictional premise, can sometimes feel more like a thought exercise than a narrative. But these thoughts are important, and the ideas that germinate resonate profoundly in the age of Colin Kaepernick. King’s movie is a sterling debut by any measure, but one metric that’s hard to quantify is how it may spawn similar conversations among Black performers and athletes of today, whom society continues to instruct to stay in their lane, to “shut up and dribble.”