New exhibitions director Matt Distel’s first big show at The Carnegie gallery in Covington, Ky., which opened last week, is important in its own right as well as for what it says about Distel’s curatorial desires for the institution. 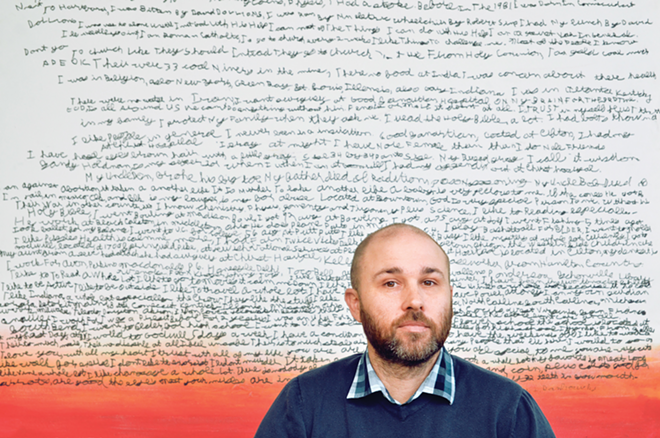 New exhibitions director Matt Distel’s first big show at The Carnegie gallery in Covington, Ky., which opened last week, is important in its own right as well as for what it says about Distel’s curatorial desires for the institution.

The 26-work show, Take It From Me, is the first major retrospective for the late Cincinnati artist Ron Thomas, who died in 2009. And if the name isn’t familiar to you, it wasn’t to Distel, either. But he was impressed by the paintings — carefully geometric in their depictions and, sometimes, in their very shapes and also infused with a mystical dimension.

“The more you dig into it, there’s a lot more at play,” Distel says. “It seems deeply personal even though it at times feels highly mathematical, structured and programmatic. And it veers off into these spiritual or mandala patterns that get really interesting and strike me as very un-Op Art-like.” (In Eastern religions, a mandala is a symbol that represents the universe.)

The show came about not through a traditional call for proposals but in a much more personal way. It started after Distel — a longtime curator at public and private spaces as well as former executive director at Visionaries + Voices and current adjunct contemporary curator at Cincinnati Art Museum — was announced for The Carnegie job.

A local arts activist/photographer/photography curator, William Messer, called him up. “He said he had an old friend who had passed away in 2009 and (Thomas’) stepdaughter had reached out to Bill and said, ‘My mom told me you once told Ron his work was very good and deserved to be in museums.’ That comment had held in her mind,” Distel says.

That stepdaughter, Michele Blevens, called because her mom, Rachael Bilbrey Cason, was ill. (She died in June.) “When her mom’s health started failing, she didn’t know what to do with the work,” Distel says. “So they tracked down Bill based on that comment and he called me and said, ‘I think the work is good and you might be open to looking.’”

“I went to this house on the West Side and there were some amazing paintings hanging on the walls. The more I dug through, the more I thought this needs to see the light of day.”

Besides Messer and Blevens, Thomas’ daughter from a marriage to Carolyn Toelle — Susannah Castro — also helped with the show. Distel is quick to add that Thomas was not an unknown. A DAAP grad who was a nationally successful professional graphic artist, he had a very colorful and interesting life in Cincinnati.

At one time, he and partner Cason had a food store/commune in Mount Adams. He did have a show at the old Base Gallery co-op in Over-the-Rhine and had his own Studio 3 on Main Street there too, where he did many large paintings and photo collages.

The show will be up through Feb. 14 in the large first-floor gallery. At the same time, five other new exhibitions are being offered in upstairs spaces: Northern Kentucky Printmakers’ So They Say: Wisdom and Foolishness; Andrew Dailey’s Genus Machina; Trish Weeks’ Speaking of Color; works by David Hartz; and, in the Youth Gallery, paintings by Rachel Birrer. That last one is a high-school student at Kentucky Center Governor’s School for the Arts in Lexington, and she will feature several paintings of horses in which she uses riding crops for brushes.

In the future, look for more shows where Distel is very active in seeking artists. “Ron Thomas does signal what I’m after here,” he says. “For so long, The Carnegie has organized its shows through a call to artists — and that is an effective way to have The Carnegie seem accessible to artists. I think there are other ways to go about that, too, which I am excited to explore. That includes getting out and going into as many studios as possible, utilizing networks I’ve already built.”

“I didn’t know (Thomas’) work prior,” he continues, “and he’s somebody I think has been kind of overlooked. It’s not like I discovered him, but I think the fact he’s having his first survey four years after he passed suggests there are artisans in the area who have full, completely realized bodies of work who maybe haven’t been as visible as could be. That’s an exciting niche for me to fill.”