NFL Sets Penalties for COVID-19 Outbreaks Within All Franchises, Including Cincinnati Bengals

The NFL's crackdown comes as Ohio and Kentucky are reporting an increase in COVID-19 cases, largely driven by those who are unvaccinated. 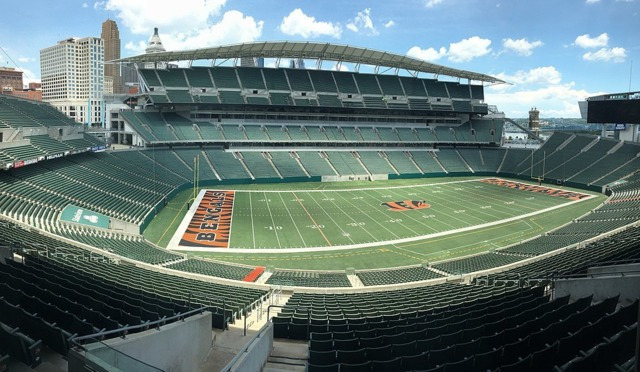 The National Football League has a message for its players: Get vaccinated.

On Thursday, the NFL reportedly issued a memo announcing new consequences that teams would face if a COVID-19 outbreak would occur among unvaccinated players. The penalties would apply to all teams within the league, including the Cincinnati Bengals.

If a coronavirus outbreak were severe enough to cancel a game, a team may reschedule a game within the season. But the NFL said that if rescheduling within the 18-week season isn't an option, the team with the COVID-19 outbreak would forfeit and be credited with a loss, according to Tom Pelissero, a reporter with the NFL Network.

Moreover, the NFL will not extend the season to accommodate rescheduled games, the NFL said.

"We do not anticipate adding a '19th week' to accommodate games that cannot be rescheduled within the current 18 weeks of the regular season," Pelissero reported the NFL's memo as saying. In 2020, the league frequently rescheduled games as outbreaks were confirmed.

The NFL's memo added that teams with COVID-19 outbreaks would be responsible for financial losses and could be subject to further penalties by NFL commissioner Roger Goodell.

Pelissero also reported that the NFL was being obvious about its support for COVID-19 vaccines.

"We know that vaccines are safe and effective and are the best step anyone can take to be safe from the coronavirus. The vaccines continue to provide strong immunity against variants of the coronavirus, including the Delta variant," Pelissero reported the NFL's memo as saying.

CityBeat has reached out to the Cincinnati Bengals for comment.

The NFL's crackdown on unvaccinated players comes as Ohio and Kentucky are reporting an increase in COVID-19 cases largely driven by those who are unvaccinated. Earlier this year, the Cincinnati Bengals held a massive COVID-19 vaccination event at Paul Brown Stadium downtown as part of the NFL's league-wide efforts to increase vaccination rates.

Dr. Bruce Vanderhoff, the medical director for the Ohio Department of Health, said this week that COVID-19 cases within Ohio have doubled over the past few weeks and that the Delta variant is becoming more prevalent.

As of the end of last week, only 48% of Ohioans had received at least one shot of a COVID-19 vaccine. Vaccination rates vary widely by county, with Delaware County leading the pack at 62% vaxed and Holmes County coming in dead last at just 15%.

In Kentucky, Gov. Andy Beshear said this week that younger residents are increasingly getting the Delta variant, largely because they are the ones who are less likely to have been vaccinated. Because vaccine administration for all age groups has plateaued, Delta has risen quickly in Kentucky and other nearby states — three straight weeks of steep case and hospitalization increases, Beshear said.

Scientists say that Delta is much more contagious than the original version of the virus or its previous mutations because of the heavier viral load within the breath that expels from an infected person's mouth, said Fr. Steven Stack, commissioner of the Kentucky Department for Public Health. Researchers have reported that people infected with the Delta variant have up to 1,000 times more virus than others, presenting great risk to others when talking or sneezing, especially indoors.

Read Pelissero's full rundown of the NFL's memo on Twitter.