NKU’s YES Festival at a Glance

The Black Boy In Pink

This year’s festival features a rare production by a current NKU student. A BFA playwright major, Isaiah Reaves’ work has been seen locally at the Cincinnati Fringe Festival and as part of the Know Theatre’s Serials.

Set in Cincinnati in 1959, his new play, The Black Boy in Pink, follows the struggles and resilience of Wyatt Frost, a young black man forced into prostitution to survive. Wyatt wears a pair of bright pink silky lace undergarments throughout the show. As his story becomes tangled with that of a well-established and wealthy Cincinnati family, Wyatt begins to dream of what else might be possible for him. Lonely, he prays to God — whom he calls “sister” — for the strength to confront hatred and bigotry and step out into the greater life he dreams of and deserves.

Often, the play’s tempo drags, snuffing the fire and danger out of the story, but the new work benefits from strong design and an appealingly unromantic space. The Henry Konstantinow Studio Theatre is small — more stage than house — and throughout the show the audience has the feeling of being in Wyatt’s room. When Wyatt looks in the mirror to fix his lipstick, he is looking straight into the seats. The raw studio space is a strong fit for the story; the show’s lighting and sound design easily create a quiet, moody atmosphere. The cast has a strong understanding of their role in the story and executed it well. Je’Shaun Jackson’s hopeful, soft-spoken Wyatt collides with Nathaniel Clifford’s blustering, clueless Douglas. Meanwhile, Douglas’ high-strung wife, conniving little brother and dissatisfied housekeeper set traps for the pair as the voice of Wyatt’s faceless mother frets over his future. In an exploration of love and rage, Reaves’ script includes spooky, baked-in theatricality that unites this variety of voices. — Harper Lee 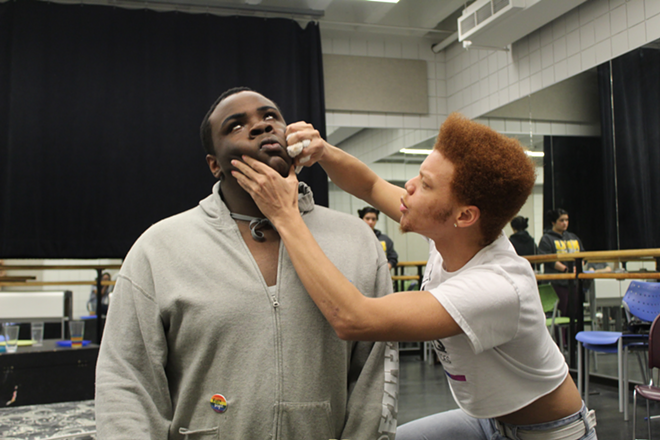 Josh Kelly
Rehearsal photos of "The Black Boy in Pink"

Written by Kentucky native Jacob York, Initiative follows the story of 20-something Dave, who feels that his entire life is stretching out in front of him. He has best friends and a happy relationship with his spunky and supportive girlfriend, Meg. The world should be his oyster. But Dave, played by an affable Brandon Critchfield, discovers he has an aggressive form of cancer and his comfortable life is thrown into a tailspin by a bleak prognosis. Dave and his friends enlist their favorite tabletop role-playing game Dungeons & Dragons to help Dave live as much as possible before the end.

The show is at its very best when it is fully embracing the geeky awesomeness of D&D. Dave’s friends Benny (Trevor Browning), Tyrone (James Dawson) and Sky (Kali Marsh) introduce Meg (Piper Bates) to their love of the game. The warmth and connection created among the group as they gather around the table is truly engaging and, at times, very funny. Produced on the thrust stage in NKU’s Stauss Theatre, the play’s relationships and dialogue are muted by the deep stage, low-energy direction and bland set. The performers have a clear affection for the work, which surfaces through the show’s core themes: deep love among friends, loss and high-speed memory making. But the audience should feel the pressure of the play’s stakes: If Dave doesn’t have these experiences now — even while angry and nauseous from chemo — he won’t have them at all. The clock is ticking. And yet the drama loses its focus and veers into angsty maudlin territory.

Initiative struggles to hold tension and energy, but possesses an intriguing premise and a committed cast with a big warm heart for the work. Together, the group sends Dave to the ocean and even to graduate school as he fights the monsters in his body, in his mind and in the game. — HL Set in the Golden Age of Hollywood, the debut of Fast Young Beautiful — written by Ethan Warren — explores what it means to be a great talent and a good man through the lens of two foils: Dennis, a young Hollywood hopeful, shows promise as a new up-and-comer in the film scene, and James Dean, the established, tortured performer with a troubled past and a penchant for fast driving.

Dennis has already won a solid contract with a big-name studio and is eager to prove that he is just as good as any other big-name actor. As he sets out to explore what it means to be an actor worthy of the accolades that are bestowed upon the premiere stars of the era, Dennis meets Dean. Though at first skeptical — and a bit jealous of Dean’s renown and respect — Dennis soon ushers himself under Dean’s wing, desperate to soak up some of his big-star magic.

But Dean has some of his own problems to tackle first; he throws himself into every role he takes so deeply that he rarely makes it out unscathed. As the young men work alongside each other on famous films Rebel Without a Cause and Giant, they come to understand that youthful insurrection and disillusionment can only be harnessed for so long. To thrive in their chosen passions, they have to understand how to balance their own complexities of character.

Though Fast Young Beautiful takes a unique look at how an artist separates themselves from their art, the play spends too much time lingering in reverence of Old Hollywood to fully accomplish its goal. Because of this, Fast Young Beautiful ends up being a fan-based imagination of the classic era in pop culture rather than a nostalgic, tongue-in-cheek look at the dichotomy between big-name figures like Elizabeth Taylor and Rock Hudson and tortured artists like James Dean.

Charles Adams and Landis Helwig — who play Dennis and Dean, respectively — both give commanding and entertaining performances. — Jackie Mulay