Two Swedes (Rapace, Joel Kinnaman) star in the 1950s kipnap-and-torture knockoff "The Secrets We Keep," which opens this week in select theaters and on demand in October 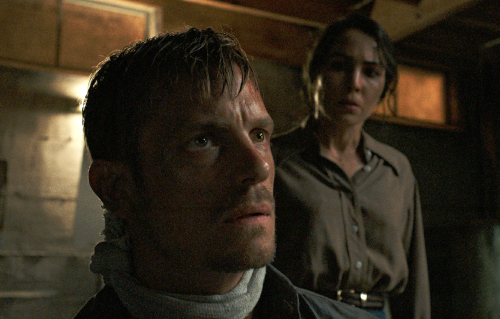 Photo: Bleeker Street
Joel Kinnaman and Noomi Rapace in The Secrets We Keep

Two Swedes star in the 1950s kipnap-and-torture knockoff The Secrets We Keep, which opens this week at select theaters (and on demand Oct. 16). Noomi Rapace, (alum of the original Girl with the Dragon Tattoo franchise, Amazon's Jack Ryan and Prometheus), plays Maja, a Romanian woman living with her husband and son in small-town USA, who seeks vengeance on a man (Robocop's , ) she believes was responsible for atrocities during WWII.

Early in the film, Maja spots him while playing with her son in a park. But she's dislodged. It can't be him. This was a man who belonged to a Nazi unit that terrorized her, her sister and a band of Roma one night many years ago. It was a miracle Maja survived and made it to Greece, where she met her husband, Lewis (Chris Messina). How could this awful man wind up in the same town as she, halfway around the world?

But she's convinced. The memories of his face still haunt her, and she follows him home one day to get a clearer glimpse, to be sure. Maja hasn't shared her life's most painful episode with her husband, and so when she kidnaps the man, ties him up and brings him home in the trunk of her car after deciding against a summary execution, Lewis is justifiably concerned.

Maja has a spotty mental history — her post-war years were marked by sleeplessness, nightmares and psychiatric therapy — and the central question of the film is whether the man tied up in the basement is indeed the man she thinks he is. He insists through increasingly violent interrogations that he is a Swiss national named Thomas who was a clerk during the war. He even tries to enlist Lewis' sympathies. But Maja is certain he's lying. (And the audience will almost surely side with her interpretation, if not always her methods.)

She wants the man to confess to his crimes, and when he won't, she attempts to befriend his wife (Amy Seimitz), who's worried sick over her missing husband, in order to extract intel. Her original goal — getting a confession from Thomas — gains a subsidiary one: proving to Lewis she's not crazy.

The Secrets We Keep will remind older viewers of the 1994 Roman Polanski film Death and the Maiden — the story is identical — but it also recalls 2013's Prisoners, the Hugh Jackman-Paul Dano drama in which a man captures a suspect and tortures him at excruciating length to get info on his missing daughter. I also couldn't help thinking of the Henry Gale episode cycle in Season 2 of LOST, in which the show's villain, Benjamin Linus, tries for days to convince his captors that he is merely a shipwrecked balloonist.

Questions of identity and moral certitude vex all these scripts, and in this way The Secrets We Keep covers very little new narrative ground. One recurring trouble with Secrets We Keep, in spite of creditable performances from both Rapace and Messina, is the constant clash of solemnity and exploitation absurdity. Despite the weighty themes and Holocaust flashbacks, the situation it presents is simply ridiculous. In one goofy scene, the local sheriff, a neighbor and Thomas' wife pop in to ask Maja a few questions about the missing person while Lewis is downstairs shouting back and forth with Thomas. The sheriff at one point sort of looks around, thinking he hears something, but otherwise they're all clueless.

The sets are ably decorated to approximate late 1950s interiors and exteriors, (1959's North by Northwest is on the marquee of the local cinema, a subtle nod to mistaken identity themes?), and the camera work is assured. But the script is what's holding this familiar thriller back. Director and co-writer Yuval Adler didn't bother to inject external circumstance which might have complicated the kidnapping or ratcheted up the stakes.

So beyond getting an answer to the big question — Is it him or isn't it? — there's just not much doing.