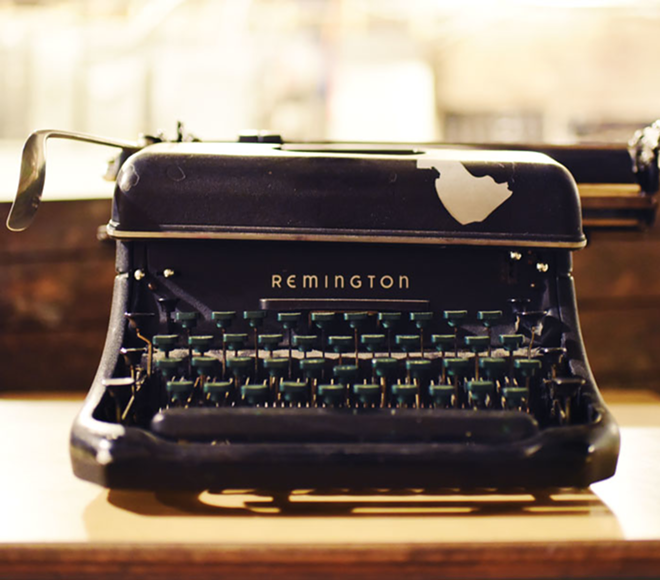 NaNoWriMo challenges participants to write a 50,000-word novel during the month of November.

omeone used to show up with a typewriter,” says Diana McDonough, one of 15 people gathered around a table at Price Hill’s BLOC Coffee Company on Nov. 1 to kick off National Novel Writing Month (known as NaNoWriMo by its participants). Members of the group were from as far away as Oxford, Ohio, and Northern Kentucky, and ranged in age from late teens to early seventies. All of them planned to write a 50,000-word novel by NaNoWriMo’s deadline of 11:59 p.m. Nov. 30.

Write-ins are the weekly or bi-weekly events in venues like coffee shops around Greater Cincinnati that give NaNoWriMo participants a chance to write together. Other than the typewriter year — when the clacking of the machine got on her nerves, so she didn’t attend any more write-ins — McDonough’s experiences as a participant in Cincinnati’s NaNoWriMo community have been positive; in eight years, she’s finished a novel twice in the allotted time.

“It was liberating just to get started and do it [my first year],” she says. “The write-ins can help keep me accountable.”

Accompanying McDonough at the event were her college-aged daughter Elizabeth and her high school-aged son Alex, who were both writing novels of their own. Elizabeth first participated in NaNoWriMo during middle school, and wrote 50,000 words by her sophomore year of high school. Alex hadn’t attempted a novel before, but a recent birthday gift of a small laptop prompted him to start one this year.

“I’m probably going to write a sci-fi novel,” he says.

Multiple participants around the table said that they would be writing sci-fi or fantasy novels, and on the nanowrimo.org page for the Greater Cincinnati NaNoWriMo community, “Stepping up to the podium” (which includes more than 30 people), those two genres dominated, along with romance and fan-fiction. The regional write-in and online community are both supported by the larger NaNoWriMo entity, a nonprofit that launched in 1999 with the goal of helping “children and adults find the inspiration, encouragement and structure they need to achieve their creative potential,” according to their mission statement.

Timothy O’Riley is the “ML,” or Municipal Liaison, for Greater Cincinnati’s NaNoWriMo community. He sat at the head of the table in BLOC and periodically interrupted the writing to give away a poster or motivational postcard from the nonprofit. In addition to handing out promotional materials, O’Riley also maintains a prominent presence on the online site and facilitates most of the write-ins. He has been the ML for two years, and has participated in NaNoWriMo for 12 years.

He resists taking an assertive role in his volunteer position. “I think write-ins tend to take on the personality of the ML, so our write-ins are really informal,” O’Riley says.

A week after the original meeting, Andrew Adkins, who has completed a novel twice in the past five years, said that, similar to McDonough, the write-ins help keep him accountable.

“I do socialize some, I do get to see people that I haven’t seen since last year, like [O’ Riley],” Adkins says. “But sooner or later, I put in my headphones … [and] resolve not to leave until I hit my quota.”

By the third week of November, Adkins had written more than 30,000 words. He studies computer science at Cincinnati State, and plans to become a technical writer, so he justifies his massive commitment to NaNoWriMo as good practice for his future career.

“Some people in the month, they don’t edit at all,” he says. “I always try to make it, maybe not good, but it does have to be grammatically correct, since I plan on doing this for a living.”

Kevin Fleischmann, a middle-school English teacher from Mount Washington who attended the Nov. 1 write-in, has also found ways to integrate his livelihood with NaNoWriMo. Fleischmann first used the nonprofit’s Young Writers Program in his classroom last year. The program offers lesson plans and a teenager oriented online forum to set writing goals and give students a chance to interact with writers from classrooms across the country.

This year, Fleischmann is writing his own novel along with his students. He wrote 35,000 words by the third week of November and calls the process “addictive.” His book imagines William Shakespeare as a time-traveling 14-year-old whose adventures inform the adult Shakespeare’s plays.

“This sounds kind of grandiose, but I wonder if I could use this [novel] to get sixth and seventh graders interested in Shakespeare,” Fleischmann says. “When my students in high school come back to visit me, they’re getting housed by Shakespeare. Just knowing the basic plot would help.”

Fleischmann believes that his own interest in his novel has excited many of his students, who ask for his word count at the beginning of each day and participate in a writing club after school twice a week. More than 40 students have attended the club.

“It’s so different than mainstream teaching,” Fleischmann says. “You can create fake authentic items all the time in your classroom [to get students to write] but ... we made a book made up of excerpts from all of their pieces of writing that they polish up, and put it on the shelf of the school library.”

Fleischmann’s passion for teaching appears in both his own novel and the work of his students. Adkins loves finding new music, new coffee shops and practicing for his future career. The McDonough family members love sharing their novels with each other. NaNoWriMo participants in Cincinnati may not end up publishing their novels, but like many authentic artistic experiences shared with family, students or strangers, the benefits of NaNoWriMo lie in the process, not the product. ©