Ohio Ranks No. 10 in the Nation for States That Use the Most Fireworks on the Fourth of July

According to a career search website called Zippia so, you know, it's true

There’s nothing quite like sipping on an ice cold grape soda and eating a hot dog that’s probably definitely overcooked. It’s even better to do that outside on July 4 while shooting off fireworks that may or may not have been smuggled in from Indiana, enjoying a romantic evening with showers of kisses from mosquitos.

In total, Ohio ranks 10th in the nation for firework imports per capita, according to a study published by Zippia — some kind of career search website — which used that info to extrapolate which states shoot off the most fireworks on the Fourth of July. So feel free to make whatever skeptical facial expression you feel necessary.

Ohio imported 26,514,838 fireworks, second only to Missouri’s 42,283,229 imports. But the issue here is population density. Based on Ohio’s imports per capita, or, how many fireworks each person in the state could shoot off, each human could only blast off 2.3 pyrotechnic marvels.

Ranked by firework imports per capita, Missouri takes first place: each person in the state could shot off 6.9 fireworks. 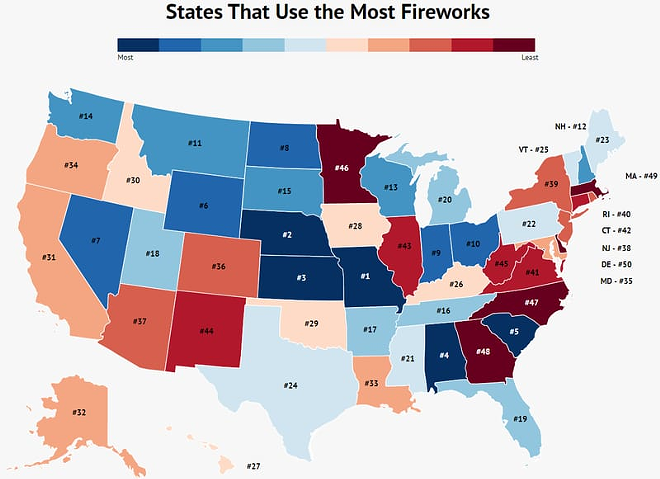 At the bottom of the rankings for both firework imports and imports per capita is Delaware, listed at 0 in both categories.

The U.S. spent about $319 million on firework imports in 2019, and China produces about 90% of all fireworks worldwide, according to the study.

Do you live in Greater Cincinnati? Here’s a list of where you can watch firework shows in the area this year so you don't have to shoot anything off yourself (unless you want to).