Oscar Isaac Discusses His Great Performance in 'Inside Llewyn Davis'

Fitting for a film about a musician, the songs in Inside Llewyn Davis, the new release from the Coen Brothers, sneak inside your head past the images and actions onscreen, which is surprising because those frames have a haunting quality of their o 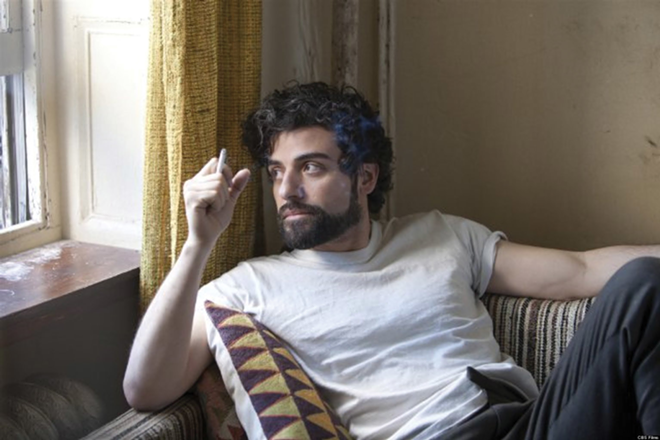 Oscar Isaac in Inside Llewyn Davis

Fitting for a film about a musician, the songs in Inside Llewyn Davis, the new release from the Coen Brothers, sneak inside your head past the images and actions onscreen, which is surprising because those frames have a haunting quality of their own. Take, if you will, a picture of the first time we see Llewyn Davis (Oscar Isaac) onstage. The year is 1961 and he’s playing the iconic Gaslight Café. Obviously a regular on the circuit, Davis, all hunched over his guitar with wispy smoke billowing around him, settles in during his songs like he’s alone in the space. The crowd disappears as soon as he starts picking and plucking on those strings and the woe and quiet desperation of the tunes pours forth from him. The very image seems iconic, exactly what audiences might have dreamed up for themselves, especially those of us too young to have been in Greenwich Village back then.

Having seen the film twice now, I have tried to create a mental snapshot of those seconds before Davis launches into that song, even drawing on past exchanges with the Coens’ longtime storyboard artist J. Todd Anderson, a Dayton, Ohio, native who still lives in the region. Anderson’s sketches have given visual life to almost every film the Coens have made (he met the duo and came on board following their first film, Blood Simple). I dream of seeing Isaac, as Davis, captured in a hand-drawn frame, barely outlined in the darkness. That’s one of the topics I asked Isaac about during a recent phone interview. I wondered if he had seen the storyboard rendering of himself.

“What’s interesting,” Isaac says, “and it’s the first time I’ve ever encountered this on a set, every morning they give you your ‘sides,’ a pamphlet with all your pages that are going to be shot that day, and on the back of those pages, they included the storyboards. So we got the visual idea for the day from those storyboards. That’s the first time I’ve ever seen that, and it was a great indication of just how inclusive [the Coens] are.”

And yet, as powerful a notion as those frames can be, it is the song (and the performance) that remains the ghost in the machine. The song recalls the Ambrose Bierce short story, “An Occurrence at Owl Creek Bridge,” where a man stands on a railroad bridge with his hands tied behind his back, a noose fitted around his neck. When he’s pushed over, down toward the rushing waters below, the rope breaks and he runs, caught up in the swell of extra life, but death hounds him, its hot breath on his neck.

“Hang me, oh hang me, and I’ll be dead and gone,” Isaac sings as Davis, and it is truly Isaac up there singing, not an actor lip-synching to a pre-recorded track. Before acting, Isaac played lead guitar, sang in a band and then studied at Julliard. His voice, much like his body as it assumes the posture of this hustling striver who dreams of making it on his own terms, fills our aural canvas with clear strokes of Davis’ lonely strivings. “I wouldn’t mind the hanging, but the laying in the grave, so long…”

The story of Llewyn Davis comes to mirror “Occurrence,” with Davis coming off the stage after that performance, suffering a humiliating beatdown in a back alley, and then the Coens take us back about a week into Davis’ past, to let us see what led to Davis standing on his precipice with a noose around his neck. He fears the grave, the cold embrace of obscurity; that is his version of death. He’s willing to travel far and wide, sacrifice any semblance of a normal life — all for the chance to make music on his own terms that people will listen to.

Isaac has journeyed around the world of film (coming to the fore recently in Madonna’s W.E. and later as a romantic interest in Won’t Back Down), carrying a solid voice and dark eyes that adoring fans will undoubtedly consider dreamy because they will overlook the steely determination. Telephonic communication removes the distraction of those eyes, which leaves the theatrical focus and the musicality of his voice. It is a subtle and effectively honed instrument.

“In film, the rhythm of a performance is dictated by the editing and the editor, but in theater, you’re your own editor,” Isaac says. “So you dictate the pace. The onus is all on the actor. Growing up in theater, in studying it, you get a sense of rhythm, and adding on to it, the fact that I am musical — I think in those terms. Sometimes I even assign a time signature to my walk.”

Isaac is walking the walk, and thanks to the harmonic blending of sound and vision in Inside Llewyn Davis, we will all be paying much more attention.

INSIDE LLEWYN DAVIS is now in theaters.