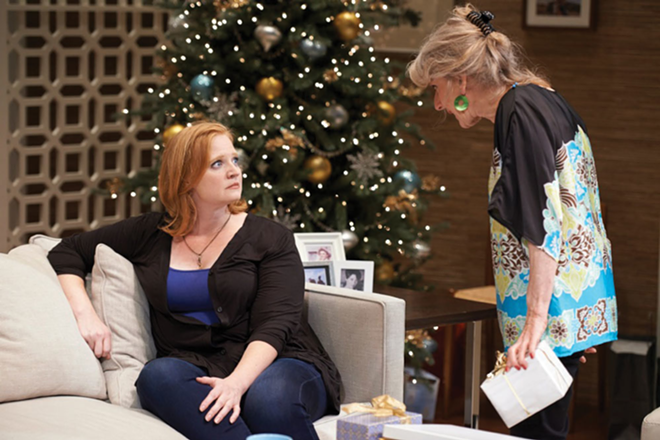 There’s a lot of heat in the desert, but it gets painfully cold at night. So it’s the perfect setting for Jon Robin Baitz’s Pulitzer Prize-nominated Other Desert Cities, opening Ensemble Theatre’s 2013-2014 season. Palm Springs, Calif., is the home of the rich and famous, and it’s where the Wyeth family has dug in, allying with Ron and Nancy Reagan and other prominent conservatives — and former actors. Performing is the Wyeths’ lifeblood.

Parents Polly (Amy Warner) and Lyman (Dennis Parlato) have embraced the politics and the lifestyle; their children, writer Brooke (Sarah Mackie) and TV producer Trip (Ryan Wesley Gilreath) have rejected it, as has Polly’s sister Silda (Dale Hodges), who’s stepped away in a maelstrom of alcoholism and mishaps. So it’s a toxic mix on Christmas Eve 2004 in their designer-chic desert home (Brian Mehring’s set design is spot-on, as usual); the explosion about to shatter a family that’s zealously protected its reputation is Brooke’s memoir about Henry, her beloved brother, a disaffected antiwar activist who disappeared after the 1980s bombing of an army recruitment center that left a man dead. His disappearance and suicide note affected and damaged the family; Brooke climbed out of a bout depression by writing her recollection of the events, and an excerpt is headed for The New Yorker. She thinks it’s tell-all, but as they dig venomously at one another, we discover that her version isn’t the full picture.

Other Desert Cities is a great script for strong actors, and director D. Lynn Meyers has assembled a potent veteran cast. As the sarcastic and angular Polly, Warner channels Nancy Reagan and Who’s Afraid of Virginia Woolf?’s Martha (a role she played at Cincinnati Shakespeare in 2005). Parlato, a New York actor often seen at ETC, is e the restrained, dignified Lyman, with an undercurrent of defensiveness and dread. Hodges plays Silda as a damaged truth-teller, flawed in her view and unrestrained in her judgment. Gilreath brings charm as Trip, who tries to rise above it all, while Mackie’s Brooke blends her father’s sensitivity and her mother’s steel into her own brand of vulnerable righteousness.

The white-hot heat of a family tearing itself apart, the cold fear of submerged emotions spilling forth — these elements fuel this powerful drama.