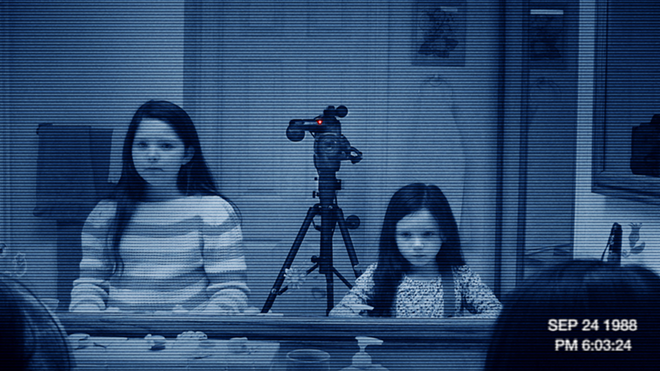 Things go bump in the night and a camera records the deeds — the what of the action, but not exactly the how or the why. We function under the belief that if we can see, if we have visual proof of an occurrence, then that fact means that we can explain it. People die in these largely bloodless (and gore-less) home movies, but the desire to watch never dies down.

The creator behind the phenomenon (Oren Peli) has been able to successfully pass it on to others — first to director Tod Williams (The Door in the Floor) and screenwriters Michael R. Perry (Millennium and The Guardian) and Christopher B. Landon (Disturbia), and now to Henry Joost and Ariel Schulman (of Catfish fame) with Landon returning as screenwriter — with little or no negative return on the creative investment.

This time we jump back in time, to the late-1980s, when Katie (Katie Featherston) and Kristi (Sprague Grayden) are just girls (played by Chloe Csengery and Jessica Tyler Brown respectively), and their parents (Christopher Nicholas Smith and Lauren Bittner) must contend with the bumpty bumps, although this time more effort is made to explain the mystery — and there is a real argument to be made for leaving the unexplained, well, unexplained. The reasons and rationales rarely satisfy either curiosity or logic and, as here, only debunk the fun.

But what fun there is to be had if you see Paranormal Activity 3 with an audience of over-hyped high school and college-aged kids screaming and shouting and talking back to the screen. Even if you can see what is going to happen a mile off, you do so with the person sitting next to you, likely someone you don’t know and you haven’t friended on Facebook. Maybe you will bump into them next year. Grade: B