See "Shakespeare in Love" at the Cincinnati Playhouse and "The Miracle Worker" at the Covedale Center. 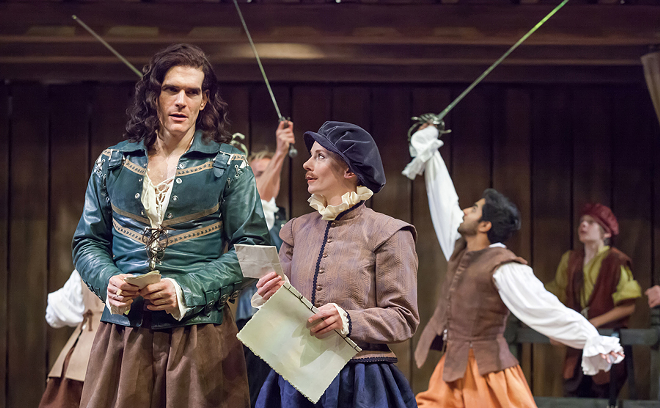 Overcoming obstacles is a common theme onstage; we admire characters who won’t give up. They are central to two season-opening shows, Shakespeare in Love at Cincinnati Playhouse and The Miracle Worker at the Covedale.

The humorous fiction of young Will Shakespeare (Nicholas Carrière) suffering from a serious case of writer’s block is the starting point of an entertaining tale of life and love in Elizabethan England. Shakespeare in Love is based on the Oscar-winning 1998 film, which had a screenplay by Marc Norman and Tom Stoppard; it has been adapted for the stage by Lee Hall.

It’s 1593, and Will is just getting started. He’s short on ideas and unhappy in a loveless marriage. On deadline for commissioned scripts, his Romeo and Ethel, the Pirate’s Daughter seems singularly without promise.

Meanwhile Viola de Lesseps (Emily Trask), a merchant’s daughter enamored of the theater, longs to be onstage, perhaps in a play by Shakespeare. But women are prohibited from performing. Her oppressive suitor Lord Wessex (Michael Brusasco) is after her father’s fortune, while Viola dreams of “real love” rooted in romance and poetry.

The intersection of her and Will’s paths is inevitable, as the play’s title telegraphs. It happens when Viola disguises herself as an aspiring male actor for an audition that captures Will’s attention. He sends an ardent sonnet via “Thomas” to Viola, and their affair is launched. There’s a ton of laughable theater humor along the way, dropping in sly citations of Shakespearean lines and situations, but dashing Carrière and diminutive Trask don’t ignite convincingly. The playwright yearns for inspiration, and she’s hot for romance, but their chemistry seems dictated more by the script than the product of mutual passion: They end up in bed when he unravels her boyish costume, of course, but there’s not much steam.

Wittily staged by the Playhouse’s Blake Robison, Shakespeare in Love succeeds in creating scene after farcical scene that audiences will enjoy whether they’re fans of Shakespeare or not. This is a big, entertaining show with visual appeal: 20-plus actors (including a tiny dog as “Spot” and an amusing portrait of Queen Elizabeth by Naomi Jacobson), gorgeous costumes and a set that conjures up theaters of the period.

Nevertheless, I yearned to be swept away once “Ethel” was replaced by the tragic Juliet — and Shakespeare, inspired by a muse, found his words and his passion. The play concludes with allusions to Twelfth Night, Shakespeare’s romance about Viola, a young woman who dresses as a man and falls in love. The elements are present in Shakespeare in Love, but the fuse never gets lit.

In The Miracle Worker at the Covedale, there’s an explosive struggle of a different sort. William Gibson’s play, which debuted in 1959 and is based on the autobiography of Helen Keller, centers on her as a girl trapped by deafness and blindness yet working with an inexperienced but fiercely motivated young teacher striving to help her. Rebecca Whatley turns in a textured and convincing portrait of plainspoken Annie Sullivan, who achieves the miracle of communication with six-year-old Helen (Brooke Chamberlin). She’s plagued by recollections of her own past while she struggles to overcome Helen’s solicitous family — especially a well-intended mother (Sarah Viola, saddled with an odd-looking wig) and a patronizing father (Brent Alan Burington) — who are weary of battles with angry, never disciplined Helen.

SHAKESPEARE IN LOVE, presented by Cincinnati Playhouse in the Park, continues through Sept. 30. THE MIRACLE WORKER at the Covedale Center for the Performing Arts is onstage through Oct. 1. More info at cincyplay.com and cincinnatilandmarkproductions.com, respectively.