A pair of children-oriented live events that have spawned from television programs (and have a propensity for all caps and liberally-used exclamation points to signify they are LIVE! shows) will be coming to Cincinnati later this year. 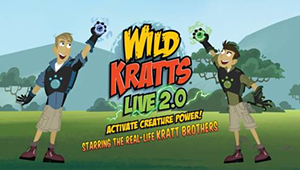 Tickets ($25-$45) go on sale this Friday for the Nov. 23 Aronoff Center stop of the Wild Kratts LIVE 2.0 – Activate Creature Power! tour. The show features Chris and Martin Kratt, whose popular live-action/animated program Wild Kratts is in its sixth season on PBS and PBS Kids.


Here's the description of the Activate Creature Power! live show from the press release:

In Wild Kratts® LIVE 2.0, Chris and Martin take to the stage to activate new Creature Powers and go “off to the creature rescue!” With some help from Aviva and the rest of the Wild Kratts team, who will be animated and on screen at the Tortuga HQ, the brothers confront a comic villain and once again save the day, sharing fascinating tidbits about some of the world’s most amazing creatures along the way.

Tickets go on sale May 3 via ticketmaster.com.

The show — part of the first-ever Trolls tour — is based on the Trolls animated films and TV shows, which in turn are based on those little troll dolls with the colorful poofs of hair.

Here's the Trolls LIVE! description from a press release:

The journey begins when the Trolls' Hug Time is unexpectedly put at risk. Knowing the only way to save it is by doing what the Trolls do best, Poppy hosts a toe-tapping, Trolls-tastic show! Poppy, Branch, Cooper, Cloud Guy, Smidge, Guy Diamond, Fuzzbert, Biggie (and of course Mr. Dinkles) invite you into the colorful world of Trolls Village for this interactive performance only the Trolls can create. This is one Trolls party you won't want to miss!

The world of the Trolls comes alive in this totally interactive, story-rich musical celebration of everything the Trolls love - singing, dancing, rainbows, glitter and plenty of hugs. The extravaganza utilizes the latest in scenic projection, puppetry, media technology and features a host of special effects and interactive surprises. Trolls LIVE! includes two acts with an intermission and will enchant both children and adults with its popular Trolls show-stopping songs, as well as introduce audiences to all-new electrifying Trollsmusic and choreography.