Research and restoration work is ongoing at the historic Ohio site

Archaeologists and historians from the Ohio History Connection — a nonprofit focused on preserving and sharing the Buckeye State's history — have been researching Walnut Hills' Harriet Beecher Stowe House in order to restore the property and, within the last four months, have brought the project to the site's exterior.

The homestead's namesake, famed author and abolitionist Harriet Beecher Stowe, called Cincinnati home in her formative years. She moved here in 1832 at age 21 to live with her father — then the president of the Lane Theological Seminary — and it was her time spent in the Queen City that later contributed to her penning Uncle Tom's Cabin, a greatly influential anti-slavery novel still widely studied today.

Research efforts for restoration have been ongoing since 2016, says Christina Hartlieb, executive director of the Harriet Beecher Stowe House. Up until recently, most of the work focused on the building's interior by way of removing portions of the walls, floors, ceilings and moldings to determine how the home was put together. 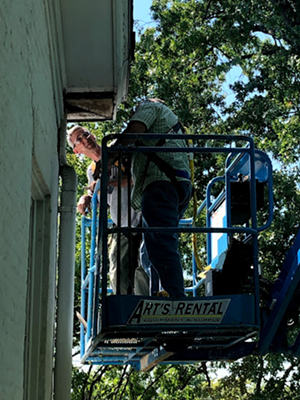 Provided by the Harriet Beecher Stowe House
The house's exterior paint being analyzed.

"Through archaeological digs, ground scanning, paint analysis, and other techniques, they are compiling information about changes made to the house and grounds over the last 187 years," reads a press release. "Through this site investigation process, we are uncovering information that will help us get a fuller picture of what life was like for people who lived in this house from the 1830s all the way into the 1940s. These stories will help determine the scope of the restoration project as it's developing."

The Beechers weren't the only people to call this house a home. In peeling back the layers, researchers have been able to understand multiple timespans of the house's history. The Beecher family resided there in the 1830s and '40s. And by the 1930s, it was an African-American boarding house and tavern.

Hartlieb also points to the front porch, an addition that came in between the Beechers' stay and the boarding house era. Understanding this piece can potentially allow them to convert the porch to what it might have looked like in the Beecher era.

When asked what interesting discoveries they have made thus far, Hartlieb says that when the team conducted a ground-penetrating radar, they were able to discern the outline of what was likely a Beecher-era carriage house underneath their parking lot.

"So it is quite possible that, at some point, they're going to dig up our parking lot and be able to figure out exactly where the carriage house was," Hartlieb says. "It's possible that they may reconstruct that — I don't know for sure. But at least we would know where that was in relation to the house."

Other items of interest include a brick-lined cistern with lead piping leading back to the house, which potentially could be part of Harriet's older sister Catherine's indoor water pump system. (A domestic engineer who wrote on topics like housekeeping, she described this system in her 1841 book.)

Hartlieb says the research process won't slow down. In fact, she says that in the coming months the OHC will be doing foundation work, which is easier when the ground is harder. That will enable them to begin restoration on the exterior. Though not set in stone, Hartlieb says they potentially will begin restoring the interior by next winter.

In part, they're finalizing funding before nailing down a more finite timeline. OHC is submitting a bid for funding from the Ohio Capital Budget and Hartlieb says the Harriet Beecher Stowe House will be fundraising here in Cincinnati, too.