POW! 'Superhero' Saves Us From an Ordinary Summer

You Are My Superhero, opening Sunday at Dayton Art Institute (DAI), is here to rescue art lovers from the summer blahs. The difference starts at the door, where there’s $2 off for wearing a superhero costume. 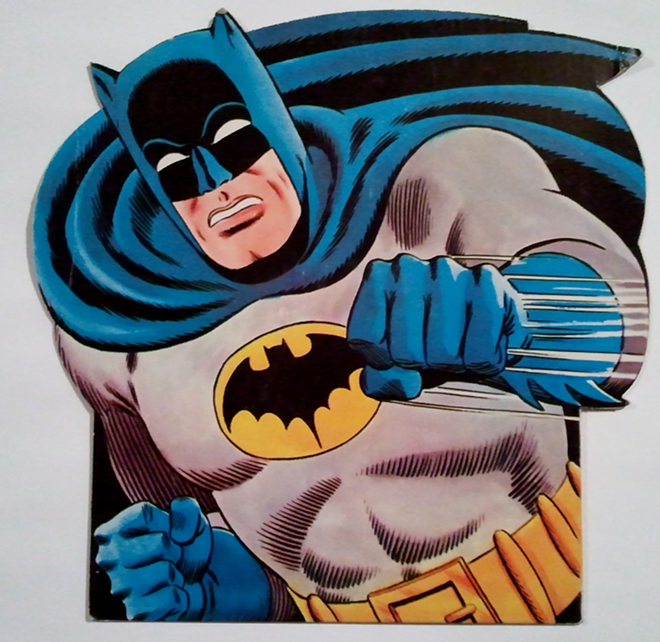 You Are My Superhero, opening Sunday at Dayton Art Institute (DAI), is here to rescue art lovers from the summer blahs. The difference starts at the door, where there’s $2 off for wearing a superhero costume.

Superhero already has saved the day for DAI Associate Director Jane Black. Upon arriving in late 2011, Black saw nothing on this summer’s schedule for the special exhibitions space. BAM! Everyday heroes at DAI stepped up with ideas linked to the release of The Avengers, The Amazing Spider-Man and The Dark Knight Rises.

Black, who was hired with new Executive Director Michael Roediger (formerly of the Victoria Theatre), says the DAI is thinking about how it’s perceived. Though familiar to drivers on I-75, the edifice seems closed-off from that vantage point, she says. While lifting the mask of Batman and other superheroes, DAI is removing some of its own mystery.

“We’re expanding the audience and broadening the reach into the community,” says Black, who headed the Dayton Visual Arts Center.

The exhibit’s homegrown nature is part of its appeal. Animation cels, limited-edition prints and superhero memorabilia are on loan from Springboro collectors Dr. Lawrence and Holley Thompson. Classic comics and other items come from Maverick’s Cards and Comics in Kettering and the Bookery Fantasy shop in Fairborn. A Superman screenprint by Andy Warhol is part of the museum’s permanent collection.

A featured hometown hero is Mike Peters, the Pulitzer-winning editorial cartoonist from the Dayton Daily News and creator of Mother Goose and Grimm comic strip.

“Everyone will love Peters,” says Black. “He’s a classic, but is not seen in (fine art) museums.”

Peters has long used superheroes in his artwork. At a May commencement speech at his alma mater, Washington University in St. Louis, he recalled receiving a handmade Superman costume when he was about 10. After that, the former stutterer said, he felt as if he could do anything. At the end of his address, Peters revealed a Superman costume under his gown and declared, “You, the class of 2012, you are Superman!”

The idea of everyman as Superman and the question of what makes a superhero are overarching themes of the exhibit, and such thoughts guide fiber artist Mark Newport in particular. His embroidered comic book covers and hand-knit costumes examine and challenge how superheroes reflect our understanding of gender, strength and protection.

In addition to droopy, full-body Batman and Captain America costumes, the Michigan artist has created new heroes, such as Sweaterman, Argyleman, a pink Bobbleman and Y Man (in reference to the Y chromosome). Newport calls his art “a critique and celebration” of superheroes. “It’s not ‘anti,’ though people can interpret it that way.” It encourages a look past the costume and the cultural ideal to the individual.

Newport, who’s bespectacled, balding and not of the stereotypical superhero physique, will don a Sweaterman costume Aug. 4.

“I’ll patrol the gallery like a security guard, or stand by the door, protecting the space, the art, the people,” he says. “Then I’ll start knitting in costume. Sweaterman’s superpower is to knit a force field.”

Being a superhero “is a double-edged sword,” Newport says. “They’re enforcing law, but not by the usual system,” making them outsiders.

“A superhero is great as an idea to emulate in its pure, good version. But it’s also restrictive and complex, and very much based in traditions of culture and conservative ideas.”

Other programming includes Jake Flannery, a Columbus College of Art and Design student who over five weeks will demonstrate the work that goes into just five seconds of animation. “We’ll help people understand how much of an art form it is,” Black says.

There’s also a Costume-Con workshop, leading up to a superhero costume ball.

“The intention (of Superhero Summer),” Black says, “is to direct others into taking on their own superhero persona.” Whatever that might be.

YOU ARE MY SUPERHERO runs July 22-Sept. 23 at Dayton Art Institute,