Prayer Flags for a Better City

Currently on view at Wave Pool gallery, 'Prayer Flags for Cincinnati' combines Tibetan Buddhism-inspired prayer flags with photographs of them being installed and displayed in locations around town. 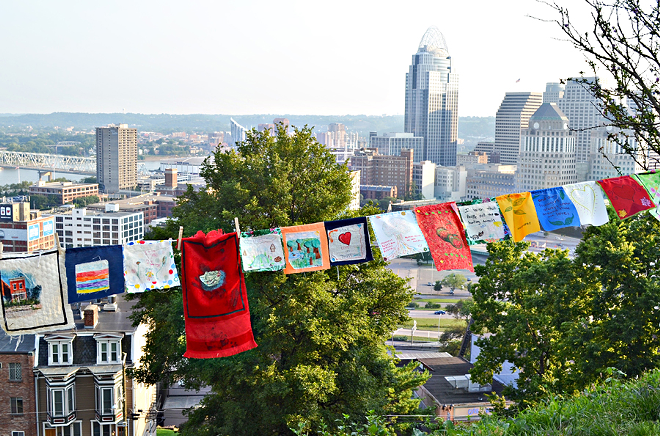 A white cloth features the image of a single brick house, its painted façade waving whenever the wind catches it. The work — a prayer flag — is a depiction of an isolated residence in Camp Washington.

That lonely building is a symbol of hoped-for change in the neighborhood, as are the other cloths that were recently displayed at locations around town for an art project called Prayer Flags for Cincinnati. Their dancing, alternating colors of blue, white, red, green and yellow represent five harmonious elements that bring balance to the world: the sky, wind, fire, water and earth.

Detroit-based artist Whitney Lea Sage created the project as a means of fostering conversation and compassion. Inspired by Tibetan Buddhism, Prayer Flags for Cincinnati, currently on view at Camp Washington’s Wave Pool gallery, combines these prayer flags with photographs of them being installed and displayed in locations around town.

Sage worked with residents to make flags and place them in locations that might benefit from an expression of goodwill.

“The idea is that by hanging these around the city you could actually change the world around you through the passing of compassion, love, goodwill and hope for the betterment of all people,” Sage says.

The flag depicting the solitary Camp Washington home, which Sage painted, was inspired by a conversation with a community member. The home has no neighbors — either as rendered in acrylic or in real life. Although occupied, it is next to an abandoned factory and stands alone. The flag presents its challenges, but offers hope for the future.

Sage is Wave Pool’s current Art Space Is Your Space artist-in-residence, a program that calls for artists to prompt community conversations and explore ways contemporary art can be a catalyst for change.

Cal Cullen, co-founder of Wave Pool, notes an inherent optimism behind the art.

“It’s kind of what you expect people to want,” Cullen says. “Healthy, happy places to live.”

Sage’s installation also shows the worries of the city: gentrification, development, waste, access, environment, economy. Though the flags depict sometimes-grim realities, their placement inspires hope. According to Buddhist tradition, the winds that pass through them will bless all else they touch.

At an opening reception last Saturday, images documenting the citywide installation covered Wave Pool’s walls. One showed a neighborhood girl with her hands folded in prayer. Flags span the tall black fence of the basketball court she stands in.

This spot, the Schiller/Hughes Playground basketball courts, is threatened by residential development in Over-the-Rhine. The artist’s statement urges support of the space. Her intent is that the newly blessed wind will bring change.

Flags have occupied a community food garden, a farm stand and a pocket park. There may yet be more, with such installations and their mantras eventually encompassing the city.

Sage made the flags out of such donated fabric items as T-shirts, pillow cases, curtains and comforters. She finds these preferable to store-bought Tibetan prayer flags.

The material used in the Cincinnati project re-envisions the flags. “I want things that remind us of the lived experience,” Sage says. (She no longer is soliciting materials, as enough flags have been made.)

Along with the conversations that arise naturally when Sage does a project, she invites community members to submit love letters, air grievances or tell a story. Postcards at the entrance of Wave Pool offer a forum to do so.

A craft space in the Wave Pool gallery holds everything guests need to make their own. The results can be touching. One flag simply reads in a child’s colorful scrawl, “We have to keep people safe.”